“This is a problem of their own making. They even brought their own internal fight to Ankara." 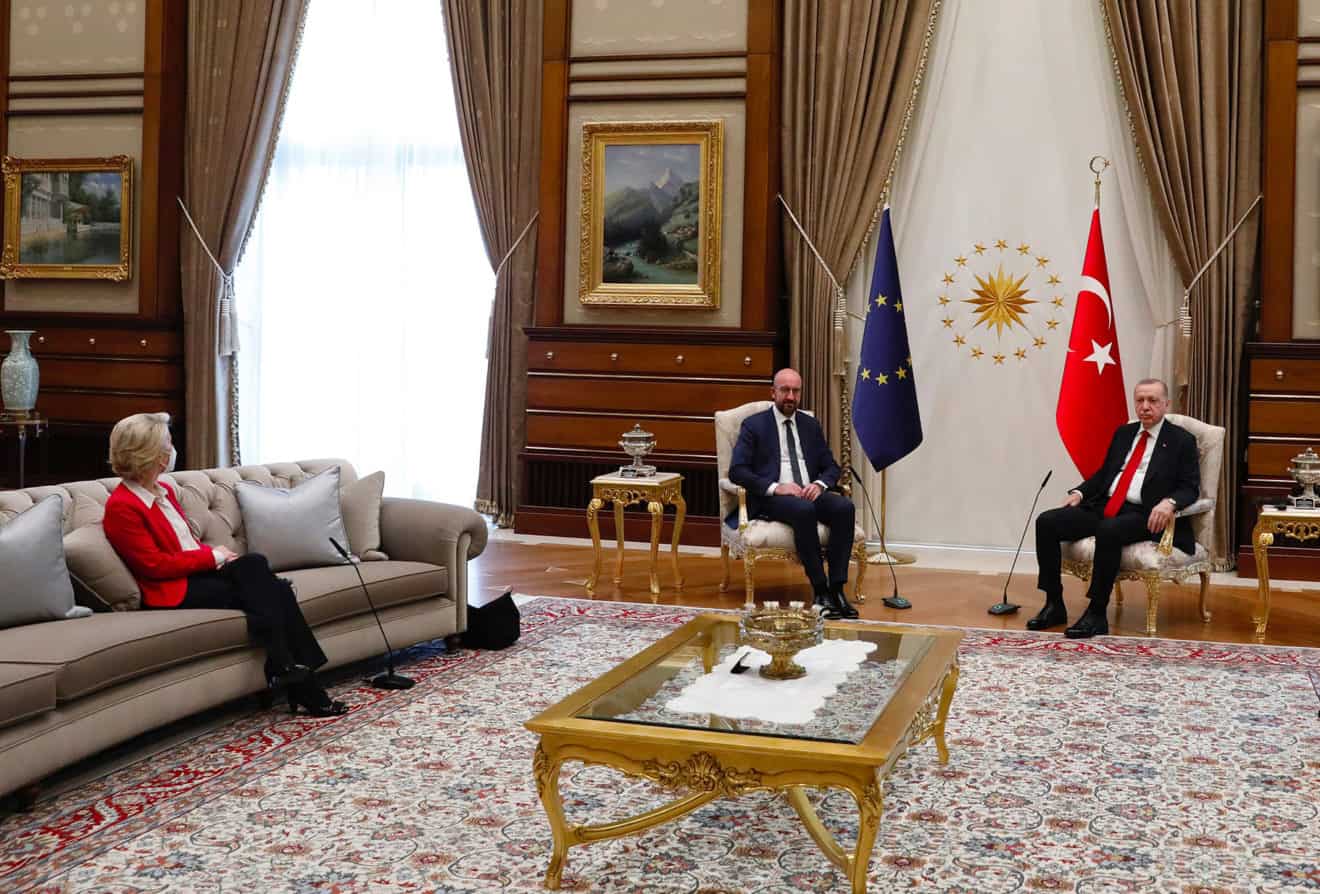 Turkish President Recep Tayyip Erdogan’s high level meeting with EU leaders in Ankara on Tuesday quickly descended into what media outlets have dubbed “sofa gate”, as European Commission President Ursula von der Leyen wasn’t given a seat and had to sit on a distant sofa.

Social media users were quick to accuse the Turkish government of misogyny or a deliberate snub as Erdogan sat next to EU Council President Charles Michel at the front of the room.

Von der Leyen was left awkwardly standing, and appeared to look around before finding a spot on a sofa, several feet away.

However, multiple Turkish officials spoken to by Middle East Eye denied responsibility for the “chair gaffe”, saying that it was all the EU delegation’s fault.

They blamed a rivalry within the EU, between Michel and von der Leyen, who are typically seen as equivalents within the Union.

One senior Turkish official said Michel’s staff agreed on the seating at the presidency before the visit took place. “However there was no representative from von der Leyen’s team,” the official said. “So we didn’t get their input.”

A second senior Turkish official said every arrangement during the visit was made in collaboration with EU officials who visited the country before the summit took place.

Turkish officials were swift to try to make it up to the European Commission president.

The government are said to have offered the EU delegation a different seating arrangement during lunch: Erdogan would sit directly opposite both Michel and von der Leyen. Yet Michel’s team reportedly rejected the offer, and Michel alone sat across from Erdogan, with von der Leyen again to the side.

“Michel’s team only accepted to give von der Leyen a seat in the same height and type,” the first senior official said.

European Union officials did not respond to MEE’s requests for a comment.

EU Commission spokesperson Eric Mamer told the media on Wednesday that von der Leyen was surprised by the incident, but she chose to prioritise substance over questions of form or protocol.

“It is not my job to try and judge what was behind the fact that we offered her one type of seat over another,” he said.

Politico reported on Wednesday that Michel’s team thought everything ran according to protocol, as Michel was higher in the diplomatic pecking order, seemingly confirming Turkish officials’ reports. However, von der Leyen’s spokesperson insisted she should have been seated exactly in the same manner as the president of the European Council.

A EU official told Politico “the Turks did not seek to cause any incident, they respected protocol and so did we”.

"Ehm" is the new term for "that’s not how EU-Turkey relationship should be". #GiveHerASeat #EU #Turkey #womensrights pic.twitter.com/vGVFutDu0S

In any case, Turkish officials are understood to be irritated by the sofa fiasco as they had been seeking better relations and good photo opportunities with senior Brussels figures, while trying to find a middle ground on the refugee deal, a customs union and other issues.

“This is a problem of their own making,” a third official said. “They even brought their own internal fight to Ankara. They should have better organised this trip.”

Michel apologises from the public about the Sofa Gate.

He said Turkey had a clear willingness to do well, but Turkish authorities’ “strict interpretation of protocol rules” has produced a desolate situation.

I mean, he basically confirms what we reported on the protocol pic.twitter.com/ZR0oR9VoV6