Turkey Seeks US Military Backing for an Air Offensive in Syria 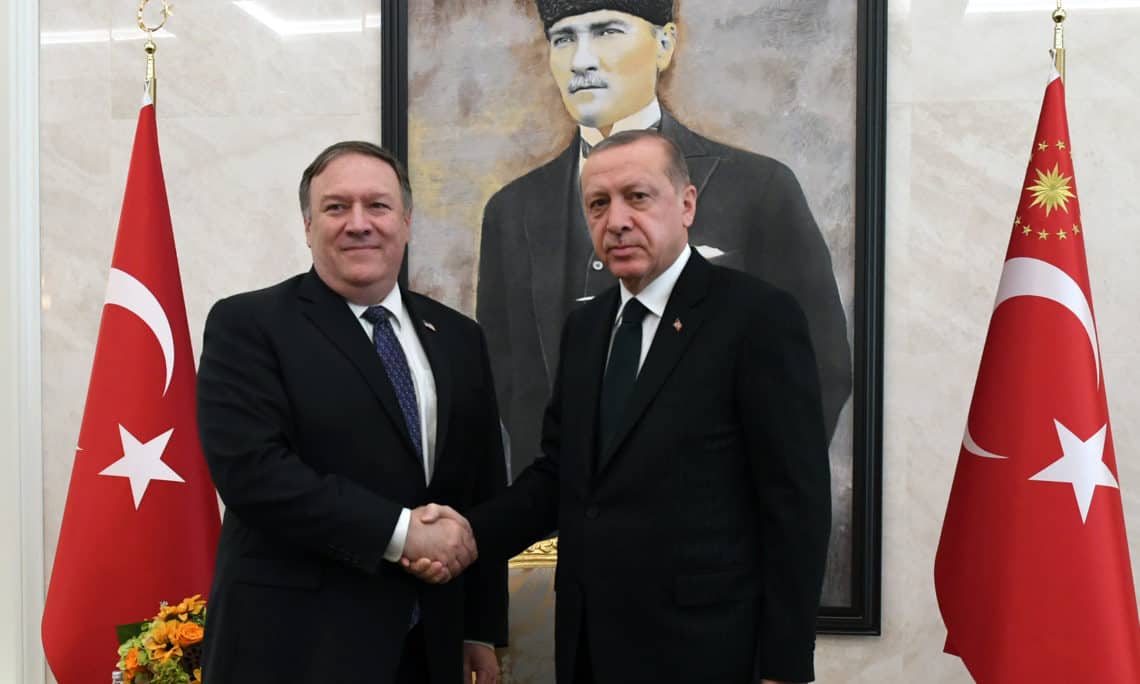 Its Syria adventure in Idlib not going very well Turkey wants the US to up its rhetorical support to actual support. The US encouraged Erdogan to wade deeper into Idlib knowing this will hurt his Russia relations, but now Erdogan wants the US to back him up in the real world, not just on Twitter:

Turkey has asked the U.S. to deploy two Patriot missile-defense batteries on its southern border to free it to punish any future attacks by Russian-backed Syrian troops, according to a senior Turkish official in Ankara.

“The U.S. has in the past sent air defense batteries to us,” Turkey’s Defense Minister Hulusi Akar told CNN-Turk television in an interview aired late Thursday. “In the same way, there may be a Patriot battery support,” from the U.S., Akar said during the interview recorded earlier Thursday. If there is similar support from European allies, Turkey would consider it, Akar said.

The disclosure was almost immediately followed on Thursday by a spasm of violence left two Turkish soldiers dead and five wounded in Idlib, underscoring the risks as two regional powerbrokers assert their influence in northwestern Syria.

The Turkish problem in Idlib is that Russia controls the skies. As we have seen in the Turkish-rebel push for Nairab which ended in a defeat that is a very big problem indeed.

An offensive vs the Syrian army while being pounded by Russian aviation, and with having nothing in the air itself to challenge the Russian bombers or support its ground forces, is a difficult proposition.

So Turkey’s idea is to enlist the Americans to its cause, get the US to deploy its Patriot anti-aircraft missiles to its border opposite of Idlib, as well as fly fighter patrols:

“Turkey is determined to use force to ensure a cease-fire in Idlib,” [defense minister] Akar said. “Russia should not intervene in Turkey’s actions in Idlib, Turkey has no intention to face off with Russia.”

The official, who’s familiar with Turkey’s policy in Syria, said Ankara could use F-16 warplanes to strike units loyal to Assad in Idlib if the Patriots were deployed in Hatay on Turkey’s border to provide protection.

• The request also included Patriots to be deployed in Hatay
• Since then Trump didn’t give any indication to Erdogan that he would commit his military https://t.co/9pw5GcZgR7

The Turkish idea apparent from Defense Minister’s words:  “Russia should not intervene in Turkey’s actions in Idlib, Turkey has no intention to face off with Russia,” is that the presence of the Americans would deter the Russians and cause them to stand down, allowing the Turks a free hand against the Syrian army (on the behalf of al-Qaeda I remind you).

Or perhaps with the US guarding their rear, they may even entertain going against the Russians hoping they can involve the Americans in the fight.

This is a crazy, desperate and reckless scheme. Or in other words, it’s just another day in the office for nincompoop Erdogan.

My condolences to the families of the soldiers killed in yesterday's attack in Idlib. The ongoing assaults by the Assad regime and Russia must stop. I've sent Jim Jeffrey to Ankara to coordinate steps to respond to this destabilizing attack. We stand by our NATO Ally #Turkey.

I’m not sure even Pompeo, when he was egging Turkey on, had in mind baiting a US war with Russia. His idea was for Turkey and Russia to fight, not for the US to pick Turkey’s chestnuts out of the fire.

So far the prospects for US support Turkey asked for do not look promising:

• Trump told Erdogan that he would sanction regime, issue strong-worded statements but nothing on military support
• Pentagon is wary to issue any support to Turkey due to last year incursion against SDF
• Interagency work is being donehttps://t.co/9pw5GcZgR7

#BREAKING US official tells VOA the US is aware of the request from #Turkey for Patriots on their border with #Syria but no decision has been made on whether or not Patriots can be provided.

• Special Envoy James Jeffrey’s efforts to repair ties with Turkey are undermined by Pentagon leaks such as a report on ending the intel coop on PKKhttps://t.co/9pw5GcHFsx