Tucker Does the World an Incredible Service, Showcases the Amazing Dr. Bhattacharya of Stanford (VIDEO)

"[Covid death rate] is much closer to the death rate that you see from the flu per case." 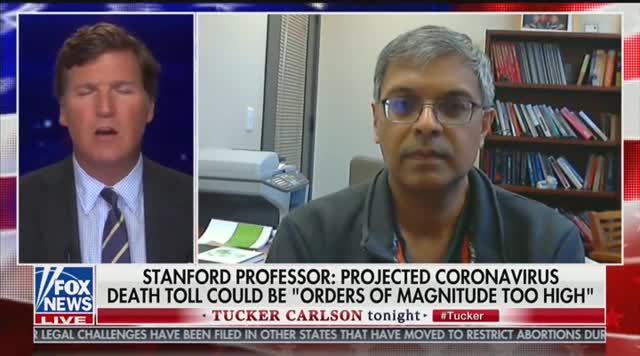 Editor’s note: If Tucker can help Bhattacharya’s upcoming research findings find a broader audience that could save thousands, nay millions of lives currently under threat by the Stone Age fans of the COVID Rouge.

“Per case, I don’t think it’s as deadly as people thought,” Bhattacharya told host Tucker Carlson. ” … The World Health Organization put an estimate out that was, I think, initially 3.4 percent. It’s very unlikely it is anywhere near that. It’s it’s much likely, much closer to the death rate that you see from the flu per case.”

“The problem, of course, is that we don’t have a vaccine,” Bhattacharya added. “So in that sense, it’s more deadly and more widespread than the flu, and it overwhelms hospital systems, the ways the flu doesn’t.”

The professor predicted that forthcoming research would give scientstists and health officials a “much more accurate understanding of how widespread this is.”

“It really seems like there’s many, many cases of the virus that we haven’t identified with the testing regimens that we’ve got around the world,” he said. “Many orders of magnitude more people have been infected with it, I think. I think that we realize that … means that … the death rate is actually lower than people realize, also by orders of magnitude.”

Bhattacharya told Carlson he was less afraid of the virus than when he began his research, adding that he hoped the improved numbers would help Americans deal with their fear of the virus.

“I’m hoping to get numbers in place,” Bhattacharya said. “We’ll be able to really sort of quell the fear that’s out there.”

7 Comments
Leave A Reply
Cancel Reply
Read the rules before you think about commenting
Telegram Group
AE has a supporting readers Telegram group where we hang out and exchange leads and takes. If you have ever donated to AE drop me a line on email and I'll send you the link to join.