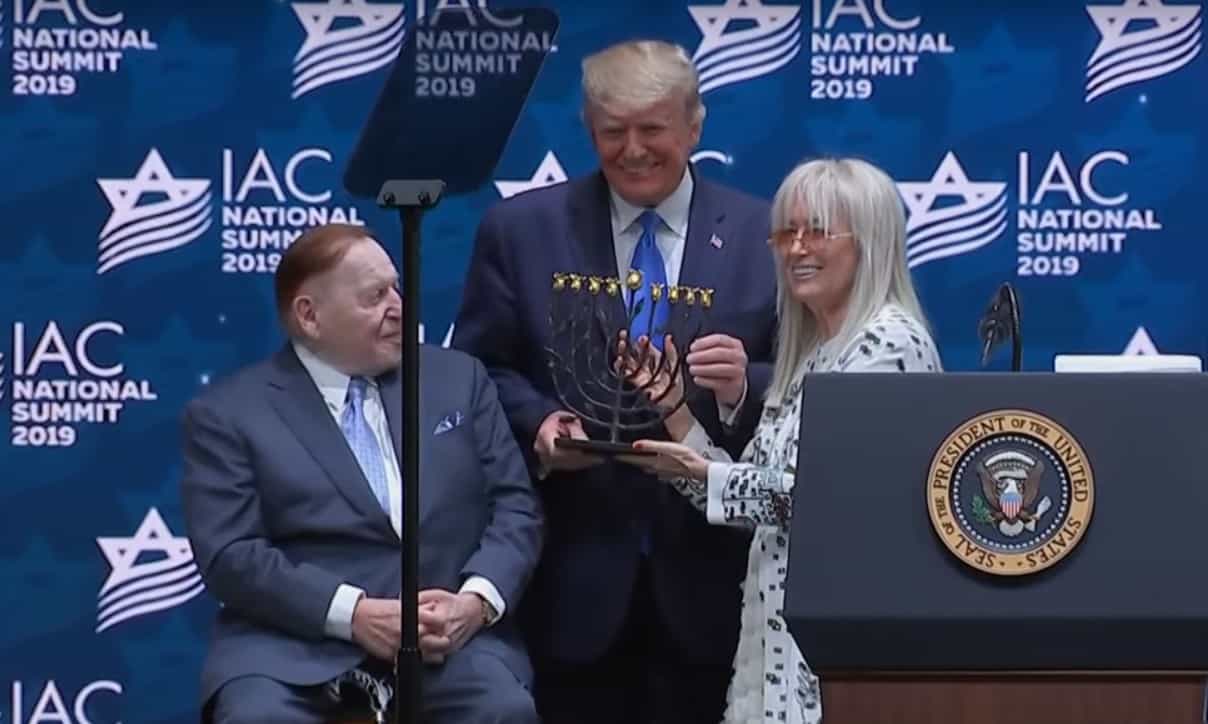 The impeachment trial has offered bald proof that Trump looks on foreign policy as a means to advance his political interests at home, and some critics of Trump’s annexation plan for Palestine have pointed out that it also has a domestic political motivation.

Joe Biden said that the plan is a “political stunt.” While Richard Haass of the Council on Foreign Relations, fills that in: “To launch it in front of what we would call a partisan crowd at the White House with the prime minister of Israel standing next to the president did the plan no favors. It immediately gave it the sense of one-sidedness and gave it a political overlay that I would argue in some ways works against the interests of those who want this to succeed.”

No Palestinians were in sight, and Trump surely was pleased by those optics. After all, the Adelsons, who have given upwards of $100 million to Republican causes, have been very close to Netanyahu.

Trump alluded to the political power of those in the room, as he blurted that he had moved the Jerusalem embassy “for you.”

And, Bibi, we have a lot of powerful people in this room — a lot of the people that can help make it work…

Jerusalem will remain Israel’s undivided… capital.  (Applause.)  But that’s no big deal, because I’ve already done that for you, right?…  As everyone knows, I have done a lot for Israel: moving the United States Embassy to Jerusalem; recognizing — (applause) –- recognizing the Golan Heights — (applause) — and, frankly, perhaps most importantly, getting out of the terrible Iran nuclear deal.  There’s a lot of spirit in this room. [LOL so Trump has openly stated he tore up the Iran deal for Israel?]

Leaving aside Christian evangelicals for a moment, Trump’s calculation appears to be that he can do what Ronald Reagan did in 1980, and take a sizeable chunk of the Jewish vote, and also Jewish donors from the Democratic Party. Reagan doubled the usual Republican haul, getting 40 percent of Jews. Israel-related factors likely contributed to Jimmy Carter’s defeat.

There are many signs that this is Trump’s game– and he has some traction. Twice last year Trump said that Democratic Party Jews are being “disloyal” to Israel, and he doesn’t understand how Jews can vote for Democrats.

Haim Saban, one of the largest donors to the Democratic Party whose only issue is Israel, announced that he supports Trump’s plan as a “blueprint” for a two-state solution. He also said that he maintains close ties to Jared Kushner, the president’s son-in-law, who is a tireless supporter of Israel.

Joe Biden was very careful in his criticism of the plan to remind people how much he loves Israel: “I’ve spent a lifetime working to advance the security & survival of a Jewish and democratic Israel. This is not the way.”

Biden has to know that many Israel-supporting Jews are “Trump-curious,” as Bari Weiss of the New York Times says, including her own father, a stalwart of the Israel lobby group AIPAC. A new Democratic lobbying organization that includes many AIPAC members — Democratic Majority 4 Israel– has been careful not to say a critical word about the plan. Nor a supportive word.

Pete Buttigieg also appears to fear these dynamics. Two days ago he walked back his promise of last fall to condition aid to Israel if it takes steps to annex the West Bank. He was quizzed about whether such a step is now necessary given Trump’s greenlight to annexation, by a member of the progressive Jewish group IfNotNow, and responded:

The US cannot be promoting annexation like it is under this president. By the way, I’m not talking about withdrawing aid or withdrawing our support to Israel…

If you’re asking me to commit to withdrawing aid to Israel, the answer is No…

The Israeli government will get the message that we are not going to support those kinds of steps. In my view they’re bad for Isrel, they’re bad for Palestinians, and bad for America.

Buttigieg is backed by among others the financier Seth Klarman, who is a strong supporter of Israel.

Buttigieg and Biden are between a rock and a hard place and Trump knows it. The progressive base of the Democratic Party is very favorable to the idea of sanctions. The party leadership is deadset against it. The party’s recently-announced list of platform committee nominees is loaded with vociferous Israel supporters, notably Ilyse Hogue, Randi Weingarten, Bakari Sellers and Dan Shapiro.

Trump is trying to drive a wedge between the progressive base and the leadership of the Democratic Party by portraying the Democrats as the party of BDS, boycott, divestment and sanctions, which he calls a “disaster” for Israel. At a rally early this month Trump mentioned Reps. Ilhan Omar, Rashida Tlaib, and Alexandria Ocasio-Cortez as supporters of BDS (though AOC has not gone that far) and smeared them as antisemites:

We have people in Congress. I don’t know where they come from. Five years ago, seven years ago, eight years ago, this is unthinkable what’s happening in Congress, but these people hate Israel, they hate Jewish people…Ten years ago if you think back there was a great love and today it’s the opposite. But I have made clear my administration strongly and forcefully condemns this dangerous campaign to inflict pain and turmoil on the state of Israel.

That was at a rally for evangelicals in Miami. Trump was working the issue with Christians, and got a lot of applause for the embassy move to Jerusalem, but no applause on recognizing the Golan.

I would argue that even that rally was pitched toward Florida Jewish voters reading his remarks. PBS News Hour had an eight-minute segment with two evangelical leaders, Richard Land, president of the Southern Evangelical Seminary and executive editor of “The Christian Post,” and Collin Hansen, the editorial director for The Gospel Coalition, a network of evangelical churches. Israel was never mentioned. The two spoke of the need for conservative judges, the freedom to pray, and abortion over and over. Never Jerusalem.