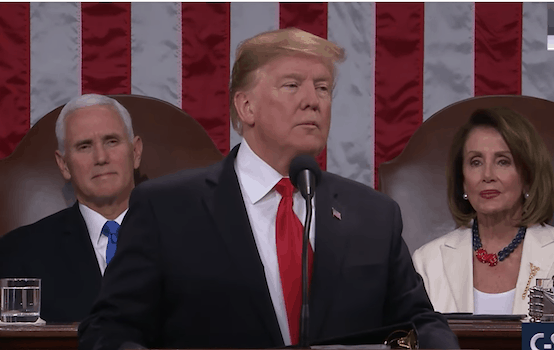 Trump’s State of the Union address tonight was a laundry list of false and misleading claims. It will take the fact-checkers the better part of the night to identify all of the misrepresentations and spurious claims that the president made as he rattled off one implausible statistic after another. The few references that Trump made to foreign policy issues predictably glossed over the many failures of administration policies.

If you knew nothing about the last three years of Trump’s presidency, the picture he painted sounded pretty good. If you have paid any attention at all before now, you realized that the country was being snowed under with an avalanche of lies and half-truths.

The most disingenuous part may have been this section on Iran:

In recent months, we have seen proud Iranians raise their voices against their oppressive rulers. The Iranian regime must abandon its pursuit of nuclear weapons, stop spreading terror, death, and destruction, and start working for the good of its own people. Because of our powerful sanctions, the Iranian economy is doing very poorly. We can help them make it very good in a short period of time, but perhaps they are too proud or too foolish to ask for that help. We are here. Let’s see which road they choose. It is totally up to them.

It goes without saying that Trump couldn’t care less about the fortunes of the Iranian people when he has spent the last year and a half waging a pitiless economic war against them. He admits that the sanctions he has imposed have done great harm to the Iranian economy, and then absurdly suggests that the administration can “make it very good.” Had it not been for the reimposition of sanctions and the additional sanctions placed on Iran’s oil and metal sectors, there would be no economic damage to repair.

Trump boasts about setting Iran’s house on fire, and then chides them for refusing to agree to his terms for putting out the fire that he set. Trump’s decision to renege on the JCPOA and launch an unjust economic war made it very clear to the Iranian government that there is nothing they could do short of capitulation that would satisfy this administration, and having been burned on the promise of sanctions relief once already there is no chance that they are going to take a chance in negotiating with the person responsible for betraying them.

Earlier in the speech he boasted about the illegal assassination of Soleimani, as if the Iranian government would enter into talks with the administration that committed this act. The president continues to feign interest in negotiations that his own actions have made impossible.

Juan Guaido made a surprise appearance as Trump’s guest, and Trump recited a couple boilerplate lines about bringing down Maduro, but it seems that Guaido was mainly there to serve as a prop for Trump’s socialism-bashing rhetoric. The president had practically nothing to say about his Venezuela policy.

Trump asserted that “Maduro’s grip of tyranny will be smashed and broken,” but the reality is that Guaido’s position is much weaker today than it was a year ago and Maduro’s grip on power appears to be as strong as ever. It is strange that Trump chose to call attention to a Venezuela policy that has completely failed, but that is what he did.

Trump congratulated himself for the annexation and apartheid plan that he introduced last week:

Last week, I announced a groundbreaking plan for peace between Israel and the Palestinians. Recognizing that all past attempts have failed, we must be determined and creative in order to stabilize the region and give millions of young people the change to realize a better future.

Of course, the plan he presented was not the least bit creative and it was absolutely not a plan for peace. It amounted to a reflexive giveaway of almost everything to the Israeli side that offers millions of Palestinians no prospect of a better future. On the contrary, Trump’s plan offers young Palestinians a future of occupation, subjugation, and lack of freedom.

In a moment of incredible chutzpah, this lawless and impeached president asserted, “With every action, my Administration is restoring the rule of law and re-asserting the culture of American freedom.” This is a president who wages illegal war, vetoes Congress’ resolutions that demand an end to U.S. involvement in the war on Yemen, orders illegal assassinations, and pardons and celebrates war criminals.

The president has repeatedly shown that he holds the Constitution in contempt, and he has routinely overstepped the limits that the Constitution has set around the powers of the presidency. He has trampled on the law and abused the power of his office many times, and his impending acquittal in the Senate trial makes a mockery of the rule of law.

At one point, the president feigned interest in ending the war in Afghanistan:

We are working to finally end America’s longest war and bring our troops back home!

That would be fine if there were anything to it, but the president isn’t doing this and those troops aren’t being brought home. Trump is paying lip service to the idea of bringing this war to a close, but everything he has done over the last year has made it much less likely that U.S. forces will be withdrawn.

Notably he says nothing about removing the troops still in Syria and Iraq, and he had absolutely nothing to say about the other parts of the forever war that the military continues to fight in the Middle East and Africa.

All in all, the speech was a long, tedious exercise in election-year pandering and demagoguery. The president’s record of accomplishments is exceedingly thin, so he has had to pad it with hyperbole and outlandish claims.

Among many other falsehoods in the State of the Union address was the president’s most common lie about Iran:

The Iranian regime must abandon its pursuit of nuclear weapons, stop spreading terror, death, and destruction, and start working for the good of its own people.

Trump and his officials routinely demand that Iran stop doing something that it hasn’t done in more than 16 years. [Actually for far longer.] This is the big lie they tell about Iran. Iran has no nuclear weapons program, and it hasn’t had anything that even resembles one since 2003.

The president and his officials keep mentioning this non-existent “pursuit of nuclear weapons” to justify a cruel and unnecessary economic war against a country of more than eighty million people.

He also keeps saying this to distract from the fact that his decision to renege on and undermine the JCPOA attacked a successful nonproliferation agreement that had already resolved this issue.

Like other Iran hawks that want to kill the JCPOA, Trump wants to be able to demagogue the nuclear issue in order to stoke fear and gain support for more aggressive policies directed against Iran. The JCPOA removed that issue from the debate and deprived Iran hawks of their pretext for conflict, and that is why Iran hawks have been working so hard to bring the agreement down. Iran has already agreed to forswear nuclear weapons, but the administration’s relentless hostility may cause them to rethink that commitment.

The Trump administration has been spreading this lie about Iran’s imaginary “pursuit of nuclear weapons” for years, but they are almost never called out for lying to the public about such an important issue. Every time that the president or another administration official repeats this lie, the public is being deceived into believing that Iran seeks weapons that it has gone to great lengths to repudiate.

Demanding that Iran stop doing something it isn’t doing is typical of the administration’s irrational and destructive approach to that country. They make impossible demands of Iran, and then say that the sanctions will be lifted only when Iran complies with the impossible. There is no modification to the existing agreement that would satisfy Iran hawks, because they will never accept anything that leaves Iran’s [civilian] nuclear program intact. Now that this unreasonable, hard-line position is now U.S. policy, Iran has no incentive to negotiate even if it thought the U.S. could be trusted to honor an agreement.