Used to be 3 meters per px 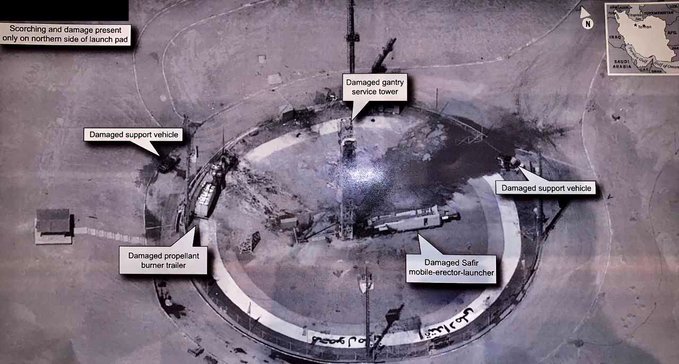 At the end of August, US President Donald Trump released a photo from satellite imagery showing the launch pad of the Imam Khomeini Spaceport at the Semnan Space Center in northern Iran, where a launch of an Iranian Safir space rocket failed. It was Iranian’s third attempt to loft a satellite into space, after two launches in January (Simorgh) and February (Safir) were unsuccessful in placing satellites in orbit. More than two-thirds of Iran’s satellite launches have failed over the past 11 years, a remarkably high number compared with the 5 percent failure rate worldwide.

The United States of America was not involved in the catastrophic accident during final launch preparations for the Safir SLV Launch at Semnan Launch Site One in Iran. I wish Iran best wishes and good luck in determining what happened at Site One. pic.twitter.com/z0iDj2L0Y3

In contrast to publicly available satellite imagery from Planet Labs and Maxar Technologies, the resolution of the tweeted imagery was with approximately 10 cm per pixel stunningly good. The imagery was probably shot by the USA-224 aka NROL-49 spy satellite, which is based on a KH-11 KENNEN (Block V) design. It shows the capabilities of the current generation of US spy satellites.

The photo used in Trump’s tweet probably was made by a cellphone. However, it seems that Trump did not tweet the satellite image immediately, because the black box at the top left corner was added after the shot and probably hides the level of classification on the original image.

David Schmerler, a senior research associate at the Middlebury Institute of International Studies, who closely examined the satellite imagery said that the image in Trump’s tweet revealed many details that reinforced the idea of a fueling or final-preparations disaster. For instance, the launching tower was still in the middle of the launching pad rather than having been pulled back — the standard Iranian practice.

For more details, the excellent and informative video produced by Scott Manley about the satellite imagery and the US spy satellite behind it, is highly recommended: