Put two and two together

Trump murdered Qassem Soleimani for “saying bad things” about the USG, according to The Hill. The president, gathered Friday at Mar-a-Lago with donors and supporters, also threatened Ali Khamenei, Iran’s supreme leader.

The so-called “Supreme Leader” of Iran, who has not been so Supreme lately, had some nasty things to say about the United States and Europe. Their economy is crashing, and their people are suffering. He should be very careful with his words!

In other words, if the leader of Iran criticizes the USG for wrecking Iran’s economy and forcing hardship on the people through sanctions, he might find himself targeted by a Hellfire missile.

For Trump, however, criticizing the USG for its endless war crimes comes in second to personally insulting the stable genius. On the day Trump made this threat, Khamenei characterized Trump as a clown, and this prompted the president to basically say he will kill the leader of a foreign nation for saying bad things about him.

Iran’s supreme leader said President Trump is a “clown” who only pretends to support the Iranian people but will “push a poisonous dagger” into their backs https://t.co/Yf8B1yKiVj

This one got under #Trump's skin – 'vicious clowns' – “[Soleimani was] the anti-terrorist Commander of the whole region,” #Khamenei said. #Iran pic.twitter.com/YaETfBX3nM

It should be noted Khamenei is not stranger to assassination attempts. In 1981, Mujahedin-e Khalq tried to kill him with an exploding tape recorder, which seriously injured Khamenei, who was Iranian president at the time. His right arm was paralyzed by the attack.

MEK was delisted as a terrorist organization by Hillary Clinton when she was Secretary of State. The murderous organization, guilty of killing American citizens, is lauded on both sides of  the artificial political divide. For instance, the former Marxist terror cult has shared friendly relationships with the likes of Rudy Giuliani, John Bolton, Ed Rendell, R. James Woolsey, Porter Goss, Louis Freeh, Michael Mukasey, James L. Jones, Tom Ridge, and Howard Dean. Most receive piles of money for their support.

Imagine the result if Trump was injured by an exploding tape recorder and the culprit was Iran. The exceptional nation, with its neocons running foreign policy, would waste no time bombing the hell out of Iran, killing thousands, and this would be cheered on by the American people, so easily hoodwinked and ready to believe lies.

Iran has to go because it is a symbol of resistance to bankster neoliberalism. Donald Trump is the current Mafia don for the financial elite. He is threatening to kill the top leader of Iran—its spiritual as well as political leader—and if he manages to do that, there will be serious blowback, not only against the USG military bases scattered around the Middle East, but quite possibly in the American heartland as well, including the targeting of neocons and others pushing for a war that would benefit Israel and further deplete America’s treasure (or rather, require more debt piled on future generations) and spill an incalculable amount of blood.

Zionist Paedophile Swamp Trump tries to cover his rapos on the Lolita Express…Trump is modern Sweinstein!!!

Anti-Empire, Please, How about an Article investigating how to Boycott America ?

It’s not entirely easy. Most of us use computers with CPU’s made by AMD or Intel, both American companies.

Trump is just the latest incarnation of US insanity since the end of Cold War v1.
The warmongering has been on a straight trajectory from Clinton, through Bush and Obama to Trump. The only difference is their public persona. All the rest is the same. War, threats, lies, deception, chaos, plowing and plundering.

These stupid Iranians still would do nothing if trump pulled that off. They should be retaliating NOW every day in the downtown of yankystan itself. But no. They refuse to fight back. They could be doing it very effectively everywhere but still no dead yankys. WTF? But we get to hear Iran say how much they will do this, do that, etc LOL LOL. What a windbag. They won’t do any of the things suggested here at the end of this article. We can only dream of such great events happening.
FIGHT BACK YOU IDIOTS. Pay these yankys back. WTF is the matter with you there?

Ya know, of all the political analysis about the US murder of Soleimani, I kept thinking, this is just a jab to feel them out. If the jUS can murder Iran’s top leader and their response is to missile some empty fields outside of jUS bases THEN shoot down a commercial airliner full of Iranian citizens, wellllll…. Pretty week, the war hawks hovering over DC must understand clearly now that (a) Iran has NOTHING and (b) God Emperor Puntang ain’t going to do shiite.

Gotta agree with you on both items Frank. The tin a pooh won’t do anything so it looks like Iran gots nothing to lose anyways. So might as well start hunting yankys down and eliminate them where ever they are.

Isn’t this a little simplified? 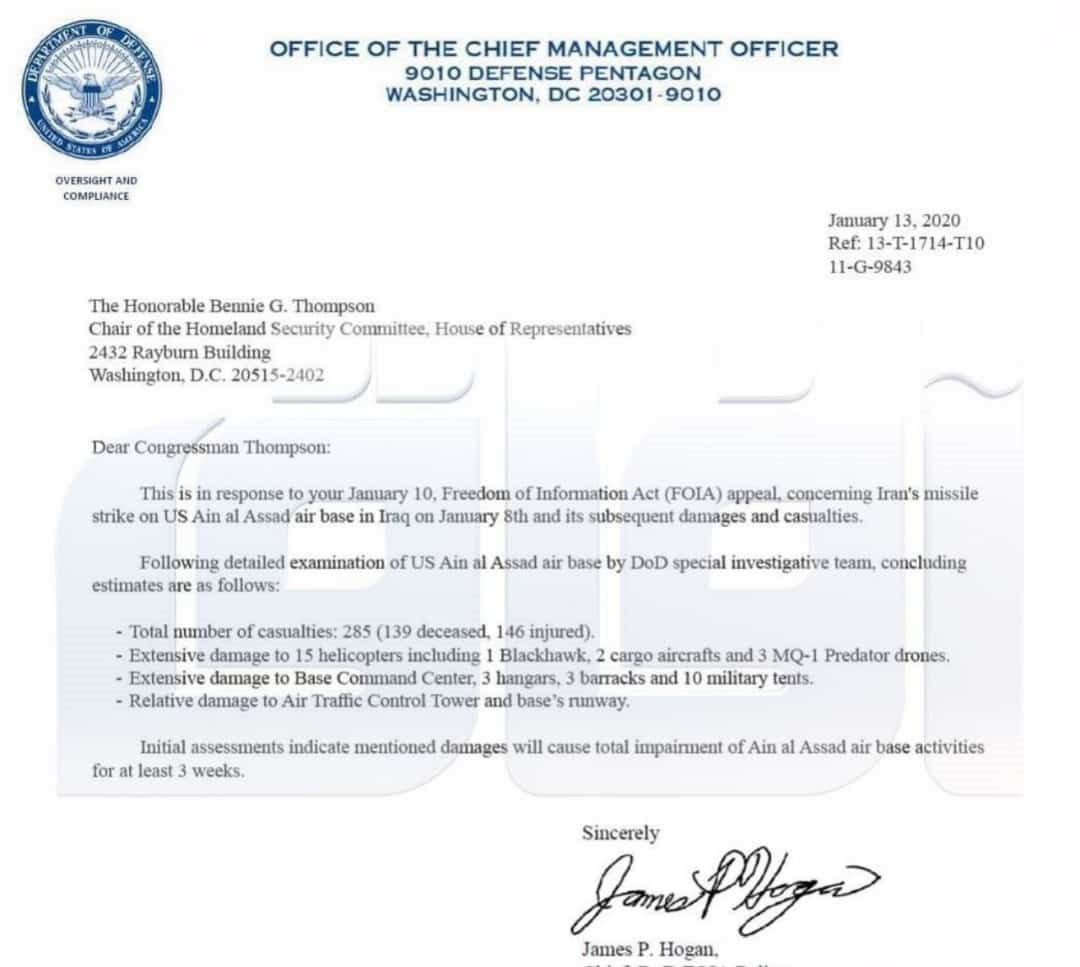 u r too kind—amerikans r a barbaric, shallow infantilized people—“over conformist automatons”…something long recognized by scholars—Gorer, Galtung, Slater, Riesman, Sennet, Cross, Berman, Hofstadter, etc. “nothing can thrive in America unless inflated by hyperbole and covered w a fine coat of fraud. amerikans cannot think except by means of slogans–they identify garbage as quality. the stupidity and ignorance of amerikans has long been a topic of hilarity in Europe”. Paul Fussell

So you personally know most Americans do ya? Must get around from your shit hole nation quite a bit there boi.

you just proved it…… insanity is your virtue……
by the way….. you live already in a shithole….. from coast to coast…..

Will the citizens of the US really let this crazed buffoon run its foreign policy into the ground while threatening to kill off a leader of a sovereign nation?? This orange airhead has got to be stopped – and it certainly isn’t going to be done by Congress…no matter how hard the Democrats have worked to do it – with lots of evidence proving the clown deserves to be kicked out of office….this is where the 25th amendment should come into play..
removing a president for extremely idiotic and crazed actions..and not mentally fit for office ..not having the wherewithall to continue running the country the way a president should. No one elected him the dictator but he certainly is doing everything in the White House and beyond to show that he thinks he is. Out Damn Spot! The president of the US is totally insane and a danger to the country.

sadly…..Trump will be re elected…..and more of concern, there is no one any better…..

Mary E, Trump is a cowardly murderer, a compulsive liar, a common thief and a war criminal, but he’s no different to any other US ” president ” Every single one of them engaged in the invasion of sovereign countries, to establish puppet governments with the primary purpose of rape and pillage, they all butchered millions, started wars and used weapons of mass destruction etc etc. They all engaged in false flag operations, killing many American citizens, for their own nefarious purposes….Pearl Harbour, USS Liberty, 9/11 etc etc. Not all the American people are so stupid that they’re unaware of these facts, but they’re equally as guilty….complicit by complacency and silence. They see themselves as special, as exceptional, but the chickens are coming home to roost. Worldwide, ordinary people loathe and detest America and everything it stands for, they will make sure the dollar crashes, that America withdraws its occupation forces from around the world and its malign influence is wiped from the face of the earth !

Unfortunately, in the US, insane SELLS.

There are about 100 million Americans who are CONVINCED they are going to go to Heaven, and they believe what they are told at church – that if they want to go to Heaven, they have to support the #1 Terror State on Earth – AKA Israel.

more than 100 millions……and that’s really very scary…..
the biggest danger comes from the judeo-evangelical fake Christian….totally fanatized….extremely dangerous in their insane belief….these including holding positions in all the military aka boomers, silos, etc…..

One of the Christian Recruiters at the YMCA – an old guy who spends his retirement looking for Christian recruits, spreading the “Gospel” at the gym, has said literally,

“when Jews are allowed to commit crimes in Silicon Valley, it makes me feel good as a Christian because I know Prophecy is being fulfilled.”

That’s his answer to the theft of the Winklevoss brothers’ Facebook software, by Mark Zuckerberg.

I’m afraid American Christians are the primary enabler of the Israeli Terror State.

Of course, in rural USA, there are a lot of retired veterans, who have a DEEP psychological commitment to believing that the wartime murders they committed were justified.

Basically we’re talking about Trump’s “base”.