"If I were Iran, I would want to pull out of the JCPOA as well" 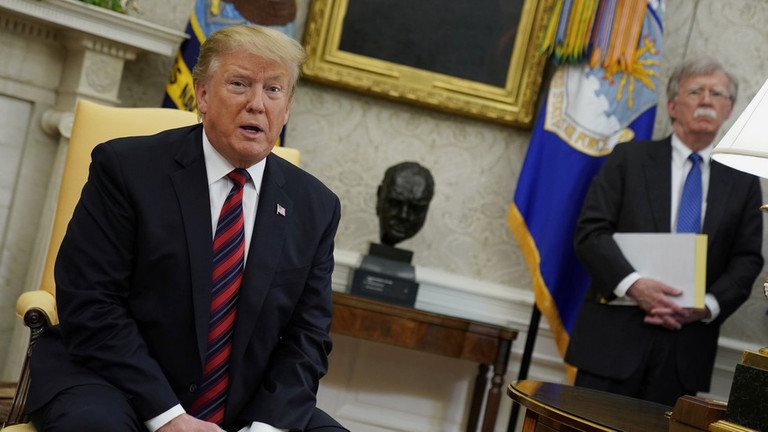 US President Donald Trump does not appear to be in control of his own administration’s Iran policy and he should fire national security adviser John Bolton, special adviser to EU foreign policy chief Federica Mogherini told RT.

In an interview with RT’s Sophie Shevarnadze, Nathalie Tocci said Trump has “been led into a very different direction” than the one he might otherwise have gone in without input from Bolton.

Asked why she didn’t trust Trump’s claims that he does not want regime change in Iran, Tocci said Bolton clearly has a different position – and he seems to be the one writing the administration’s policy on Tehran.

Unfortunately at the moment it seems to me that the US’s Iran policy has a very clear author and that author is not the president of the United States.

Tocci noted that Bolton’s enthusiasm for regime change in Iran dates back “way further” than Trump, to “the Bush administration and even earlier.”

“Perhaps [Trump] should try and change his national security adviser that very clearly has a very different position on this one,” she said.

Tocci also said that she understands Iran’s threats to breach the 2015 nuclear deal in light of heightening tensions with the US. Last week, the US accused Tehran of attacking two oil tankers in the Gulf of Oman, but provided no strong evidence to back up the accusation.

“If I were Iran I would probably not stick with the JCPOA because indeed, as I said, the social contract can only hold if both sides live up to the bargain,” she said.

OA because indeed, as I said, the social contract can only hold if both sides live up to the bargain,” she said.

If I were Iran, I would want to pull out of the JCPOA as well – Mogherini’s adviser

SS: Federica Mogherini has said that EU will continue boosting defence cooperation between the member states and at this point the Pentagon was just, like, if EU shuts out the American companies out of defence contracts then Washington will retaliate. Do you think you will stick to its guns when it comes to defence contracts?

NT: I think that we don’t have much of a choice. I think we have to. This is really about quite aside from the Trump administration. A structural transformation which is going on in the world really, and it is clear that in a world in which there are the Americans, the Chinese, the Indians, the Russians etc. Europeans can only really be a player at that global top table by standing united. We are already united on the economic front and we increasingly understand that we have to do so also on the defence front. Let me be very clear, this is not in order to be protectionist. You know, when we talk about autonomy as an ambition, as a goal, the bottom line is basically having the ability to act. Now, it’s part of our DNA to try and act together with our partners whenever and wherever we can. But what if our partners don’t want to act with us? Then we need – and we feel we need to have the ability to act on our own.

SS: So the big question whether you can act on your own or not, is the Iran deal. So right now Rouhani is saying that, you know, “I’m going to withdraw from JCPOA unless you stand firm and show some courage”. Do you think this is the last warning to the EU? Do you think Tehran is actually serious about quitting the deal?

NT: I think, and all I can say about this is, putting myself in Iranian shoes, and if I were an Iranian decision maker I would probably be making these threats rightly so. I mean, it’s clear that if one side of a contract lives up to their commitments, meaning Iran and the other side, meaning the other E3+3, and obviously this includes Russia as well, it’s only fair for one side to say, “Hang on, you know, if you continue acting this way I’m going to pull out”. Now having said that, I also think that it would be actually fairly irrational for Iran to leave the JCPOA before 2020 simply because it is basically a year and a few months time before there could be a change in the United States…

NT: Or not. And indeed if the answer is not, then indeed if I were Iran I would probably not stick with the JCPOA because indeed, as I said, the social contract can only hold if both sides live up to the bargain.

SS: But many analysts are saying that Rouhani is behaving this way because he wants to exert some pressure on EU. Do you think Tehran’s expectations are legitimate?

SS: Can he do something to actually move you to act?

SS: Oh, it could come to that.

SS: Well, you know, Russia couldn’t care less. You know that, it just continues trading with Iran and luckily Russia has its own oil so it doesn’t need to…

NT: It hasn’t done so as much as the Iranians expected it to do.

SS: True. Everyone’s being cautious but still it doesn’t go along with American line. But the Europeans, like you, a lot of them, were outraged, like, you know, “this is not in our interest to scrap this deal, so we’re going to continue doing our thing with Iran”. But then, you know, when Americans are slapping sanctions, from what I understand, most of the major companies are wrapping up and leaving.

NT: This is what I mean. The point is how to create a global investment climate that induces companies to make those investments even in the event of U.S. extraterritorial sanctions. So obviously you’re absolutely right. There are more European companies in this situation than Russian companies but this affects everyone. And, you know, of course, governments cannot point guns at the heads of companies forcing them to do so. What we have to try and do is to create an international investment and trading environment that allows for companies to freely engage in those investments and trade without being unduly punished for it.

SS: I know that you’ve been saying that the U.S. and Europe have very different objectives vis-a-via Iran: EU’s sort of seeking to contain Iran’s nuclear program and America wants regime change in Iran. So Trump obviously who very often changes his mind now says that Iran could be a great economy under Rouhani and he doesn’t want a regime change there. Why don’t you trust him?

NT: Well, because perhaps he should try and change his national security adviser that very clearly has a very different position on this one.

SS: I mean he has a lot of disagreements with a lot of people within the administration. But at the end of the day you got to give it to him, he does what he wants to do.

NT: I think, unfortunately, on Iran he’s actually been led into a very different direction. As I said, particularly by John Bolton whose positions on Iran date back way further down, sort of back the line, you know, in the Bush administration and even earlier. So unfortunately at the moment it seems to me that the U.S.’s Iran policy has a very clear author and that author is not the president of the United States.

While calling for “maximum restraint,” Mogherini additionally emphasized that Iran has still remained “compliant with its nuclear commitments” under the international agreement the JCPOA, despite the fact that Washington illegally violated the deal in May 2018 and reimposed suffocating sanctions on Tehran in November.

"Our assessment on the implementation of the #IranDeal is based on the factual, technically sound evaluation that @iaeaorg makes in its reports. And so far Iran has been compliant with its nuclear commitments. Our focus is to keep the agreement in place" @FedericaMog pic.twitter.com/pQMMioSpIK