Trump Is Right: The US Does Indeed Need a Space Force

"Do you want your kids to have to speak Martian? Thought not"

Right now, America has only a pathetic five divisions of the military: Army, Navy, Air Force, Marines and Coast Guard. We desperately need a sixth. And what could be more fitting for our President than fulfilling this need with a brand new spanking Space Force. Thank goodness Mr. Trump has now called this new initiative into being.

The case for the Space Force is overwhelming. Consider the following.

The Martians may attack at any moment. Do we have to wait for an actual invasion of the creatures from the fourth planet to protect ourselves? No. The threat thereof is imminent. If we wait, it might be too late. Do you want your kids to have to speak Martian? Thought not.

Then there is the fact that we simply do not have enough wars on the surface of the planet. The US is engaged, currently, only in some half dozen such conflagrations. We need more! How better to promote this than with a Space Force?

Our esteemed president has finally succeeded in setting up this important new initiative of his. Previously, those nattering nabobs of negativism in the congress gave this ingenious new proposal the backs of their hands.

For example, according to Senate Majority Whip John Cornyn, R-Texas, “Traditionally, this has been a role played by the Air Force, and I’ve not yet heard a compelling case why we need a separate force. Maybe there is a case to be made, I just haven’t heard it yet.”

This is no way to run a railroad. With this sort of sentiment, we would only have a limited military, instead of our present five branches. Had this non-expansionist viewpoint held sway, we never would have landed a US taxpayer on the moon. Our manifest destiny, to rule the entire planet, whoops, I meant, entire landmass of the forty-eight states, never would have been accomplished. We would not have invented electricity with that sort of mindset. So, thanks to Mr. Donald Trump: he will now make space GREAT AGAIN.

But Cornyn is not the only spoke in the wheel of ever-increasing government. Stated Senator Richard Shelby, R-Ala., Senate Appropriations Committee chairman “My concern might be satisfied with, you know, information, but do we need to create another Air Force, Army, Navy, Space Force, and will that be another bureaucracy? Will that help us do things that we can’t do within the Air Force?”

But if this doubting Thomas, this peace-nik, this sissy, so opposes “bureaucracy,” should we reduce our bureaucratic military? Of course not. We have enemies all over the place. There’s a plot to invade us under every bed. Opposition to the Space Force amounts to surrender to our adversaries.

Let us rehearse the reasons.

For one thing, it will create numerous jobs in earth excavation.

For another, there are the Morlocks, who may well attack; they are a more realistic threat than Martians; heck, we’ve seen more of them in the movies! We would do well to ready ourselves for their incursions. How better to obviate this obvious threat than with a new Underground Force

Further, our president has not yet determined the symbol for his new Space Force. He will soon be turning on the money spigot with a survey to see which one the public favors. There will be no problem in this regard with the Underground Force. A big fat worm! And, we can even see through our crystal ball a motto for this seventh branch of the military: “Worms are us!”

And what about a Fourth Dimension Force? You nay-sayers are stuck in your limited three dimensional world. There’s a fourth dimension out there somewhere, don’t ask me where, just waiting to be militarized. We’ll need scientists, philosophers, mathematicians to study this newly discovered threat to our nation (think of all the great jobs created in these new fields!) Who knows what dangers lurk in the fourth dimension? We would all sleep far better if Mr. Trump would inaugurate not only a new Space Force, and an Underground Force, but also a Fourth Dimension Force.

Am I leaving out any other possible military expansions? Enquiring minds want to know.

In the view of the economically illiterate (are you listening, Mr. Trump?) wars are good, they create jobs. Interstellar or space wars are no exception to this general rule. Ditto for those taking place underground, or in the fourth dimension.

Actually, this is just an embodiment of what economists call the “broken window fallacy” but since Trump never passed a course in economics 101, we can safely count upon him to succumb to it. But, for those who are interested, consider the following: A hoodlum breaks a baker’s window with a rock, which creates jobs for the glazier, who purchases a bicycle, etc., spreading the wealth all around. He is a hero? No. The economy would be better off with an intact window, and the baker being able to purchase the bike, directly, obviating the need for the glazier, in this case. Or, use him for a double glazed window, and then carry on.

No matter how you slice it, we are always one window shy, if the hoodlum engages in this mischief. As for the Japanese and Germans being able to outcompete us after the Second World War (they had new factories, we had old ones), we could have built plenty of new ones had we wanted to. Ditto for the present forest fires recently engulfing our nation. Think of all the jobs necessary to rebuild. Hey, let us burn down the entire country; we will become rich!

Trump’s been sucking back too many diet Cokes. Either that or Gina has been spiking them with LSD.

As our infrastructure collapses around while running not walking to Nuclear Armageddon over some shit hole in the desert called “Israel” that sucks up 11 million bucks a day. We need to head to the stars.

If Mars were to attack, the Earth would have to utilize the hideous weapon used in the film, Mars Attacks…………..country music. Subjecting humans to this wailing, whining noise would be far more evil than destroying the Martians on their own planet.

This is just hilarious! Unfortunately, the US cannot afford a comedian in chief residing in the White House and turning every wild dream he has into some sort of costly reality. It just doesn’t work like that….economically speaking.

I could see a bunch of fat drunks sitting in a VA hall 50 years from now saying….if it wasn’t for trump we all be speaking martian now

amerikans cannot produce decent fighter jet; the f-35 joke is plagued w over 800 deficiencies (DOT&E); presently they require Russian engines to travel to the international space station
impoverished central amerikans illegally enter the USA; their incompetent police state is unable to staunch the tons of coke and meth that floods US homes and bars….perhaps they r so cognitively damaged by decades of marijuana and other substance abuses that they believe that their Star Trek enemies r real 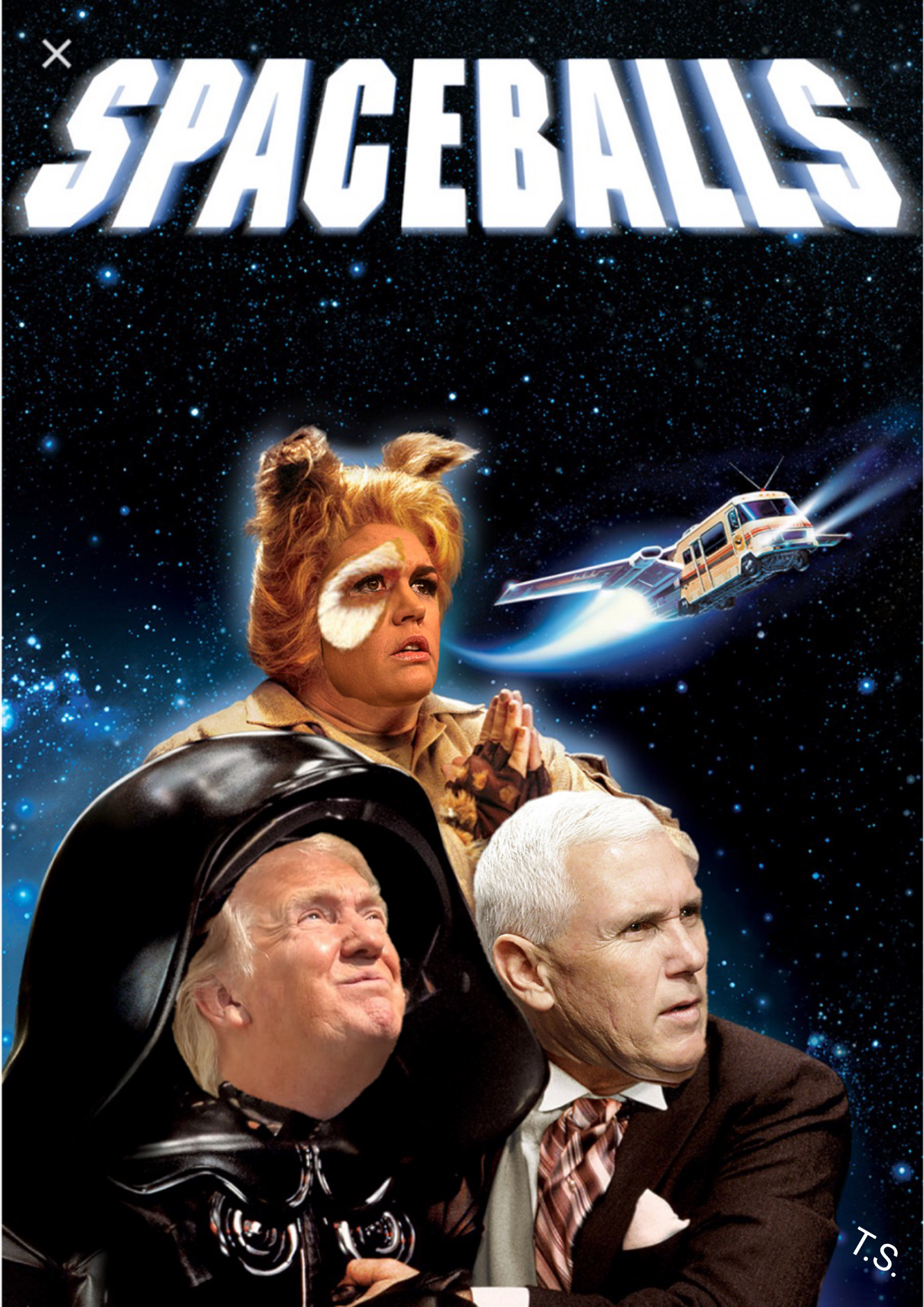 What the United States really need is a Space Farce!

Both Russia, and China have declared that the U$ weaponizing space crosses their red line. Time will tell if they will react, and what form that reaction will take. Now, about those Russia particle beam weapons?

Never was a ‘pandemic’ except in the small minds of ...
9

“The structures and freedoms that once felt so unassailable have ...
9

Afghanistan Buries Another Empire
3 Mar 21 by Kris
ALL evidence leads to the MOSSAD and CIA, without any ...

Afghanistan Buries Another Empire
3 Mar 21 by Kris
Indeed, Osama, the Taliban or Afghanistan had ZERO to do ...

Previously Unreleased Footage of Iranian…
3 Mar 21 by Sally Snyder
Here is an article that looks at Iran’s latest moves ...

Orban Gets a Sinopharm Jab,…
3 Mar 21 by Jerry Hood
The Slovak PM Matovič was declared massmurderer( 7,000 deaths in ...