It took far too long to happen; let's see who Trump finds that is even more horrible

A feud between John Bolton and Trump finally blew open today. There are conflicting stories about what happened.

I offered to resign last night and President Trump said, "Let's talk about it tomorrow."

I informed John Bolton last night that his services are no longer needed at the White House. I disagreed strongly with many of his suggestions, as did others in the Administration, and therefore….

….I asked John for his resignation, which was given to me this morning. I thank John very much for his service. I will be naming a new National Security Advisor next week.

Ambassador Bolton sends me a text message just now: “Let’s be clear, I resigned, having offered to do so last night.”

Offering to resign is not resigning.

His departure comes as Mr. Trump is pursuing diplomatic openings with two of the United States’ most intractable enemies, efforts that have troubled hard-liners in the administration, like Mr. Bolton, who view North Korea and Iran as profoundly untrustworthy.

The president has continued to court Kim Jong-un, the repressive leader of North Korea, despite Mr. Kim’s refusal to surrender his nuclear program and despite repeated short-range missile tests by the North that have rattled its neighbors. In recent days, Mr. Trump has expressed a willingness to meet with President Hassan Rouhani of Iran under the right circumstances, and even to extend short-term financing to Tehran, although the offer has so far been rebuffed.

He repeatedly called on Tump to “Bomb, Bomb, Iran”

He never should have been hired in the first place.

Of all Trump’s appointments, Bolton was the worst.

The words “worst” and “good riddance” do not come close to expressing my feelings.

National Security Advisor John Bolton was an enormous security threat to the United States of America and the world in general.

For lack of anything else powerful enough to add, “Good Riddance”. 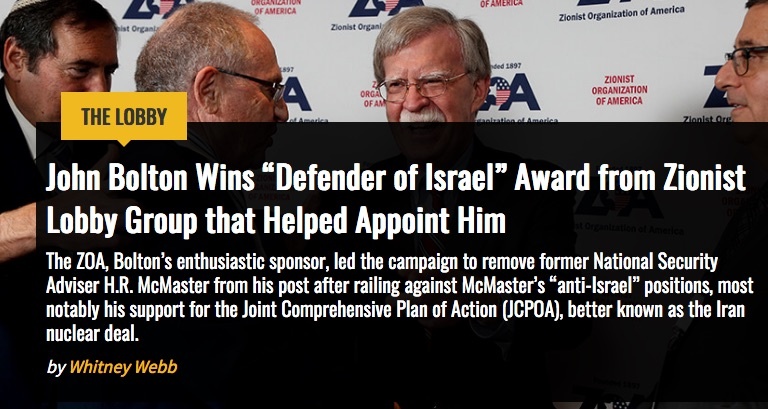 IS Bolton going back to live in Occupied Palestine now with all the other Russian Expat & spawn thereof zionist NON Semitic Khazarian outcaste Mafia from the Steppes of Russia “citizens”?

Get out of America!

Good Riddens. This guy is a war monger who has gone behind the backs of presidents and made his own policies. The next hachet job should be pompeo. This guy is like another poison dart. His track record is blood. We have come close to nuclear disasters just because of these guys efforts to undermine the president and make decisions without even consulting. He should be tried for war crimes. HE sure ain’t through yet, When CNN hires him he will be really sturing the pot. HE IS PART OF THE SHADOW GOVERNMENT. I wish it didn’t take so long to get rid of these guys. Now we need to try to put back together all the wrong done by the damage these guys caused. just harry is right, what filth comes next??

And what piece of filth comes into his place? Conny Rice?

Biggest piece of filth is trump himself; get rid of him but unfortunately the other candidates for POTUS are just as bad.
Can’t keep blaming Bolton when filth hires filth and trump is the boss.

Bolton gets the blame for trump’s action. POTUS is the boss not Bolton and it appears that Bolton has done his job under trump’s instructions and has made trump appear as the ‘good guy’. Stupid games being played by stupid people.