Trump Doubles Down on Military Out of Afghanistan by Christmas 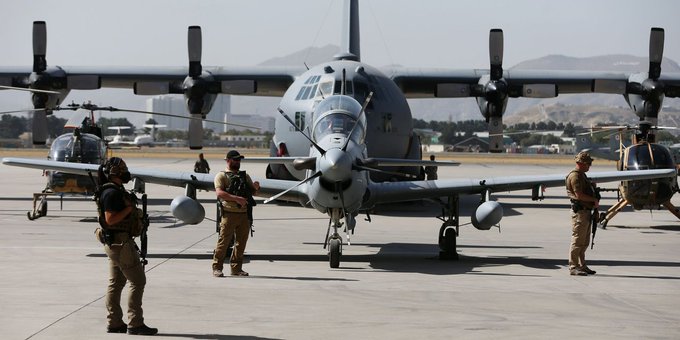 President Trump reiterated a surprise declaration he made via Twitter on Wednesday night. In Wednesday’s tweet, the president said all US troops in Afghanistan should be home by Christmas.

Speaking to Fox Business on Thursday, Trump reinforced his desire for the Christmas deadline. “We’re down to 4,000 troops in Afghanistan. I’ll have them home by the end of the year. They’re coming home, you know, as we speak. Nineteen years is enough. They’re acting as policemen, OK? They’re not acting as troops,” he said.

President Trump’s tweet on Wednesday came just hours after National Security Advisor Robert O’Brien said there would be about 2,500 US troops in Afghanistan by early 2021. The withdrawal is scheduled to be completed by May 2021 as per the US-Taliban peace deal that was signed in February.

Talks between the Taliban and the US-backed Afghan government are ongoing in Doha. While the intra-Afghan talks were delayed for months before they got started, and violence between the warring parties continues, the US troop drawdowns have actually been ahead of schedule.

For their part, the Taliban welcomed Trump’s new plan and called it a “positive step” for the US-Taliban agreement.

An unnamed Trump administration official told the AP News that Trump’s tweet “laid down a marker” on US troop withdrawals from Afghanistan, and “since he is the commander in chief, the rest of the administration will follow his lead.”

AP and other news outlets spoke with unnamed US officials who voiced their disapproval of Trump’s Christmas deadline. Many of the officials said the tweet hurt the Afghan government’s leverage over the Taliban.

President Trump’s tweet on Wednesday about US troops in Afghanistan coming home before Christmas took a lot of people by surprise. While the Pentagon offered no official statement on the president’s comments, anonymous US officials made sure to let the media know of their disapproval of the plan.

Unnamed officials told Fox News how the tweet could have hurt the “delicate” negotiations with the Taliban. The US-Taliban peace deal signed in February has the US on track to pull its last remaining forces out of the country by Spring 2021. The Taliban are currently involved in talks in Doha with the US-backed government.

Several officials “close to the negotiations,” told Fox that Trump’s declaration “may have even jeopardized” the intra-Afghan talks. Unnamed counterterrorism officials even said the tweet might lead to victory for the Taliban, the collapse of the Afghan government, and a “major shot of adrenalin” to the global jihadist movement.

AP News ran a story on Thursday that said the US military was “blindsided” by Trump’s tweet. AP said Pentagon and State Department officials were alarmed by Trump’s comments and feared it would undercut the Afghan peace process. Multiple anonymous officials told AP that they have no knowledge of an earlier deadline for the withdrawal.

Reuters also published a story on Trump’s comments that cited unnamed officials. Three officials said the tweet caught the National Security Council, State Department, and Pentagon by surprise. The officials also said they feared it would reduce the leverage the Afghan government has over the Taliban. “A lot of different scenarios have been discussed, but we weren’t expecting this,” one official said.

AP was the only outlet to speak with a Trump administration official. That official said the president “laid down a marker Wednesday on US troop withdrawals from Afghanistan and since he is the commander in chief, the rest of the administration will follow his lead.”

President Trump reiterated his stance in an interview with Fox Business on Thursday morning. “We’re down to 4,000 troops in Afghanistan. I’ll have them home by the end of the year. They’re coming home, you know, as we speak. Nineteen years is enough. They’re acting as policemen, OK? They’re not acting as troops,” he said.

While the president does seem eager to pull out of Afghanistan, he has been talked out of troop withdrawals before. Like in Syria, where after two failed withdrawals, the president decided to leave a small force to “secure” the oil.

Since the idea of ending the 19-year-old war in Afghanistan is popular, Trump’s declaration was likely an attempt to secure more votes, as the presidential election is quickly approaching.