Time to abandon the disastrous stimulus policies imported from the West 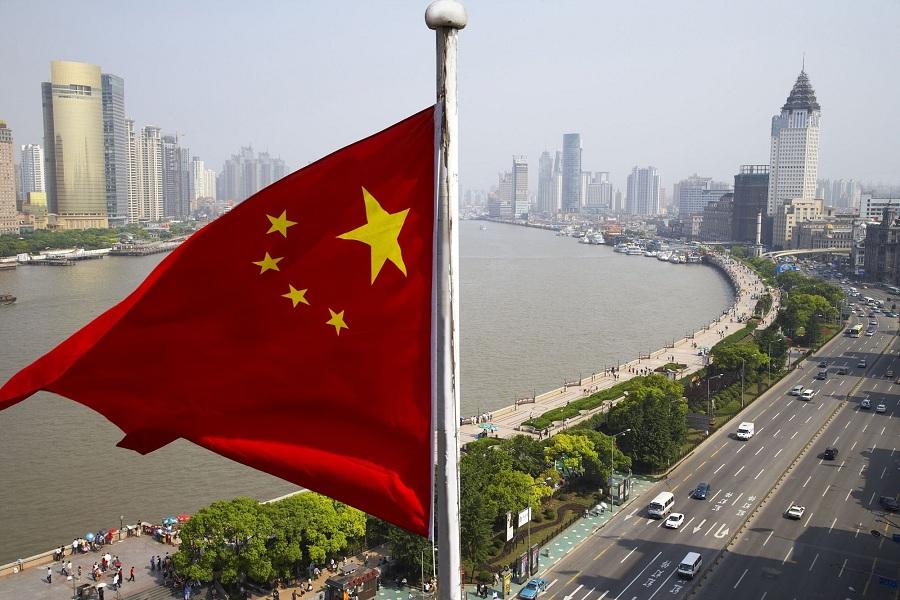 Over the past two decades, fears about China’s rapid economic and technological advancement have grown exponentially and culminated in the recent trade war unleashed by President Trump. But only supporters of government intervention could think of China’s market socialism as a redoubtable challenger to a market-oriented economy. [The question being is the US still signficantly more “market-oriented” than China especially if Warren comes in.]

After very high growth rates at the beginning of its transition to a market economy, China’s economic dynamism waned toward the end of the 1990s. Growth received renewed impetus only when China significantly lowered barriers to foreign trade and investment as a condition to join the WTO in 2001. An export-led economic boom followed, as exports of goods and services surged from around 20% of GDP in the late 1990s to 36% of GDP in 2006. Real GDP growth climbed to 14% y-o-y in 2007 (see graph 1).

Foreign direct investment (FDI) inflows increased four-fold from about USD 40 billion in 2000 to USD 170 billion in 2008. This meant domestic investment, capital accumulation, and productivity took off at impressive growth rates (see graph 2). China truly became a manufacturing workshop for the rest of the world helped by the global economic boom in the early 2000s. 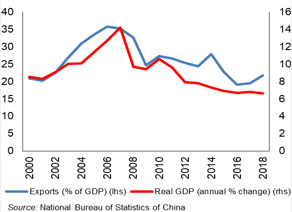 China’s trade liberalization was undermined by mercantilist policies designed to hoard a large amount of forex reserves. In the early 2000s, China ran a currency peg to the US dollar and the People’s Bank of China (PBoC) was obliged to buy or sell foreign currency at a fixed exchange rate.

By purchasing forex inflows from growing FDI and surging exports, the PBC accumulated almost USD 2 trillion in reserves (more than 40% of GDP) until 2008 (see graph 3). Yet, simple exchange operations would not have resulted automatically in such a large accumulation of reserves. The equivalent amount of RMBs sold on the market would have increased the domestic money supply and price level, increasing imports and capital outflows.

In turn, this would have drawn down the forex reserves and rebalanced the current account surplus which peaked at 10% of GDP in 2007 and 2008.

However, PBoC sterilized the increase in the domestic money supply, initially via open market operations — sale of Central Bank Bills and drawing of government deposits — and later by increasing the banks’ reserve requirements from 6% in 2000 to 17.5% in 2008.2 It thus kept the real exchange rate undervalued and the latter depreciated by almost 20% from 2001 to 2004, instead of appreciating under the pressure of hefty financial inflows (see graph 4).

Subsidies to state-owned enterprises boosted exports as well, in particular in sectors such as steel and solar panels. Meanwhile, high tariffs curtailed imports, especially for food and other consumer goods. At the same time, capital controls limited financial outflows and kept the foreign currency in the country.

Mercantilist policies, including currency devaluations, have significant negative consequences, primarily in terms of welfare loss. According to Mises in Human Action “…citizens of the devaluating country are getting less for what they are selling abroad and paying more for what they are buying abroad; concomitantly they must restrict their consumption.” Indeed, private consumption declined markedly from 47% of GDP in 2000 to a rather low level of 36% of GDP in 2008.

In addition, the households’ returns on their high savings were deliberately repressed in the financial sector dominated by state-owned banks and via strict controls of private investment in real estate and overseas.

In addition, China developed a structure of production aligned to an artificially inflated external demand which collapsed when the credit boom stopped in the rest of the world. China’s mercantilist policy and the resulting very high current account surpluses would not have been possible without the monetary expansion of major developed economies.

If imports are curtailed, exports should drop as well, unless foreign buyers are willing to significantly reduce their foreign asset balances. In China’s case, exports were largely purchased with money printed abroad as the Chinese government amassed a large amount of US Treasuries. It was hardly a safe or profitable investment and certainly not worth curtailing private consumption or distorting private investment.

After the Great Recession

When the global recession hit, China doubled down on its interventions. It not only continued piling up forex reserves which grew by another USD 1.9 trillion over 2008-2014, but also engaged in recurrent growth stimuli to prop-up domestic demand as well.

China has implemented growth stimuli approximately every two years since the Great Recession. Each time macroeconomic policies were tightened to reduce domestic imbalances, growth slipped and the Chinese planners resorted to a new round of easing.

Growth stimuli targeted primarily infrastructure and real estate projects, with a large part of the financing provided by local governments, either directly via sales of land and special bonds or, indirectly, via special financial vehicles (LGFVs).

Although China’s annual budget deficit seemed benign at an average of 2.5% of GDP over 2008–2018, the “augmented fiscal deficit” calculated by the IMF, which includes off-budget spending, averaged an astounding 8.5% of GDP.

As monetary expansion increased exponentially, it got out of sync with the one in the US, in particular when the Fed started to normalize interest rates (see graph 6). The RMB appreciated by almost 60% in real terms from 2005 to 2015. After the announcement of a new stimulus round in 2015, hefty capital outflows to the tune of USD 1.3 trillion occurred, as capital controls had been partially relaxed in the meantime. Eventually the PBC spent about USD 830 billion in reserves during 2015–2016 to ease the depreciation of the RMB.

In addition to the balance of payments crisis of 2015–2016, the artificial credit expansion led to a considerable distortion in the allocation of factors of production. More and more resources got perted into financial, real estate and construction activities, whose share in GDP went up significantly to the detriment of manufacturing.

Overbuilding created the so-called “ghost cities” where an estimated 80 million of dwelling units, more than 20% of the total stock, are sitting empty. Such vacancy rates have been seen elsewhere only after the collapse of construction booms, like the one in Spain. In addition, surging mortgage credit inflated housing price bubbles which slumped on several occasions, most recently in 2012 and 2015 (Graph 7).

The monetary expansion pushed up domestic prices and wages with the latter advancing much faster than labor productivity, which had not been the case prior to 2008 (see graphs 7 and 8).

China’s price competitiveness deteriorated visibly and FDI inflows dwindled significantly in recent years (see graph 9). Moreover they were overtaken by FDI outflows since 2016, driven by the so-called Belt and Road Initiative, a new government strategy to persify foreign assets away from US Treasuries.

In addition to being misallocated, investment growth slumped, in particular in manufacturing, slowing labor productivity (see graph 2). Exports declined from 35% of GDP in 2007 to 21% of GDP in 2008 and the current account surplus nearly vanished by 2018 (Graph 10). Real GDP growth rates almost halved from about 10% of GDP in 2010 to 6% in Q3 2019.

When President Trump decided to go against China in 2018, the latter’s economic prowess was already under siege from its own misdirected government interventions.

China’s last two decades of roller-coaster growth, surging domestic debt and malinvestment provide a good example that continuous tampering with the market process is both inefficient and has a snow-ball effect.

The first mercantilist intervention over 2001–2008 led to misallocation of resources in an export-oriented structure of production for which external demand proved illusory. The repressed private consumption and distorted investment resulted in a notable welfare loss.

After 2008, the government intervention continued even more forcefully via recurrent growth stimuli, in an attempt to artificially boost domestic demand as well. Private consumption didn’t benefit much and only grew by about 3% of GDP over 2008-2018 because resources got squandered in infrastructure and real estate malinvestment.

At the same time, price competitiveness, labor productivity and growth took a big hit while indebtedness shot up undermining China’s ambitions to rapidly catch-up with advanced economies. Yet, China’s economy can rise again if it opens up unconditionally to foreign investment and allows markets to allocate resources efficiently. Only private investment in market-oriented production facilities could bring jobs and life to China’s otherwise doomed “ghost cities.”

1. For a detailed typology of government interventions, see Rothbard (Man, Economy and State, Chapter 12 and Power and Market,

2. Increasing bank reserve requirements in order to limit the capacity of fractional-reserve banks to create artificial fiduciary credit and put the banking system on a sounder footing is certainly a worthy policy. However, this was not the purpose of PBoC’s interventions. As a proof, after 2008, PBoC drastically lowered reserve requirements again.