This “Temporary” Inflation Is Turning Into an Inflation Spiral

The last four months on track for 8% yearly 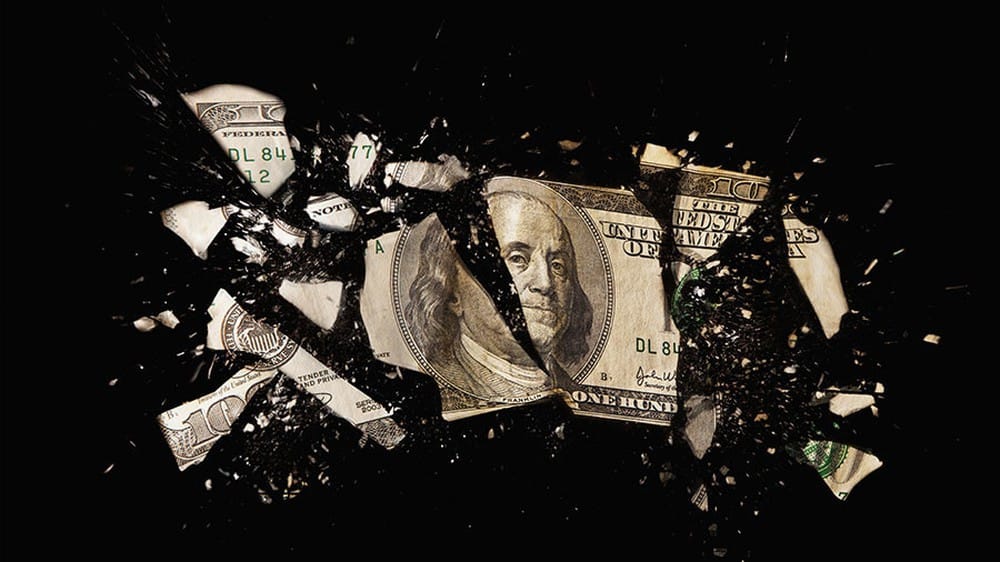 Despite mounting evidence to the contrary, Federal Reserve Chairman Jerome Powell stuck to his “transitory” inflation narrative during testimony House Financial Services Committee. That’s his story and he’s sticking to it!

Just the day before, the consumer price index (CPI) came in hotter than expected – again.  The data has come in higher than expected every month this year. Month on month, the CPI was up 0.9%. The 5.5% year-on-year increase was the biggest monthly jump since 2008. But during his Wednesday trip to Capitol Hill, Powell continued to insist rising prices are transitory.

Powell said inflation “has increased notably and will likely remain elevated in coming months before moderating.” He continued to insist we’re really only seeing significant price pressures from a few sectors such as the auto industry and they will abate.

It’s all kind of the same story. It’s a shortage of semiconductors. There’s also very high demand for various reasons,” Powell said in response to a question from Rep. Madeleine Dean, R-Pa.

“It’s just a perfect storm of high demand and low supply and it should pass. Unless we think there’s gonna be a multi-year, many-year shortage of used cars in the United States, we should look at this as temporary. We very much think that it is.”

More significantly, Powell once again said it’s too early to talk about tightening monetary policy. Although the economy has made progress, the Fed’s benchmark of “substantial further progress” remains “a ways off.”

“Our strong guidance on interest rates and on our balance sheet, will ensure that monetary policy will continue to deliver powerful support to the economy until the recovery is complete,” Powell said.

When asked what he means by “substantial further progress” in employment, Powell equivocated, saying “it’s a very difficult thing to be precise about.” He went on to explain, “It really is a very broad range of things.” But Powell promised the Fed “will provide lots of notice” before it considers tightening policy.

The Fed chair also reassured the committee that if high inflation persisted and was threatening to uproot inflation expectations, “we would absolutely change our policy as appropriate.”

But Powell gave no indication of just how long inflation has to persist before it’s no longer transitory or how high it needs to get before the Fed actually does something. The central bank has indicated it’s comfortable letting inflation run “moderately” above the 2% target for “some time.” Rep. Anthony Gonzalez asked Powell, “How long is ‘some time’?”

The best answer Powell could come up with is “it depends.”

“Right now inflation is well above 2%. … The question for the (Federal Open Market) Committee will be, where does this leave us in six months?”

Yes. That’s the question, Jerome. What is the answer?

It’s important to note that despite all the talk, the Fed isn’t doing anything. Rates remain at zero. Bond buying continues unabated. The extraordinary, inflationary monetary policy is rolling along even as CPI runs hotter and hotter.

Peter Schiff said all of this talk about “transitory” inflation coming from the Fed is nothing but a ruse.

I think it knows that it’s not transitory. It just knows not to admit that because it also knows that it can’t do anything about it.”

Powell will stick to his story as long as he possibly can. He’s really got no choice. He can’t do what it would take to actually fight inflation. It would require interest rate hikes and monetary tightening that would crush whatever economic recovery we’ve had. At this point, the story is all he’s got.

This year, inflation blasted off with a vengeance, and the last four months have seen the hottest pace of inflation since the 1980s.

The consumer price index – the CPI – rose 5% year-over-year for May. The June reading will come out in a couple of days [update: June CPI came in at 5.4%]. 5% of annual inflation is bad enough. But the pace of inflation over the past four months has been much higher, clocking in at over 8% annualized.

Surely, some inflation measures will tick down in the near future, giving everyone false hopes, before rising again. The first bout of inflation always looks temporary. But during those first bouts of inflation, that’s when the triggers of “persistent” inflation – namely the inflationary mindset and inflation expectations – are being unleashed.

So now the Fed keeps repeating time after time that this is temporary and that it will go away on its own because it was caused by temporary factors, namely a demand shock that occurred because the government spread $5 trillion in borrowed stimulus money since March last year; and because the Fed printed $4 trillion over the same period and repressed interest rates to 0%.

This moolah stimulated consumption, in a huge way, and it caused a historic spike in demand for goods, and there are now cascading shortages from ammo to semiconductors, made worse by container shortages and transportation bottlenecks.

But the fiscal and monetary stimuli are still ongoing. The government and the Fed still have the foot fully on the accelerator.

There are all kinds of temporary problems that are causing price spikes here and there. The supply-chain bottlenecks, the difficulties companies have in hiring people, the shortages, the various spikes in commodities, and the price increases in services that have nothing to do with any of the shortages. Contractors and professional services providers are raising their fees, and they can do it suddenly and get away with it and not lose business.

And these price increases are now balling up. Companies are raising prices, companies and consumers are paying those higher prices, and companies are paying higher wages, while the government is stimulating demand with deficit spending, and the Fed is stimulating demand with money printing and 0% interest rates, and no one is resisting the price increases anymore.

And so much cash has been created and handed out that price doesn’t even matter anymore.

People are paying whatever – even for discretionary purchases that they don’t have to buy, such as cars. Most people could easily wait a couple of years instead of buying a car now, but now the whole mindset has changed, and they want to buy now, no matter what the price.

And this change in mindset caused used vehicle prices to surge by over 30%. I’ve never seen anything even close to this, and I’ve been around when inflation ravaged the economy in the late 1970s and early 1980s, until the Volcker Fed finally cracked down on it, triggering a very rough double-dip recession that eventually knocked the wind out of inflation.

So now we have these price spikes cascading from product to product, and from service to service. This surge of inflation is becoming ingrained in the inflation expectations of company decision makers and consumers alike, and they’re adjusting to it, and in this manner inflation becomes persistent.

Even economists are now getting the message. According to a Wall Street Journal poll of those economists, their average forecast for the end of next year in terms of core inflation – which excludes food and energy – has risen to 3.2%.

But wait… They’re using the lowest lowball inflation measure available in the US, namely the “core PCE” inflation measure that the Fed uses as its target and that normally runs far lower than the standard CPI that is cited in the news media.

This was the red-hottest three-month annualized inflation rate since August 1983.

“We’re in a transitional phase right now,” one of those economists told the Wall Street Journal. “We’re transitioning to a higher period of inflation and interest rates than we have had over the last 20 years.”

No kidding. Even economists are coming to grips with it. Just not the Fed, at least not publicly.

So it’s dawning on economists that the overall inflationary environment isn’t transitory, but persistent, though some factors that have triggered the unleashing of the inflationary cascade are transitory. And this higher inflation is a generational change.

People who became adults in the 1990s or later have never experienced this kind of inflation. They don’t know what it’s like when prices jump, one item here, then the next day another item or service there.

For some people, pay increases make up for inflation, and that includes pay increases based on performance and productivity that were supposed to make you be able to buy more goods and services, but you need every penny of that performance raise just to maintain your standard of living.

And for other people, pay doesn’t rise enough to compensate for inflation, and they have to cut back their standard of living.

There is now a lot of clamoring among economists and Wall Streeters that the Fed will wait too long, fall too far behind the curve, keep stimulating for too long despite rampant inflation, and thereby trigger an inflation spiral that would be hard to bring under control, and that these belated efforts to bring inflation under control when it’s totally out of control would wreck the economy and asset prices.

They’re not worried about hyperinflation. They’re worried about 5%, 7%, 10% inflation for years. That kind of inflation would blow all kinds of assumptions out of the water. No one is ready for this.

Long-term interest rates will either surge to meet and transcend those inflation levels, if markets are allowed to react to inflation; or the Fed represses long-term interest rates by buying assets, and that will further heat up inflation, and investors like pension funds and insurers that invest in bonds, will see the purchasing power of their investments get wiped out, when they earn 2% for years in an 8% inflation environment.

More likely is that markets will eventually be allowed to react to inflation to some extent, which will cause a rise in interest rates, which is the way to tamp down on inflation, but which will make it much harder for junk-rated companies to borrow, triggering waves of defaults. Defaults and higher borrowing costs would hit stock prices.

And consumers, my gosh, even those whose incomes keep up with inflation. When inflation is persistent at 5% or 8%, and markets are allowed to react, then mortgage rates rise to meet or exceed those inflation levels. With the sky-high home prices right now, those higher rates would move house payments totally out of range for potential buyers, and demand dries up.

For the market to unfreeze, home prices would have to come down to bring those mortgage payments back into reach. There is a whole generation of home buyers and home sellers and real estate professionals and loan officers and mortgage brokers out there that have never experienced anything like this.

This move to higher inflation can be very disruptive to the economy, to planning by households and businesses, and to spending patterns.

This persistent inflation is what is being triggered right now by the fiscal and monetary stimulus and by the temporary inflation spikes. And the Fed, by putting that issue officially on “ignore,” is making it far worse.

3 Comments
Leave A Reply
Cancel Reply
Telegram Group
AE has a supporting readers Telegram group where we hang out and exchange leads and takes. If you have ever donated to AE drop me a line on email and I'll send you the link to join.
Anti-Bellum
Antiwar.com
Brownstone Institute
Edward Slavsquat
Fourth World
Swiss Policy Research
The New Kremlin Stooge
Read the rules before you think about leaving a message
Anti-Empire