Unfilled job openings have been spiking from record to record, and in July spiked to a new record. And the number of people who quit a job remained in record territory, as companies tried to fill jobs by offering higher wages and signing bonuses and ended up hiring already employed workers away from other companies.

This data is not based on job ads, but a survey 21,000 nonfarm business establishments and government entities by the Census Bureau, similar to the monthly jobs report: 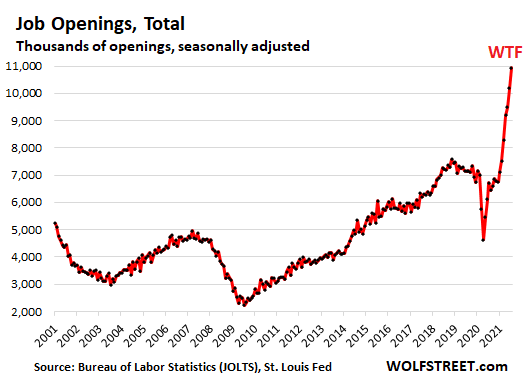 These 11.7 million job openings are occurring amid sharply higher wages, even as 8.4 million people are deemed to be “unemployed,” according to the monthly jobs report released on Friday, and even as 12.2 million people claimed some form of unemployment compensation.

This is the conundrum of the most distorted labor market ever that is often summarized by the expression of “labor shortage,” as employers see strong demand for their products and services but have trouble hiring, though there is no shortage of people who could work.

But people, for whatever reason, cannot find work they would accept under the conditions offered, or they are still not looking for work, or will never look for work again since they have decided to retire.

Employers reported that their payrolls, at 146.8 million workers, were still down by 5.3 million from February 2020 (green line in the chart below), and households reported that the number of people working, including the self-employed, at 153.2 million, was still down by 5.6 million from February 2020 (red line), according to the BLS jobs report on Friday:

The aggressive efforts to fill open positions with qualified staff by offering higher wages and signing bonuses and better benefits have the effect that employers are hiring people who already have a job. To get those higher wages and the hiring bonus, they quit their old job.

For employees, this is a moment of finally feeling the pricing power of labor. For employers whose employees were poached, this creates new job openings and new headaches.

So the “quits” hit a record in April of nearly 4 million, and in July were back at the record of nearly 4 million people who quit their jobs. This shows how difficult the labor market is for employers in hiring and retaining staff.

A large growing number of quits is the signature of a strong competitive labor market that gives workers leeway to switch jobs and sends employers scrambling to hire and retain staff: 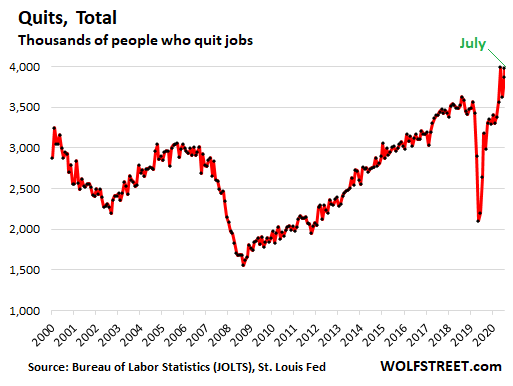 Education and Health Services: The number of unfilled job openings spiked by a record of 281,000 openings to a record 2.0 million (seasonally adjusted), up 49% from July 2019, as educational institutions reopened and struggled mightily to hire. 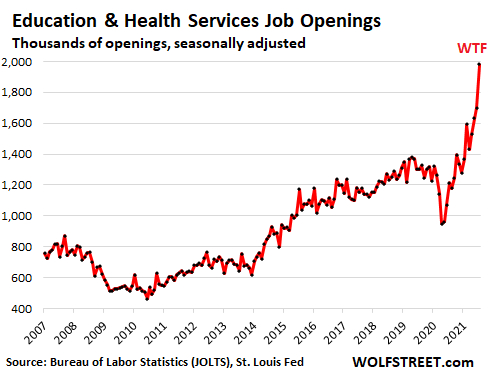 Professional and Business Services: Unfilled job openings have been spiking from record to record and in July hit 1.81 million (seasonally adjusted), up 47% from July 2019: 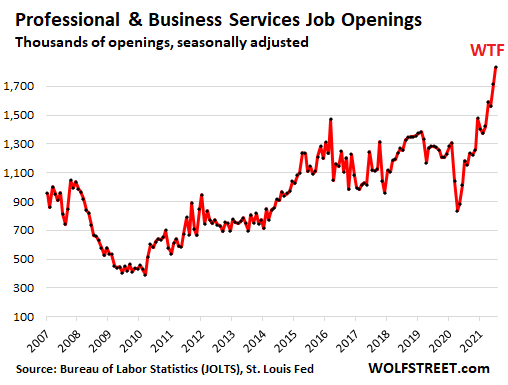 Leisure and hospitality: Unfilled job openings at restaurants, bars, hotels, casinos, etc. has also spiked from record to record and hit 1.82 million in July (seasonally adjusted), up 83% from July 2019: 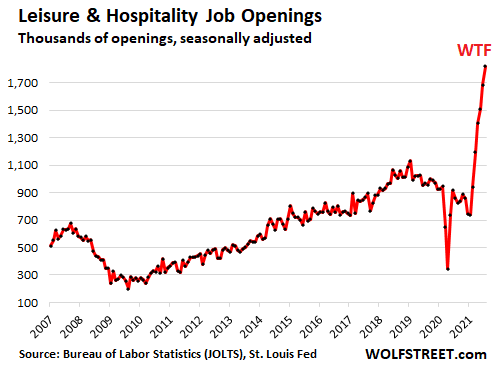 These 1.82 million unfilled job openings in Leisure and Hospitality show just how tough it is for employers in the sector to fill their open jobs, which are mostly lower-wage jobs and exposed to the public and the risks that come along with it. 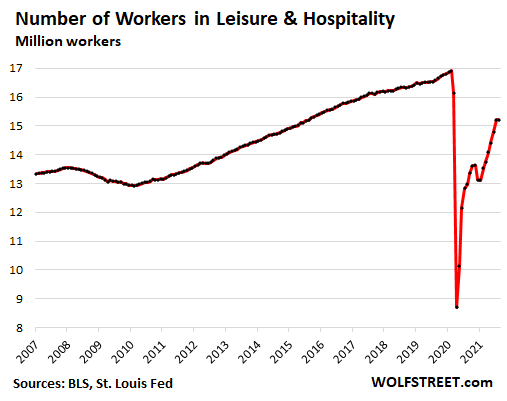 Healthcare and Social Assistance: Job openings spiked by a record of 294,000 openings to a record 1.79 million in July, up by 48% from July 2019, amid reports that the dramatic surge in Covid hospitalizations has left many hospitals understaffed and added to the existing hiring woes: 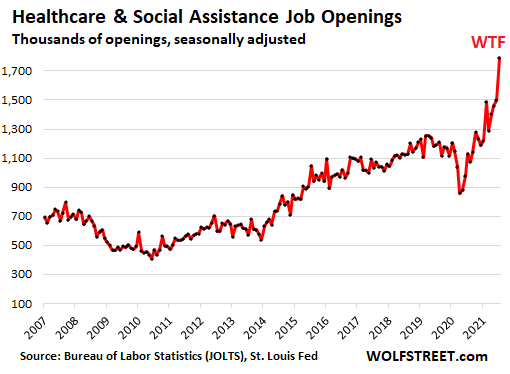 Retail Trade: This includes auto dealers, grocery stores, general merchandise operations, mall stores, and all sorts of other retailers. Job openings fell after the record spike that had culminated in June, to 1.1 million, still up by 35% from July 2019: 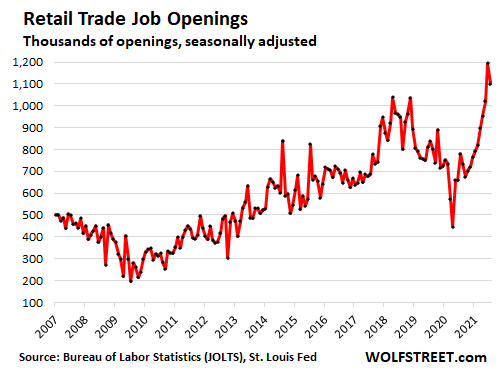 State and Local Governments: Job openings spiked by 96,000 to a record of 936,000 openings in July, up by 58% from July 2019. This does not include the federal government, whose job openings have remained in the normal range throughout the pandemic, except for the spike around the census: 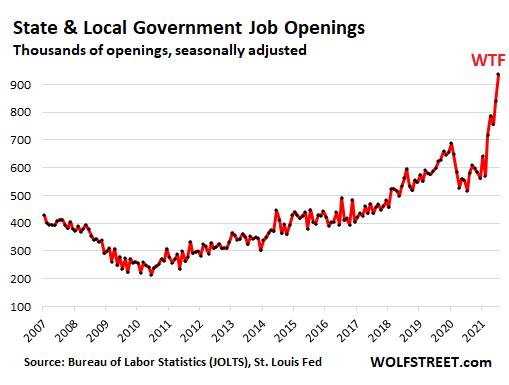 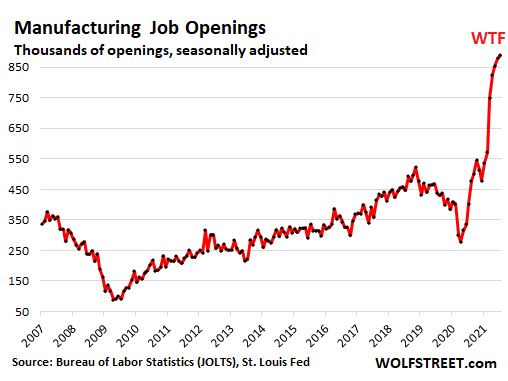 But employment in manufacturing, at 12.4 million jobs, was still down by 378,000 workers from February 2020 even as over-heated demand for goods sent companies scrambling to hire qualified people: 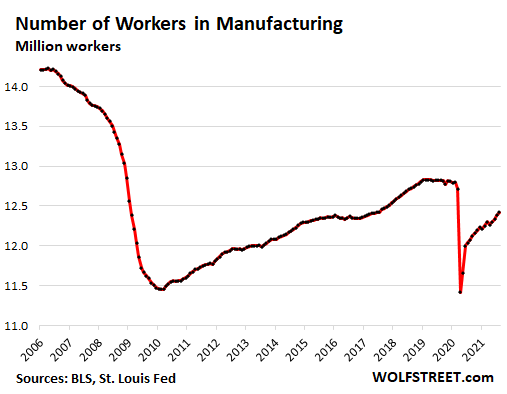 And manufacturing production in July hit the highest level since February 2019, despite much lower employment and the large numbers of job openings, a sign of increased automation and higher productivity: 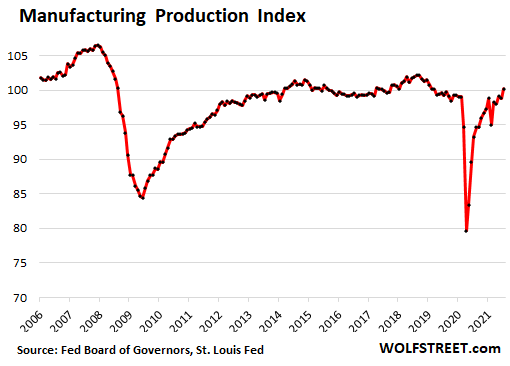 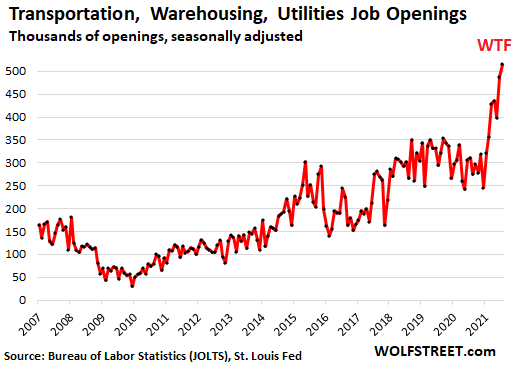 Construction: Job openings ticked down to 321,000 in July, about flat with July 2019, but still at the high end of the range beyond the one-off-miracle in April 2019: 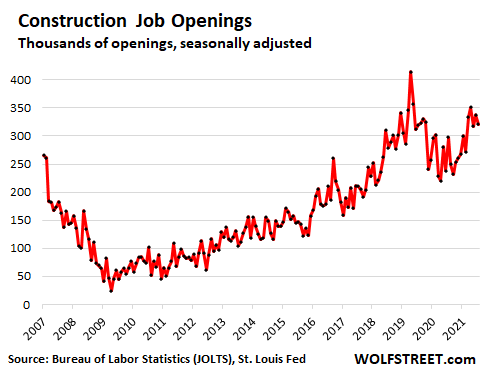 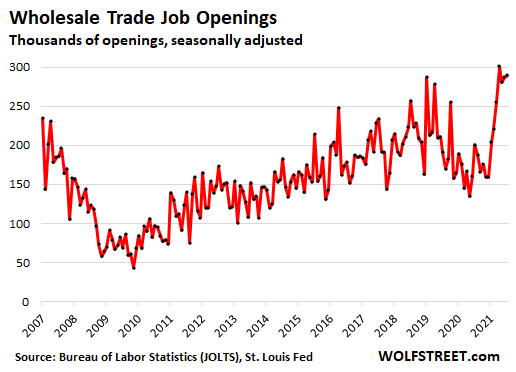 Arts, Entertainment, and Recreation: Job openings jumped to 235,000, double from July 2019, but down a tad from the April spike: 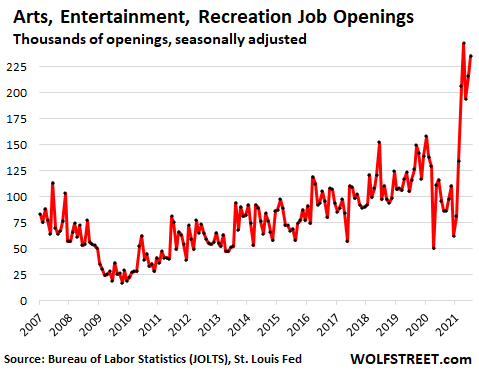