There Has Been a Series of Ukrainian Combat Refusals

Abandoned by officers, torn to shreds by artillery... 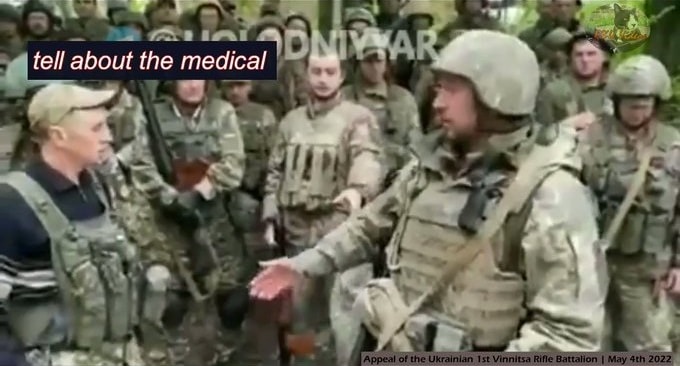 The men are mainly reservists called up after February 24, but there are also contract soldiers among them.

The 79th is fighting in Donbass along the Severodonetsk river to the east of Izyum. This sector has been one of the most active ones recently. It seems the 79th has been mauled heavily, but the unit remains in the field and has also inflicted casualties itself. (Eg 1, 2, 3, 4, 5.)

There has also been at least one instance of a unit from the Territorial Defense, the 101st from Transcarpathia, refusing to transfer to Donbass.

They complain that they have not been properly equipped and trained for the job. And that transfer to Donbass wasn’t part of the deal when they signed up — originally territorial militias were guaranteed they would not be transferred out of their regions.

It is truly a shame that there has been such a self-imposed conspiracy of silence on the state of the Ukrainian military by Western reporters and commentators that prevents us from knowing more. Doubtlessly the Ukrainian military is suffering severe blows and is struggling to cope with a variety of problems, including unskilled or cowardly command and morale problems. Nonetheless it remains in the field, it continues to offer resistance, and it continues to make Russia’s aims very, very difficult.

Also I think that these types of videos are part of the reason why Putin is so resistant to partial mobilization or even just using conscripts even though the Russian war effort so clearly cries out for more infantry. When things go awry battle formations composed solely of contract soldiers aren’t going to go public and start making protest videos, but reservists and conscripts very well might.

Using reservists and conscripts is messy in more ways than one. It entails a lot more bartering, persuasion and collaboration with the people you are nominally ordering around. I think that Putin isn’t quite yet ready to have to be bartering with the society and the soldiers in this way, and his system perhaps isn’t capable of it. (Not that Ukrainian system is any better but they simply have no choice but to mobilize anyway.)

Anyway back to the combat refusal videos. They’re all worth a watch. Very grim and revealing stuff. Brave men in more ways than one.

Ever seen a soldier at the front lines that don't know how to use a gun? Now you have 😉 pic.twitter.com/7QBYUISd1a