The Guardian reports that London’s emergency room chiefs estimate that about 85 more people day each day from heart attacks than was the case before the medical martial law:

The A&E chiefs’ minutes said that on the weekend of 4-5 April the number of 999 calls in which someone had had a cardiac arrest rose from 55 a day in normal times to 140. Most of the people concerned died, doctors said.

The minutes also reveal acute concern among senior medics that seriously ill patients are not going to A&E or dialling 999 because they are afraid or do not wish to be a burden.

“People don’t want to go near hospital,” the document said. “As a result salvageable conditions are not being treated.”

These are entirely preventable deaths. These people would have been saved had they not been so terrified of contracting the supposed Covid-19 plague in hospital that they did seek help, or only after it was already too late.

85 avoidable heart attack deaths daily means just under 600 such deaths each week in London alone. With its 10 million population London represents roughly one-sixth of UK’s population, so nationally that would be 3600 needless, avoidable, excess heart attack deaths due to lockdown-fueled psychosis and the fear of the “invisible enemy” lurking in the hospitals. Or somewhat less (say 3000) if we assume that outside London, where there is less Covid-19, heart condition sufferers are less afraid of calling an ambulance.

An earlier report similarly indicated that in the 5-million Scotland there were up to 500 excess weekly deaths which could not be attributed to Covid-19.

It is interesting that The Guardian is reporting this at all, but their motivation seems to be to pave the way to include these deaths into the Covid-19 tally:

A&E doctors believe that many of the extra deaths from cardiac arrest are due to Covid-19 which, by making it difficult for someone to breathe, puts serious strain on their heart. “Of these 85 extra cardiac arrest deaths a day in London, they must be mainly Covid,” said the head of one A&E department. 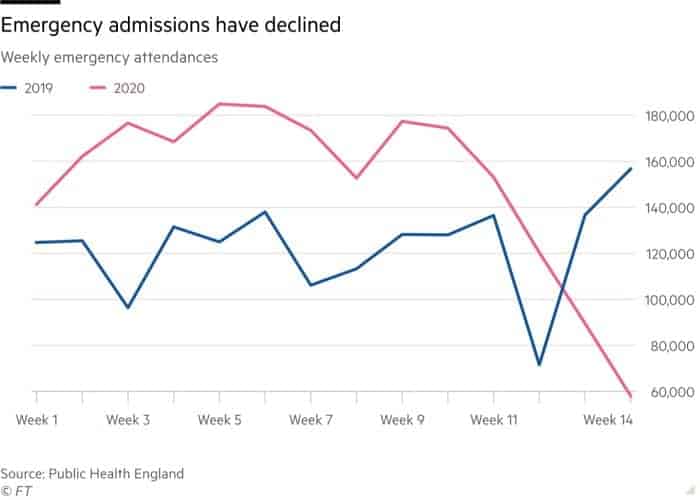 In other words, there is clear evidence that heart condition patients are seeking help at well below normal rates. If instead of up to 500 people just up to 250 are seeking help daily then obviously a lot more people are going to be dying simply on the account of that. This would already would result in a great many extra deaths, before you introduce any additional speculative factors. So where in one case the relationship would be clearcut and direct the supposed connection to Covid-19 infection is entirely speculative.

This also makes sense just logically. Why would someone who was already infected be afraid of going to a hospital? If you’re already infected then what’s the downside?  To the contrary, by now it has been drilled into everyone’s head that severe Covid-19 cases need hospital oxygen and ventilators. Anyone who thought they had severe Covid-19 would instead rush to a hospital to occupy an ICU bed before they supposedly run out.

Sure enough, a person could be infected with the SARS-CoV-2 virus but not know it. But if they haven’t even developed the disease then how much of a strain on their system would the virus represent really?

Most of the Covid-positive deaths are frail people with serious preconditions dying very close, or even at their normal life expectancy. Meanwhile, a chunk of heart attack deaths could be people in their 40s, 50s, and 60s who — had they not been infected with a sudden fear of seeking help at facilities of modern medicine — would have had many more years to look to.

So while both are tragedies the 3000 excess heart attack deaths is the bigger tragedy of the two by far, and made even more so by the fact that unlike the Covid-positive deaths it is entirely man-made.

But that’s not even the whole story, BBC reports that the total number of weekly excess deaths in the UK on a year-to-year basis is 8000 with only a third of those “linked to coronavirus”:

The Office for National Statistics said there were 18,500 deaths in the week up to 10 April – about 8,000 more than is normal at this time of year.

A third were linked to coronavirus, but deaths from other causes also increased, suggesting the lockdown may be having an indirect impact on health.

So then the 3000 avoidable heart attacks deaths is only one part of the story. The full toll of the lockdown is closer to 5000 (two-thirds of 8000) excess deaths each week.

And indeed, the excess death toll in non-lockdown Sweden has been correspondingly smaller even as Sweden’s Covid-outbreak is as severe as the one in Britain on a per capita basis:

The absurdity and the tragedy of it at all is even greater when you consider that there is no evidence that the lockdown is doing anything helpful that will keep the final Covid-positive tally any lower than would otherwise be the case. Sweden certainly isn’t doing any worse than Britain on the Covid front but has been spared a British-style flood of perfectly avoidable heart attack deaths, and is also further along on the road to herd immunity, and will be able to turn it back on the whole thing quicker.

So the full situation that we have is that because of a virus that may, or may not, be contributing to up to 5000 weekly deaths close to when they would have occurred anyway and of which perhaps only one half are true excess deaths (one-third of 8000) if that, a lockdown was introduced that does nothing to reduce the former number, but which is causing 5000 weekly deaths that absolutely are excess deaths, and all so we can stretch out this nightmare even further as we postpone healthy people who are not at risk building a natural shield that can protect those who are.

Lockdowns aren’t even killing more people than they are saving. They literally have nothing but a trifold downside in avoidable deaths, in postponed herd immunity and in economic damage which is going to take a bite out of general health levels and life expectancy for many years down the road in a million incalculable ways.