The Year the Ruling Class Got Woke 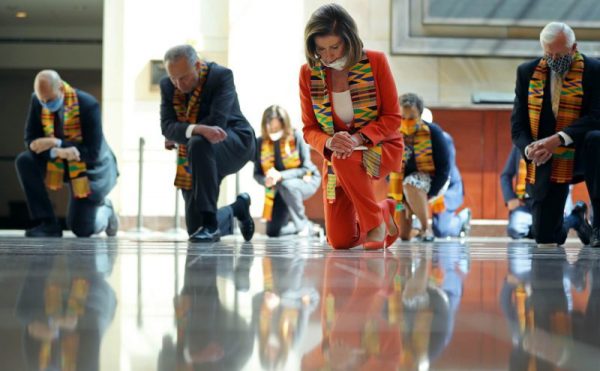 For me, the defining image of 2020 was also the funniest: that of Democratic lawmakers in the US taking the knee, in solidarity with the Black Lives Matter movement, draped in Ghanaian kente cloth.

Watching thoroughly establishment politicians, House speaker Nancy Pelosi and Senate minority leader Chuck Schumer to the fore, literally kneeling before the new woke politics was striking. It provoked so many questions, not least if Pelosi and Schumer (80 and 70 respectively) would be able to rise again unassisted.

But this absurd attempt at virtue-signalling – which provoked mockery rather than plaudits, even among those it was meant to impress – made one thing clear: that wokeness is the new orthodoxy, and the old elites know this.

The rise of campus censorship and student intolerance is in many respects an off-shoot of this ideology, which holds that words wound and that free speech and reason are just covers for white domination – and which seems to generate Salem-like hysteria among its adherents.

The Evergreen State College controversy of 2017 – in which progressive professor Bret Weinstein was hounded off campus by student protesters for merely criticising the tactics of an anti-racist protest – showed how total the takeover was in some higher-education institutions.

The viciousness of Weinstein’s student detractors – some of whom took to patrolling campus with baseball bats – was striking. But more striking was the capitulation of college leaders, who subjected themselves to neo-Maoist struggle sessions, in which they were mocked and hectored by the students.

That same energy exploded on to America’s streets this summer, sparking the nation’s biggest riots for 50 years. Righteous anger at the brutal police killing of George Floyd in Minneapolis morphed into nihilistic violence and the destruction of minority neighbourhoods and businesses, with out-of-town white agitators often leading the charge.

And just as happened at Evergreen, the alleged adults in the room basically gave in. Democratic leaders refused to condemn, or often even mention, the riots. CNN reported on ‘mostly peaceful protests’ in Kenosha, while its own reporter appeared on screen with a gas mask hanging around his neck in front of a wall of flames.

The media, in part, wrote the script for all this. In 2019, the New York Times launched its ‘1619 Project’, which aimed to repose the arrival of the slaves as the true birth of America. This kind of self-hating, historically illiterate perspective was the thread connecting much of the carnage and commentary in 2020. 1619 was even spraypainted on several toppled statues.

But this year, wokeness consumed establishment media even more than before. In June, the Times fired its opinion editor after he published an op-ed by a Republican senator, calling for troops to be brought in to quell the riots. Times staff claimed the article was in itself a threat to black lives, and the suits gave in.

What was perhaps more unexpected was the almost total embrace of Black Lives Matter, the banner under which this movement marched, by the capitalist class. Corporate giants lent their support to the protests. Ben & Jerry’s ice cream pledged to ‘dismantle white supremacy’. And the CEO of JPMorgan Chase took the knee in front of a giant open bank vault.

For all the protesters’ radical pretensions, the woke movement has been easily co-opted by the most rich and powerful in society.

This is because identity politics is in many ways more spiritual than material. Heretics must be ousted. Blasphemies must be scrubbed. Past sins must be ‘come to terms with’, in some vague, undefined sense.

None of this threatens the rich and powerful.

Indeed, it is much cheaper for businesses to pay people like Robin DiAngelo – the millionaire diversity consultant and author of the bestselling White Fragility – to lecture staff about their alleged racism than it is to offer them better pay and working conditions.

Wokeness is not some capitalist plot to divide up the working class, leaving people of similar economic interests bickering among one another about their relative privilege. But that certainly is the effect of it. And that suits the bosses just fine.

More than that, wokeness offers the elites who embrace it a false sense of moral authority – a way to salve their consciences and to appear progressive without giving anything up themselves. In politics, in the form of people like vice-president-elect Kamala Harris, it provides a progressive gloss to what is, in effect, the same old establishment, neoliberal agenda.

Whether or not the elite’s embrace of wokeness is entirely sincere remains up for debate. But in a sense that doesn’t matter so much. Identity politics has become the new official religion, something which sets the moral framework, and which must be deferred to regardless of whether or not one believes every word of scripture.

If what these people were genuflecting to was actually anti-racism that would be no bad thing. But it isn’t. Wokeness, in its insistence that black and white people live cosmically different lives, in its pessimistic conviction that little has changed or could ever change, actually reifies racial difference and racial tension.

The consequences of that worldview getting the elite seal of approval could be disastrous. But there is hope. The support among blue-collar workers for the decidedly anti-woke Donald Trump at the November election, and the surge in support for him among black people and Latinos, reveals a bristling against this new orthodoxy among the very people it is supposed to appeal to.

In 2020, wokeness in effect became the new religion of the ruling class. In 2021, we need more heretics.