"To the end, true believers never renounced their faith. They simply starved to death, blaming the failure of the prophecy on the doubts of non-believers"

This week-end we were all hoping to hear about a lifting of restrictions and a view of a rapid road back to normality.  I know I am not alone in being seriously alarmed by the direction of travel that is the opposite to what was wanted.  We were initially locked-down in March to ensure the ‘NHS wasn’t overwhelmed’.  Then in April it was extended to ‘save lives’ and this has now morphed into a rationale to ‘prevent a second wave’. This weekend we were to hear about reduced restrictions, but instead of release, we hear about how we will all be required to do a lot more walking and cycling, as public transport will effectively be unusable, due to social distancing requirements, for the foreseeable future. We hear about how all air travel arrivals in the UK will now be required to quarantine for two weeks, with no description of how this will ever be ended. That’s the end of the travel and tourism sector. Gone. Just like that. And encompassing everything are the recent words of the Prime Minister that “we need to continue to make sure we don’t squander the efforts we have already made”. Continue to what? To where?

We are told the strategy is the suppression and (through testing, tracking, tracing and isolation) the eradication of a virus that is, to put it bluntly, not eradicable.  As infections and deaths fall and the economic pain of our existing restrictions begin to bite, we aspire to release, but the final success of that strategy will require more isolation and distancing, not less. In a world where the virus is here and here to stay, this is the road to economic ruination, because the only way to attempt this ultimately unachievable goal will be forever increased restrictions and loss of freedoms. It can be very difficult to get out of a ‘throwing good money after bad’  black hole. But that is scary place we are now at.

The description  below is the story of the death of the Xhosa nation between 1856 and 1858. It is not a perfect parallel, but there are some chilling similarities to where we find ourselves in the UK: the ‘vision’ (or model prediction), the personal sacrifices of the leader, unrealistic or unachievable goals, the changing dates, a ruined economy and impoverishment and starvation, the doubling down on efforts, etc. If nothing else it is a piece of history worth knowing and I hope an enjoyable read.

In the early nineteenth century, the British colonized Southeast Africa. The native Xhosa resisted, but suffered repeated and humiliating defeats at the hands of British military forces. The Xhosa lost their independence and their native land became an English colony. The British adopted a policy of westernising the Xhosa. They were to be converted to Christianity, and their native culture and religion was to be wiped out. Under the stress of being confronted by a superior and irresistible technology, the Xhosa developed feelings of inadequacy and inferiority. In this climate, a prophet appeared.

In April of 1856, a fifteen-year-old girl named Nongqawuse heard a voice telling her that the Xhosa must kill all their cattle, stop cultivating their fields, and destroy their stores of grain and food. The voice insisted that the Xhosa must also get rid of their hoes, cooking pots, and every utensil necessary for the maintenance of life. Once these things were accomplished, a new day would magically dawn. Everything necessary for life would spring spontaneously from the earth. The dead would be resurrected. The blind would see and the old would have their youth restored. New food and livestock would appear in abundance, spontaneously sprouting from the earth. The British would be swept into the sea, and the Xhosa would be restored to their former glory. What was promised was nothing less than the establishment of paradise on earth.

Nongqawuse told this story to her guardian and uncle, Mhlakaza. At first, the uncle was sceptical. But he became a believer after accompanying his niece to the spot where she heard the voices. Although Mhlakaza heard nothing, he became convinced that Nongqawuse was hearing the voice of her dead father, and that the instructions must be obeyed. Mhlakaza became the chief prophet and leader of the cattle-killing movement. 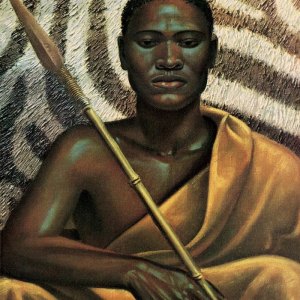 News of the prophecy spread rapidly, and within a few weeks the Xhosa king, Sarhili, became a convert. He ordered the Xhosa to slaughter their cattle and, in a symbolic act, killed his favourite ox. As the hysteria widened, other Xhosa began to have visions. Some saw shadows of the resurrected dead arising from the sea, standing in rushes on the river bank, or even floating in the air. Everywhere that people looked, they found evidence to support what they desperately wanted to be true.

The believers began their work in earnest. Vast amounts of grain were taken out of storage and scattered on the ground to rot. Cattle were killed so quickly and on such an immense scale that vultures could not entirely devour the rotting flesh. The ultimate number of cattle that the Xhosa slaughtered was 400,000. After killing their livestock, the Xhosa built new, larger kraals to hold the marvellous new beasts that they anticipated would rise out of the earth. The impetus of the movement became irresistible.

The resurrection of the dead was predicted to occur on the full moon of June, 1856. Nothing happened. The chief prophet of the cattle-killing movement, Mhlakaza, moved the date to the full moon of August. But again the prophecy was not fulfilled.

The cattle-killing movement now began to enter a final, deadly phase, which its own internal logic dictated as inevitable. The failure of the prophecies was blamed on the fact that the cattle-killing had not been completed. Most believers had retained a few cattle, chiefly consisting of milk cows that provided an immediate and continuous food supply. Worse yet, there was a minority community of sceptical non-believers who refused to kill their livestock.

The fall planting season came and went. Believers threw their spades into the rivers and did not sow a single seed in the ground. By December of 1856, the Xhosa began to feel the pangs of hunger. They scoured the fields and woods for berries and roots, and attempted to eat bark stripped from trees. Mhlakaza set a new date of December 11 for the fulfilment of the prophecy. When the anticipated event did not occur, unbelievers were blamed.

The resurrection was rescheduled yet again for February 16, 1857, but the believers were again disappointed. Even this late, the average believer still had three or four head of livestock alive. The repeated failure of the prophecies could only mean that the Xhosa had failed to fulfil the necessary requirement of killing every last head of cattle. Now, they finally began to complete the killing process. Not only cattle were slaughtered, but also chickens and goats. Any viable means of sustenance had to be destroyed. Any cattle that might have escaped earlier killing were now slaughtered for food.

Serious famine began in late spring of 1857. All the food was gone. The starving population broke into stables and ate horse food. They gathered bones that had lay bleaching in the sun for years and tried to make soup. They ate grass. Maddened by hunger, some resorted to cannibalism. Weakened by starvation, family members often had to lay and watch dogs devour the corpses of their spouses and children. Those who did not die directly from hunger fell prey to disease. To the end, true believers never renounced their faith. They simply starved to death, blaming the failure of the prophecy on the doubts of non-believers.

By the end of 1858, the Xhosa population had dropped from 105,000 to 26,000. Forty to fifty-thousand people starved to death, and the rest migrated. With Xhosa civilization destroyed, the land was cleared for white settlement. The British found that those Xhosa who survived proved to be docile and useful servants. What the British Empire had been unable to accomplish in more than fifty years of aggressive colonialism, the Xhosa did to themselves in less than two years.