The World Has Lost a Peacemaker 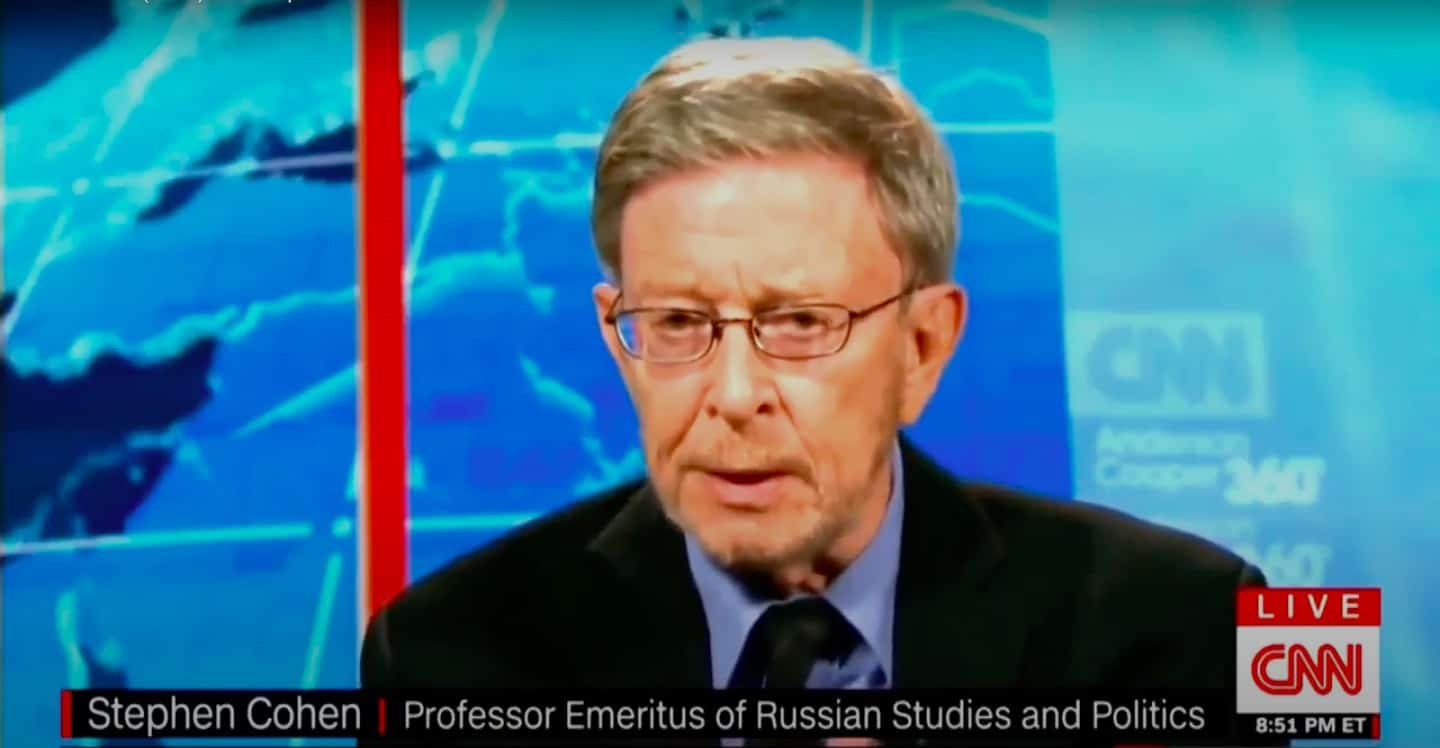 It is with immense sadness that I have to report that Stephen F. Cohen passed away yesterday in his home in Manhattan at the age of 81.

There are a few media outlets who have already reported this.  Most of them discuss Stephen F. Cohen’s political ideas and his books, which is normal since he was a historian of the Soviet Union.  But I won’t do that here.

What I want to say about Cohen is something very different.

First, he was a man of immense kindness and humility.  Second, he was a man of total intellectual honesty.  I can’t say that Cohen and I had the same ideas or the same reading of history, though in many cases we did, but here is what I found so beautiful in this man: unlike most of his contemporaries, Cohen was not an ideologue, he did not expect everybody to agree with him, and he himself did not vet people for ideological purity before offering them his friendship.

Even though it is impossible to squeeze a man of such immense intellect and honesty into any one single ideological category, I would say that Stephen Cohen was a REAL liberal, in the original, and noble, meaning of this word.

I also have to mention Stephen Cohen’s immense courage.  Yes, I know, Cohen was not deported to GITMO for his ideas, he was not tortured in a CIA secret prison, and he was not rendered to some Third Word country to be tortured there on behalf of the USA.  Stephen Cohen had a different kind of courage: the courage to remain true to himself and his ideals even when the world literally covered him in slanderous accusations, the courage to NOT follow his fellow liberals when they turned PSEUDO-liberals and betrayed everything true liberalism stands for.  Professor Cohen also completely rejected any forms of tribalism or nationalism, which often made him the target of vicious hatred and slander, especially from his fellow US Jews (he was accused of being, what else, a Putin agent).

Cohen had the courage to take on the entire ruling elites of this country and their messianic supremacist ideology by himself, almost completely alone.

Last, but most certainly not least, Stephen Cohen was a true peacemaker, in the sense of the words of the Holy Gospel I quoted above.  He opposed the warmongering nutcases during the Cold War, and he opposed them again when they replaced their rabid hatred of the Soviet Union with an even more rabid hatred of everything Russian.

I won’t claim here that I always agreed with Cohen’s ideas or his reading of history, and I am quite sure that he would not agree with much of what I wrote. But one thing Cohen and I definitely did agree on: the absolute, number one, priority of not allowing a war to happen between the USA and Russia.  It would not be an exaggeration to say that Stephen Cohen dedicated his entire life towards this goal.

If the Nobel Peace Prize meant anything, and if it was at least halfway credible, I would say that Stephen Cohen deserved such a Nobel more than anybody else on this planet.  Instead, he will get his reward in the Heavens.

In Russian we have an Old Testament inspired saying: “город стоит, пока в нем есть хоть один праведник” roughly meaning “a city will stand as long as there remains even one righteous person inside“.  I can’t help it but feel that the “city” of the United States has just lost such a righteous person.  Yes, there are still a few righteous people left in this “city”, but we all sure lost one of our best contemporaries.

To my immense regret, I never met Professor Cohen personally.  And yet, when I heard the news of this death this morning, I felt truly heartbroken.  My main consolation is that Cohen died before November and what will inevitably follow.  I believe that God took him away from us to spare him the pain of seeing his country collapse under the repeated attacks of pseudo-liberal neocons.

It is pretty obvious that in our crazy and ugly times, Professor Cohen will not get the recognition and gratitude at home he so much deserves (if only because US pseudo liberals are much too busy bawling about Justice Ginsburg’s death).  And while Stephen Cohen is well-known in some Russian circles (he had many friends in Russia), he is hardly a household name for most Russian people.  But I am confident that, assuming humanity survives a little longer, Professor Cohen will be recognized as the righteous person he was, both in the USA and in Russia.

Somewhere, I also believe that we, as a society, simply don’t deserve to have such a righteous man amongst us.  Cohen is now in much better company.

Thank you, dear Steve, for your kindness and courage.  I shall miss you very, very much!