The War on Populism Is Building Toward an Exciting Climax: Color Revolution

“After America is taken over by a Russian-backed Hitlerian dictator, the forces of democracy unite to depose the tyrant and save the free world” 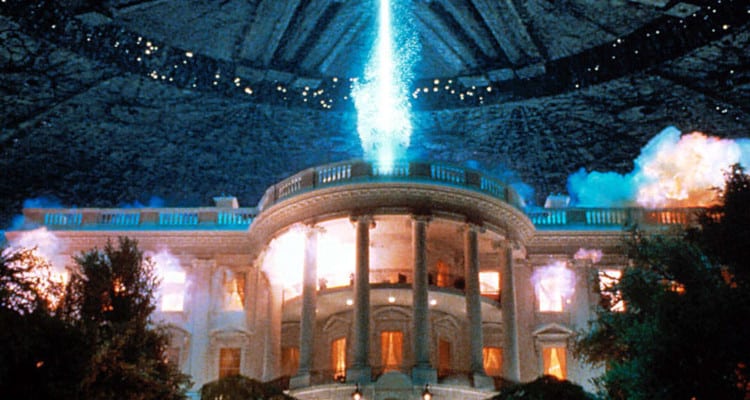 So, it appears the War on Populism is building toward an exciting climax. All the proper pieces are in place for a Class-A GloboCap color revolution, and maybe even civil war. You got your unauthorized Putin-Nazi president, your imaginary apocalyptic pandemic, your violent identitarian civil unrest, your heavily-armed politically-polarized populace, your ominous rumblings from military quarters … you couldn’t really ask for much more.

OK, the plot is pretty obvious by now (as it is in all big-budget action spectacles, which is essentially what color revolutions are), but that won’t spoil our viewing experience. The fun isn’t in guessing what is going to happen. Everybody knows what’s going to happen. The fun is in watching Bruce, or Sigourney, or “the moderate rebels,” or the GloboCap “Resistance,” take down the monster, or the terrorists, or Hitler, and save the world, or democracy, or whatever.

GloboCap is talking to you … are you listening? pic.twitter.com/ARuYnyyJXI

The show-runners at GloboCap understand this, and they are sticking to the classic Act III formula (i.e., the one they teach in all those scriptwriting seminars, which, full disclosure, I teach a few of those). They’ve been running the War on Populism by the numbers since the very beginning. I’m going to break that down in just a moment, act by act, plot point by plot point, but, first, let’s quickly cover the basics.

The first thing every big Hollywood action picture (or GloboCap color revolution) needs is a solid logline to build the plot around. The logline shows us: (1) our protagonist, (2) what our protagonist is trying to do, and (3) our antagonist or antagonistic force.

For example, here’s one everyone will recognize:

“A computer hacker learns from mysterious rebels about the true nature of his reality and his role in the war against its controllers.”

In our case, the logline writes itself:

“After America is taken over by a Russian-backed Hitlerian dictator, the forces of democracy unite to depose the tyrant and save the free world.”

Donald Trump is our antagonist, of course. And what an antagonist he has been! As the deep-state spooks and the corporate media have been relentlessly repeating for the last four years, the man is both a Russian-backed traitor and literally the resurrection of Hitler! In terms of baddies, it doesn’t get any better.

It goes without saying that our protagonist is GloboCap (i.e., the global capitalist empire), or “democracy,” as it is known in the entertainment business.

Now, we’re in the middle of Act III already, and, as in every big-budget action movie, our protagonist suffered a series of mounting losses all throughout Act II, and the baddie was mostly driving the action. Now it’s time for the Final Push, but, before all the action gets underway, here’s a quick recap of those previous acts. Ready? All right, here we go …

There democracy (i.e., GloboCap) was, peacefully operating its de facto global capitalist empire like a normal global hegemon (i.e., destabilizing, restructuring, and privatizing everything it hadn’t already destabilized and privatized, and OK, occasionally murdering, torturing, and otherwise mercilessly oppressing people), when out of nowhere it was viciously attacked by Donald Trump and his Putin-Nazi “populists,” who stole the 2016 election from Clinton with those insidious Facebook ads. (For you writers, this was the Inciting Incident.)

GloboCap did not take this well. The deep state and the corporate media started shrieking about a coming “Age of Darkness,” “The death of globalization at the hands of white supremacy,” “racial Orwellianism,” “Zionist anti-Semitism,” the “Bottomless Pit of Fascism,” and so on. Liberals festooned themselves with safety pins and went out looking for minorities to hide in their attics throughout the occupation. According to GloboCap, every “populist” that voted for Trump (or just refused to vote for Clinton) was a genocidal white supremacist undeserving of either empathy or mercy. Somewhere in there, the “Resistance” was born. (This is the plot point known as the Lock-In, where the protagonist commits to the struggle ahead.)

As is traditional at the opening of Act II, things were looking promising for GloboCap. The “Resistance” staged those pink pussyhat protests, and the corporate media were pumping out Russia and Hitler propaganda like a Goebbelsian piano. Yes, there were obstacles, but the “Resistance” was growing. And then, in May of 2017, special counsel Robert Mueller was appointed, and “Russiagate” was officially launched. It appeared that Donald Trump’s days were numbered!

But, no, it was never going to be that easy. (If it was, feature films would be less than an hour long, not to mention incredibly boring.) There was plenty of action (and an endless series of “bombshells”) throughout the ensuing two years, but by the end of March 2019, “Russiagate” had blown up in GloboCap’s face. “Populism” was still on the rise! It was time for GloboCap to get serious. (This was the classic first culmination, sometimes known as The Point of No Return.)

In the aftermath of the “Russiagate” fiasco, the GloboCap “Resistance” flailed around for a while. An assortment of ridiculous subplots unfolded … Obstructiongate, Ukrainegate, Pornstargate (and I’m probably forgetting some “gates”), white-supremacist non-terrorist terrorism, brain-devouring Russian-Cubano crickets, Russian spy whales, and other such nonsense. Meanwhile, the forces of “populism” were running amok all across the planet. The gilets jaunes were on the verge of taking down Macron in France, and gangs of neo-nationalist boneheads had launched a series of frontal assaults on Portlandia, GloboCap Anti-Fascist HQ, which Antifa was barely holding off.

All wasn’t totally lost, however. GloboCap sprang back into action, successfully Hitlerizing Jeremy Corbyn, the leader of leftist “populism,” and thus preventing the mass exdodus of Jews from Great Britain. And the US elections were on the horizon. Trump was still Russian-agent Hitler, after all, so he wasn’t going to be too hard to beat. All that GloboCap had to do was put forth a viable Democratic candidate, then let the corporate media do their thing. OK, first, they had to do Bernie Sanders (because he was another “populist” figurehead, and the point of the entire War on Populism has been to crush the “populist” resistance to global capitalism from both the Left and the Right), but the DNC made short work of that.

So, everything was looking hunky-dory until — and you screenwriters saw this coming, didn’t you? — the pivotal plot-point at the end of Act II, The Major Setback, or The Dark Night of the Soul, when all seems lost for our protagonist.

Yes, implausible as it probably still seems, the Democratic Party nominated Joe Biden, a clearly cognitively-compromised person who literally sucked his wife’s fingers on camera and who can’t get through a two-minute speech without totally losing his train of thought and babbling non-sequiturial gibberish. Exactly why they did this will be debated forever, but, obviously, Biden was not GloboCap’s first choice. The man is as inspiring as a head of lettuce. (There is an actual campaign group called “Settle for Biden!”) GloboCap was now staring down the barrel of certain swing-voter death. And as if things weren’t already dire enough, the “populists” rolled out a catchy new slogan … “TRUMP 2020, BECAUSE FUCK YOU AGAIN!”

So, all right, this is part where Neo orders up “guns … lots of guns.” Which is exactly what our friends at GloboCap did. The time for playing grab-ass was over. Faced with four more years of Trump and this “populist” rebellion against global capitalism and its increasingly insufferable woke ideology, the entire global capitalist machine went full-totalitarian all at once. Suddenly, a rather undeadly virus (as far as deadly pestilences go) became the excuse for GloboCap to lock down most of humanity for months, destroy the economy, unleash the goon squads, terrorize everyone with hysterical propaganda, and otherwise remake society into a global totalitarian police state.

And that wasn’t all … no, far from it. GloboCap was just getting started. Having terrorized the masses into a state of anus-puckering paranoia over an imaginary apocalyptic plague and forced everyone to perform a variety of humiliating ideological-compliance rituals, they unleashed the identitarian civil unrest. Because what would a color revolution be without rioting, looting, wanton destruction, clouds of tear gas, robocops, and GloboCap-sponsored “moderate rebels” and “pro-regime forces” shooting each other down in the streets on television? (In an homage to Orwell’s Ministry of Truth, the corporate media, with totally straight faces, have been describing this rioting as “mostly peaceful.”)

That brings us up to speed, I think. The rest of Act III should be pretty exciting, despite the fact that the outcome is certain. One way or another, Trump is history. Or do you seriously believe that GloboCap is going to allow him to serve another four years? Not that Trump is an actual threat to them. As I have said repeatedly over the past four years, Donald Trump is not a populist. Donald Trump is a narcissistic ass clown who is playing president to feed his ego. He is not a threat to global capitalism, but the people who elected him president are. In order to teach these people a lesson, GloboCap needs to make an example of Trump. Odds are, it’s not going to be pretty.

See, they have him between a rock and a hard place. As CNN’s Fareed Zakaria explains, on election night, Trump will appear to have won (because the Democrats will all be mailing in their votes due to the apocalyptic plague), but later, once the mail-in votes are all counted, which may take weeks or even months, it will turn out that Biden really won. But, by then, it won’t matter who really won, because one of two scenarios will have already played out.

In Scenario Number One, Trump declares victory before the mail-in votes have been tallied and is “removed from office” for “attempting a coup.” In Scenario Number Two, he doesn’t declare victory, and the country enters a state of limbo, which the Democrats will prolong as long as possible. Either way, rioting breaks out. Serious rioting … not “peaceful” rioting. Rioting that makes the “BLM protests” we have witnessed so far look like a game of touch football.

And this is where the US military (or the military-industrial complex) comes in. I’ll leave you with just a few of the many ominous headlines that GloboCap has been generating:

“This Election Has Become Dangerous for the U.S. Military” — Foreign Policy

“All Enemies, Foreign and Domestic”: An Open Letter to Gen. Milley (“If the commander in chief attempts to ignore the election’s results, you will face a choice.)” — Defense One

“Is Trump Planning a Coup d’État?” — The Nation

“What happens if Trump loses but refuses to concede?” — Financial Times

“What If Trump Won’t Leave?” — The Intercept

“How to Plan a Coup” — Bill Moyers on Democracy

“Whose America Is It?” — The New York Times

Does it sound like GloboCap is bluffing? Because it doesn’t sound like that to me. I could be totally wrong, of course, and just letting my imagination run away with itself, but if I were back home in the USA, instead of here in Berlin, I wouldn’t bet on it.

In any event, whatever is coming, whether this is the end of the War on Populism or just the beginning of a new, more dramatic phase of it, the next two months are going to be exciting. So, go grab your popcorn, or your AR-15, and your mask, or full-body anti-virus bubble suit (which you might want to have retrofitted with Kevlar), and sit back and enjoy the show!