The Last Days of the Trumpian Reich

Before the brave new era of The Great Reset

So, according to the corporate media, this is it for Russian-backed Hitler. Game over. The walls are closing in. It’s the last days of the Trumpian Reich. Get those vuvuzelas ready!

Yes, apparently, the American people, who were all a bunch of Putin-worshipping, white-supremacist neo-Nazis when they elected Trump in 2016, have come to their senses and are going to deliver a landslide victory to “Slappy” Joe Biden and bring down the curtain on this “Age of Darkness,” or save the world from “racial Orwellianism” or the “bottomless pit of facsism,” or whatever.

White supremacy will be defeated and globalization will rise from the ashes! Decency will be restored! Love will trump hate! Black lives will matter!

Slappy and Kamala will immediately fly down and liberate the concentration camps. Trump will face some sort of Nuremberg trial, where he will have to answer for mass-murdering six million people with the Coronavirus by taking off his mask on the White House balcony.

Hillary Clinton will be appointed … something.

Exuberant liberals will pour into the streets, chanting unintelligible slogans through their designer masks and plastic head bubbles. OK, sure, the global economy will be ruined, and millions of people will be unemployed, and homeless, or will have needlessly died, so that GloboCap could simulate an apocalyptic global plague, and foment racialized civil unrest, and just generally create an atmosphere of confusion, depression, and paranoia, but the War on Populism will finally be over … and GloboCap will start to “Build Back Better!” 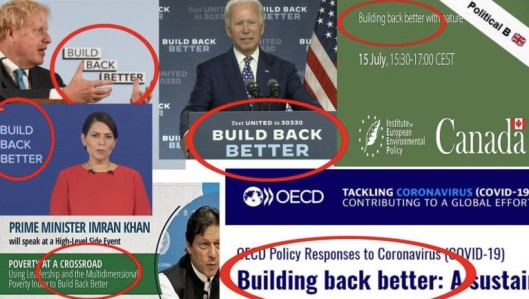 OK, it won’t be “better” right away. As our friends at the World Economic Forum note:

“Thanks to the ongoing pandemic, the world is off-balance – and it will remain so for years to come. Far from settling into a ‘new normal’, we should expect a Covid19 domino effect, triggering further disruptions – positive as well as negative – over the decade ahead. The wave of civil unrest that spread across America and beyond recently may be one example …”

So, all right, maybe not quite the end of the War on Populism, but at least a new stage of it. A chaotic, destructive, violent stage of it, which will require a lot of “emergency measures” and will end up radically transforming the planet into one big pathologized-totalitarian marketplace.

We conspiracy theorists are calling it The Great Reset … but don’t take it from us, take it from TIME magazine, which just happens to be owned by a guy named Marc Benioff, a World Economic Forum Board of Trustees member, whose net worth is approximately $7.8 billion, and who is deeply concerned about the environment, and inclusivity, and economic fairness, as is everyone at the WEF these days. 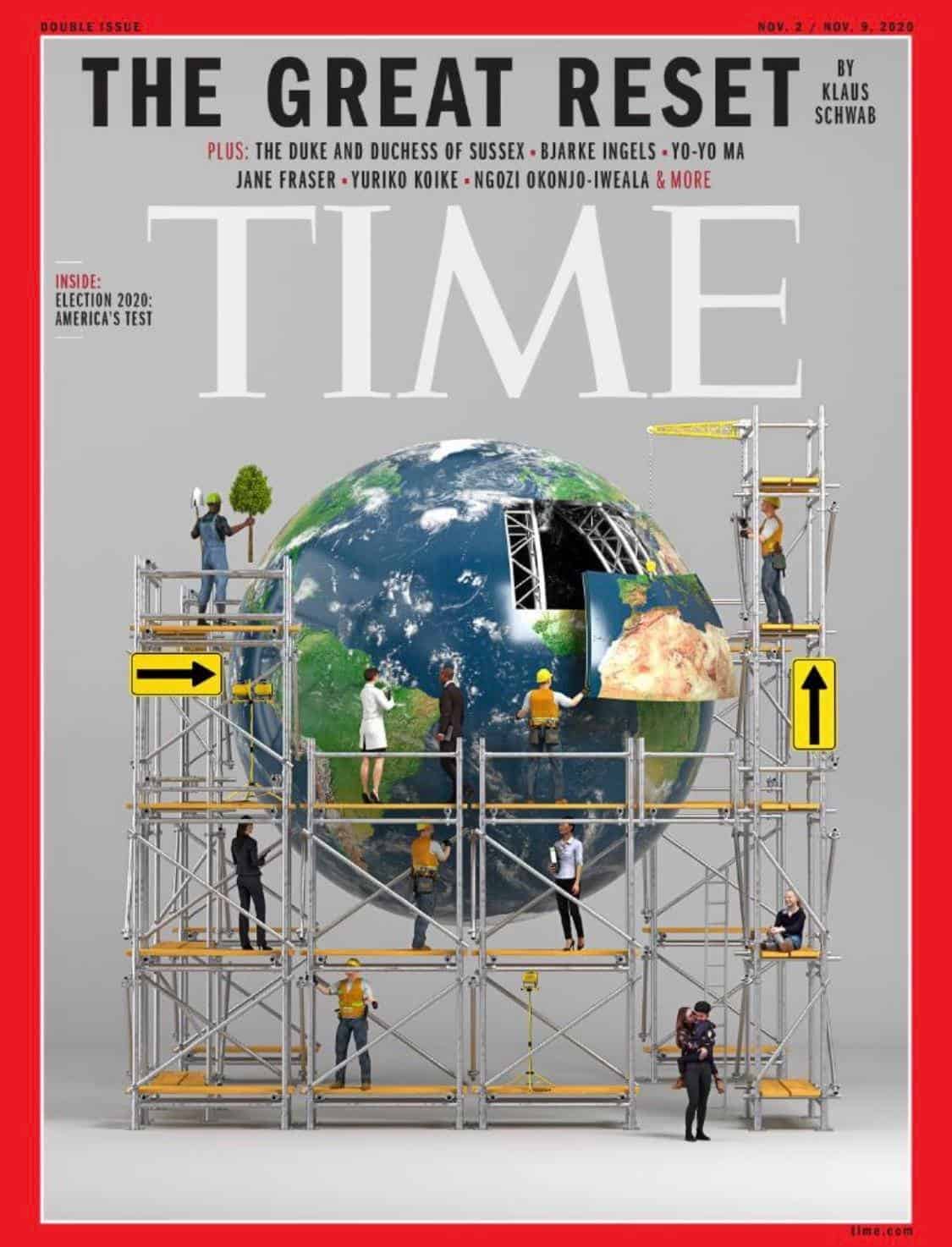 Fortunately, just by sheer coincidence, this apocalyptic global plague has provided Marc and his billionaire buddies (who own the majority of the corporate media, and who meet once a year in a remote location guarded by heavily-armed security to discuss our future with major government leaders) with an opportunity to “reset” capitalism and save the planet from … well, themselves.

That’s not how they see it, naturally. No, the way they see it, they’re not the problem. The problem is … well, the problem is people. Not rich and powerful people like themselves, or the people they need to continue working, consuming, and servicing the interest on their loans, but … you know, all those other people. Uneducated, un-woke, working-class people. Gun-toting, fanatically religious people. Racist, conspiracy-theorizing people. Deplorable people. “Populist” people. People they don’t need anymore.

These people have been a problem recently. Not only are they a drag on the system, they have been actively interfering with it, voting for Brexit, electing Donald Trump, refusing to abandon their traditional values and outmoded ideas (e.g., national sovereignty, freedom of speech, and mammalian biology) and get on board with global capitalist ideology, and have been otherwise being a real pain in the ass.

It was one thing when these problem people were mostly black- and brown-skinned people with “extremist” beliefs in faraway countries that most Western consumers couldn’t care less about, because GloboCap could just bomb the crap out of them, but they can’t really do that here in the West. Hence, the War on Populism that we have been experiencing for the last four years … and whatever new, dystopian stage of it that awaits us in the post-Trump future.

2020 has been a preview of it. The lockdowns, the masks, the “social distancing,” and other so-called “emergency measures,” the Orwellian propaganda, the censorship of dissent, the banning of political protests, the corporate media finally transforming into a full-blown Goebbelsian keyboard instrument, the goon squads raiding people’s homes, the cult-like, totalitarian conformity … it’s just a taste of what’s to come.

This was always in the cards, of course. It was just a matter of time until we got here. The folks at GloboCap are no fools. They know they can’t remake the world into one big happy neo-feudal marketplace without breaking a few proverbial eggs … and not just in those “terrorist” countries, but everywhere, throughout the global capitalist empire. And that is exactly what they intend to do. So, they needed a new official narrative to justify all the broken eggs.

They haven’t settled on an official slogan yet. “The New Normal,” “The Great Reset,” “The Green New Deal” … they’re all just trial balloons at this point. It doesn’t really matter what they call it. It amounts to a new type of totalitarianism. As I noted in my previous column, “[i]t isn’t national totalitarianism, because we’re living in a global capitalist empire, which isn’t ruled by nation-states, but rather, by supranational entities and the global capitalist system itself.” But it is totalitarianism nonetheless.

They aren’t hiding it. They’re spelling it out, not in spittle-flecked Hitlerian speeches, but, clearly, unmistakably, in corporate-speak. Here is Klaus Schwab, Chairman of the WEF:

“The world must act jointly and swiftly to revamp all aspects of our societies and economies, from education to social contracts and working conditions. Every country, from the United States to China, must participate, and every industry, from oil and gas to tech, must be transformed. In short, we need a ‘Great Reset’ of capitalism.”

I added emphasis for those new to corp-speak. And, for those interested in reading more about Klaus Schwab, Winter Oak has published this disturbing profile, which you can also read on Cory Morningstar’s blog (along with a lot of other censored content).

Sorry … I was supposed to be writing about the final days of the Trumpian Reich, and I got all sidetracked with this GloboCap business. I hope you’ll forgive me for not being able to get all fired up about the election next week. Given everything else that is happening, and everything that has happened over the last four years, I’m just having a little trouble believing that there is any realistic scenario wherein GloboCap lets Trump serve a second term, regardless of who actually wins. So, that kind of takes all the suspense out of it.

Don’t worry, though, I’ll get back on the horse when the post-election rioting begins, and Donald Trump finally goes full-Hitler, declares himself Führer, dissolves the Congress, and orders his legions of Russia-loving white supremacists to start rounding up the Jews, as the corporate media, the fake “left” media, the Intelligence Community, the Democratic Party, fascism experts, Hollywood celebrities, and every hysterical liberal in existence have been promising he would since 2016.

Seriously, if he doesn’t go full-Hitler this time, and start rounding up and mass-murdering somebody, or else order the nuking of the United States and then blow his brains out in his underground bunker, some people are going to have some explaining to do.