The practicing Jews have risen up against lockdown tyranny 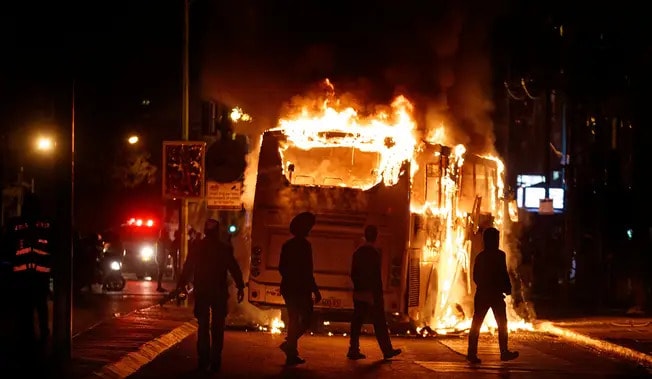 Police are preparing for violent protests in the ultra-Orthodox community to continue until the current coronavirus lockdown ends and have beefed up their forces in Jerusalem and the Tel Aviv suburb of Bnei Brak, where most of the recent violence has occurred.

Hundreds of members of the radical ultra-Orthodox Jerusalem Faction rioted in Bnei Brak late Sunday night against police enforcement of coronavirus restrictions. Protesters who had gathered near the city’s central synagogue threw stones at officers, prompting one to fire his gun in the air after he reportedly feared for his life. Hundreds of protesters blocked main roads in the city, and some attacked news teams from Kan 11 public television and Channel 13. Police used stun grenades to try to disperse the crowds.

Near midnight, rioters torched a bus and attacked its driver, Eli Tzipori, with rocks and pepper spray. Tzipori, 41, was lightly injured in the attack. The blaze prompted authorities to evacuate buildings on the street, and police dispersed protesters with stun grenades. Police said the rioters threw stones and hit other buses as well as the mayor’s car, and tried to break into a fire station while obstructing the path of fire trucks leaving the station.

Police arrested 10 suspects on suspicion of involvement in the violence; the detention of one of them, a minor, was extended Monday by one day.

Bnei Brak Mayor Avraham Rubinstein backtracked on Monday and condemned the violence that rioters had engaged in on Thursday night and Sunday night in his city. He said the city would provide police with security camera footage at its own initiative, but blamed the polce for the escalation. The police are a national force, entirely separate from the municipal government.

“We will not accept a situation in which a handful of rioting extremists sow destruction and cause anarchy,” said Rubinstein. “The city, in cooperation with the police, will eradicate these acts.”

On Sunday evening, Rubinstein had laid the blame for the local clashes on the police. He called on the Israel Police and Public Security Minister Amir Ohana to withdraw the police forces from the city “and leave the running of the city to the city.”

“The Israel Police bear the blame for the catastrophe happening in our city for the past few days,” said the mayor. “This is provocative behavior and incitement that is governing the residents of the city with unprecedented violence.”

The violence was condemned in a letter issued Monday with the consent of two leading ultra-Orthodox rabbis, Rabbi Chaim Kanievsky and Rabbi Gershon Edelstein. “This is not the way of the Torah,” read the letter, which was sent to yeshiva students and to the parents of younger ultra-Orthodox school students. It described the violence as having been carried out by “irresponsible people from outside our camp who are inciting the fire of violence ….”

Prime Minister Benjamin Netanyahu said Monday, “The police are not acting without restraint. They are operating as is necessary, and the people need to cooperate. There are extreme groups at the margins, provocateurs.” Netanyahu added that police will respond forcefully to all disturbances of public order. “It doesn’t matter if it’s in the Haredi [ultra-Orthodox] community or the secular community, in the Jewish community or Arab community. Every Israeli citizen is part of this process, and the majority is cooperating.”

“These pictures of a burning bus or pouring cement on the [Jerusalem] light rail are intolerable. It’s a good thing that everyone who took part is already in the hands of the police, and I’m sure they will be brought to justice,” Netanyahu added.

At a meeting with senior officers on Monday, Police Commissioner Kobi Shabtai ordered district commanders in the regions experiencing resistance from the ultra-Orthodox community – Tel Aviv and Bnei Brak, Jerusalem and the South – to continue deploying a large police presence there. Border Police officers have been called in to patrol Bnei Brak’s streets.

Police said the violence is being led by teens on the fringes of ultra-Orthodox society. But some yeshiva students have also joined the fray, they said, and their presence lends legitimacy to what they termed the “handful” of instigators.

Police sources said Monday that although certain figures within the Haredi community have condemned the violence, their inability to do so unequivocally – and the silence of the majority of the community’s leaders – only contribute to the violence.

“As long as the Haredi leadership and the silent majority keep their mouths shut, we’ll keep seeing the wild behavior that we’ve seen in past days,” a senior police official told Haaretz. “If they all came out as one with a detailed statement condemning all violence, that would calm the waters very quickly,” he said, adding that “95 percent of Bnei Brak residents are wonderful people who obey the rules.”

Aside from Bnei Brak and Jerusalem, police have also clashed with ultra-Orthodox groups in Beit Shemesh and Ashdod over violations of the coronavirus regulations. And since violent clashes in one place often ignite clashes elsewhere, police said they fear the violence may spread to other towns.

Senior officers backed the force’s conduct in Thursday night’s disturbances – when police made massive use of stun grenades and batons – saying this was a necessary response to severe violence that included throwing stones at the police. They also backed the policeman who shot in the air on Sunday after a mob began chasing him.

“The shooting was called for,” one said. “The feeling that your life is in danger is an individual one when a mob is after you, pushing you, and according to the policeman, he also felt something stab his back. Had he fallen, he would have been lynched.”

It turned out that the policeman wasn’t stabbed.

Even routine police activity that has nothing to do with the coronavirus regulations is now being targeted by ultra-Orthodox extremists. On Monday, for instance, when police responded to a call for help over a violent incident in Jerusalem’s Mea She’arim neighborhood, a patrol car was attacked and a policeman was wounded.

Police said their biggest worry is that the violence might intensify due to concerns that have nothing to do with the coronavirus regulations. In Jerusalem, for example, ultra-Orthodox extremists have been attacking the light rail infrastructure because they oppose its route, and these people have joined in the protests against enforcement of the coronavirus regulations in ultra-Orthodox neighborhoods.

Ashkenazi Chief Rabbi David Lau also condemned the riots on Monday, saying, “The rioters in Bnei Brak are underprivileged youths who are desecrating God’s name. They must be denounced. Their path is not the path of the Torah. I am calling on the social welfare authorities to deal with them and for their teachers to teach them morals and proper behavior. There is no justification whatsoever for acts of violence and they must stop it immediately.”

Also Monday, the Tel Aviv Magistrate’s Court extended the detention of four Vishnitz Hasidim, ages 19 through 32, who are suspected of attacking police officers in Bnei Brak on Thursday. In the incident, dozens of residents crowded around police officers who came to enforce the coronavirus regulations and beat them. When the police officers tried to escape, the residents threw rocks at them, opened the doors to their police car, broke its windows and slashed the tires. The police tried but were unable to locate additional suspects, and the four were only arrested after they turned themselves in.

The suspects’ lawyers told the court their clients did not know the people being attacked were police officers, because they had refused to identify themselves, and that dozens of people who took part in the incident were not arrested. The lawyers said the police officers had arrived in civilian clothes, refused to identify themselves or say they were police, and entered the building “violently and defiantly” so the suspects could not have known they were officers. They denied that their clients had broken the car windows and that they should not pay the price for those who did, as they were only a few of the dozens who were there. The police, however, said the officers had identified themselves as such.

The judge said the defendants’ version of the incident does not correspond with what happened, adding that they implicated themselves to a certain extent. The judge called the incident “shocking, almost a lynching, in which a car tried to escape from the scene … and all those involved were trying to prevent it, while they were beating on the car with their hands, screaming, trying to rip off the doors of the car and all sorts of other violent and frightening acts.”