In order to navigate an impossibly complex world, we take shortcuts, build logical frameworks and adopt ideologies.  These are lenses through which we view events, our own reality in a sense.  Over time, these lenses become hardened and extremely difficult to change, regardless of the counter evidence.

There are essentially two views of the world: order and chaos.  Some see a natural order: the food chain, pecking orders, innate behaviors, complex adaptive systems, natural selection.  Others see chaos requiring direction by a group of experts.

At least when it comes to economic activity, the overwhelming majority adopt the chaos view.  They fail to grasp Adam Smith’s “invisible hand” of mutually beneficial trade, Friedrich Hayek’s “pretense of knowledge” with regard to central planners, or Frederic Bastiat’s “seen and unseen costs” concerning the unintended consequences of economic policies.

Interventionists dread uncertainty; above all, they fear losing control.

Whenever a problem presents itself, the natural response of the interventionist is to “do something.” The government is all too happy to oblige, but it needs experts to offer advice and, more importantly, to provide a patina of legitimacy.  The mainstream media has a role in granting the public access to these experts, acting as the conveyor belt of official opinion.

What these three groups have in common – government bureaucrats, experts and journalists – is an unswerving belief in intervention.

Imagine an expert who advocates a laissez faire approach to any problem.  He or she wouldn’t advance very far in “the expert model.”  For example, Alan Greenspan, a social climber above all, realized this at an early age and changed his worldview (which originally favored a gold standard).  Others, like Henry Kissinger, are plucked out of obscurity and promoted because their views are in perfect alignment with those of the political establishment.  Milton Friedman was a clever, but unusual choice for respectability.  Known for his free market views, Friedman was a monetarist who argued for greater intervention by the Federal Reserve in the 1930s to prevent the Great Depression.  He would later influence a man named Ben Bernanke, champion of “helicopter money.”

In order to rise through the ranks, economists, geopolitical consultants, regulators, and health experts must conform to the interventionist script.

After the initial wave of investor panic, a wave of Covid-19 panic followed as the expert model switched into high gear.  President Trump declared a national emergency on Friday, March 13.  Two days later the U.S. Centers for Disease Control and Prevention (CDC) recommended that gatherings be limited to 50 people.  On Monday, highly regarded epidemiologist Neil Ferguson and Imperial College in London issued a report declaring Covid-19 the worst public health threat since the 1918 Spanish flu and warned that without “suppression,” 81% of the populations in the UK and U.S. could be infected, leading to 510,000 and 2.2 million deaths respectively.  The White House took these projections seriously and immediately issued guidelines limiting gatherings to 10 people.

As terms like “flatten the curve” and “social distancing” went viral, nearly all state governments (46 of 50) responded with shutdowns of “non-essential” businesses and “shelter-in-place” orders.  The controls, predictably, became ever more draconian and absurd, including filling skateboard parks with sand and removing inner city basketball rims.

The mainstream media did its part to sensationalize the issue, filter information to confirm its biases, abuse statistics, and flat out lie.  As Jeffrey Tucker of American Institute for Economic Research lamented,

After a full day of media interviews on the only issue that exists, I’m completely astonished at the amazing display of fake knowledge, fake models, fake cause-and-effect analysis, fake expertise, fake mental paradigms, fake timelines, and so on, that saturate media culture.

Simple one-size-fits-all solutions to complex problems do not exist in the real world, yet this is the lie that the crowd swallowed whole.  Why?  The main reason is that people overwhelmingly see the world through the lens of chaos and danger in constant need of fixing and being made safe by experts.  People have also become devoid of critical thinking, dependent on the high priests and conditioned to accept their proclamations as gospel.

Is such faith justified?  Most would be shocked at the fallibility of so-called “experts,” especially under the following conditions:

Prominent interventionists warned about overpopulation in the 1960s, predicted global cooling and peak oil in the 1970s, lauded the Soviet economic model in the early 1980s, and feared the Japanese had adopted a superior industrial policy model in the late 1980s.  The 1985 edition of Economics, Nobel laureate Paul Samuelson’s widely used textbook, included this passage:

What counts is results, and there can be no doubt that the Soviet planning system has been a powerful engine for economic growth…   The Soviet model has surely demonstrated that a command economy is capable of mobilizing resources for rapid growth.

Not to be outdone, mathematical modelers like Neil Ferguson also have a long track record of exaggerating mortality rates of pandemics.  Says Tom Woods of Ferguson,

He has spent his life making wild predictions of doom.  He said 200 million could die from bird flu; the grand total was 282 people.  He said 65,000 people in the UK would die from swine flu. The actual number was 457.

The best response to a health or economic crisis can’t possibly be to “do nothing,” can it?

The question assumes a false premise.  Whenever a threat appears, people act.  The choice is not between doing nothing or something, but between making decisions freely as individuals or coercively according to authorities.

At the end of the day, the coronavirus is a knowledge problem.  How can we gather as much relevant information as possible?  In The Fatal Conceit, Friedrich Hayek argued that knowledge is dispersed:

To the naive mind that can conceive of order only as the product of deliberate arrangement, may seem absurd that in complex conditions order, and adaptation to the unknown, can be achieved more effectively by decentralising decisions, and that a division of authority will actually extend the possibility of overall order.  Yet that decentralisation actually leads to more information being taken into account.

In contrast, this information is unavailable to the central planner who suffers from what Hayek called the “pretense of knowledge.”  He is essentially flying blind.

People are not automatons.  They have unique preferences and make tradeoffs.  This requires market-driven prices to direct them, i.e. allow them to weigh costs and benefits. 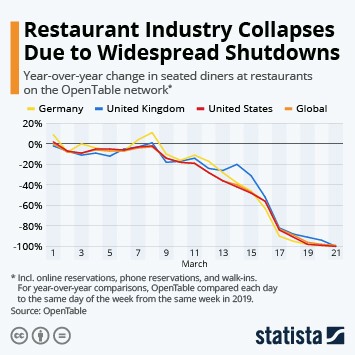 For example, let’s say you own a trendy restaurant with a young clientele.  Assuming there are no lockdown orders, should you remain open?  This will depend in part on your financial situation and assessment of risk, including liability.  Your customers will consider risks and rewards.  You may have to experiment with various methods to assure their safety.

The market would sort this all out and gather critical information in the process.  Shutdowns erase this economic activity and the information it provides.

The promise of bailouts hampers the market as well.  It is hard to believe airlines and cruise lines would idle so much capacity with fuels costs this low (briefly going negative on April 21), or that state governments would destroy their tax bases, unless they felt a rescue was forthcoming from the federal government.  On the other hand, Sweden has taken a more laissez faire approach knowing there is no one to bail them out (without the feared spike in deaths).

The normal response to a novel infectious disease (e.g., SARS, ebola, swine flu) is targeted isolation, not universal isolation.  Even the Imperial College report admits that suppression only kicks the can down the road:

The more successful strategy is at temporary suppression, the larger the later epidemic is predicted to be in the absence of vaccination, due to lesser build-up of herd immunity.

The commonsense wisdom of the doctors apparently began to wane in 2006 as the influence of the modelers waxed during the Bush administration.

The cure is worse than the disease

Why spend so much time discussing belief systems?  We’re at a critical juncture. For investors, knowing which fork in the road to take will depend entirely on how you view the world.

If you’re an interventionist, you see a true black swan event – a global pandemic – followed by a necessary and emphatic response.  Recovery may take a while, but it’s assured because the authorities went big.

If you’re an anti-interventionist, the cure is worse than the disease.  The economy’s immune system was already depleted by decades of painkillers and stimulants and in a fragile state.  The patient is no longer responding and higher doses of the same medicine could kill him.

The imperative to “do something” has carried the day.  While the resulting hysteria has done incalculable destruction, much will be reversed as the global economy reopens.  In many ways, the “new normal” will look a lot like the old normal.  People will go to restaurants, bars, churches, beaches, concerts and sporting events, go on picnics and fly on planes without wearing masks and keeping their distance.  Life goes on.

Little attention is being paid to the trillions of dollars in bailouts and stimulus that were rushed through while people were scared out of their wits.  This will cause far more lasting economic damage, even to “essential” businesses that so far have stayed above the fray.