Team Bush Hawks Are Stepping Over Themselves to Endorse Biden 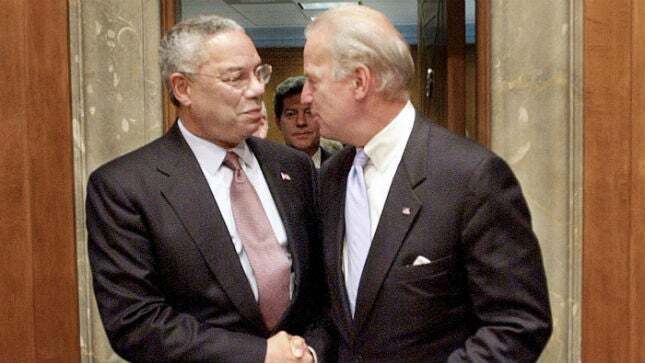 Former Secretary of State Colin Powell was the surprise Republican who popped up at Tuesday night’s edition of the Democratic National Convention, where he delivered a blistering assessment of President Donald Trump’s foreign policy and endorsed Democratic nominee Joe Biden.

“With Joe Biden in the White House, you will never doubt that he will stand with our friends and stand up to our adversaries,” Powell said. “He will restore America’s leadership in the world and restore the alliances we need to address the dangers that threaten our nation.”

As if the message wasn’t clear enough, the DNC followed up with a short video retrospective about the cross-aisle friendship between Biden and the late Republican Sen. John McCain.

It’s not all that surprising that some George W. Bush-era Republicans have crossed over to Biden’s side this time around: Trump’s victory in the 2016 Republican primary was a repudiation of the Bush-era of Republican politics—a time when Powell and McCain were key players in national politics—and the ill-advised, intractable wars that were launched during it. The Trump era has caused many problems for the Republican Party and for America as a whole, but one of the few good things to come of the last four years has been the exile of the neoconservatives to the political wilderness. [A very partial and incomplete “exile”.]

And yet, Trump’s victory over the architects of America’s early 2000s foreign policy disasters seems hollow. He largely failed to follow through on the mandate he was handed by the voters who chose him over his more interventionist opponents in both the Republican primary and the general election.

It’s true that Trump hasn’t launched any new wars. [Actually, that’s not true, but they were brief.] But the number of drone strikes conducted by the U.S. military has risen under his watch. He sent more troops into Afghanistan and is only now drawing those levels back down to where they were when he took office. In a memorable interview with Axios‘s Jonathan Swan a few weeks ago, Trump could offer few specifics about when he would finish off a long-planned withdrawal from America’s longest war. When pressed to say how many troops would remain in Afghanistan on Election Day, Trump said “probably anywhere from four [thousand] to 5,000.”

Instead of bringing the troops home, he’s merely shuffled them around the Middle East with little apparent purpose other than occasionally suggesting that America ought to seize the region’s oil supply.

Trump’s fans say he has reoriented huge amounts of America’s foreign policy, but how much of that is beneficial or lasting? Yes, Trump has picked some silly fights with European leaders and nudged them to contribute a larger share toward NATO.

But everywhere else, Trump has squandered this opportunity. His confrontation with China has imposed millions of dollars of new taxes on American consumers and businesses, failed to produce meaningful changes in U.S.-China trade policy, and potentially set the world’s two biggest economies on course for a new cold war. Surely there must be a more skillful—or at least a less economically damaging way—to oppose China’s illiberal behavior at home and abroad. If only Trump hadn’t alienated the very allies that might make a different approach possible.

Anyone who wants to see America take a less militant approach to the world’s problems shouldn’t be cheering for neocons to build a new nest within the Democratic Party. And the fact that Trump, who has at times seemed legitimately appalled by some of the horrors of war, wasted four years by failing to undo the mistakes Powell and his friends made is a tragedy.