"The Afghan military is in complete disarray.... has lost five of its seven corps headquarters" 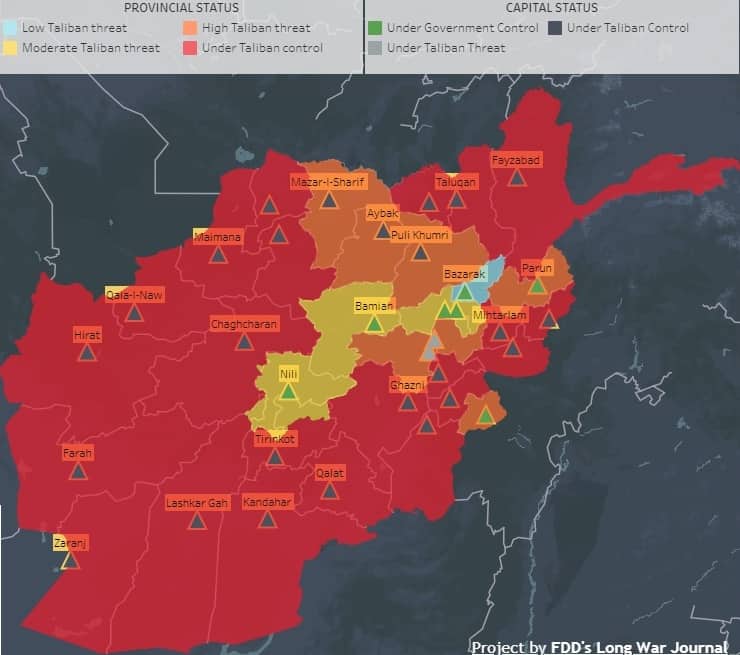 The Taliban’s seemingly unstoppable offensive, which has seen the group take control of more than half of Afghanistan’s provinces in only nine days, is circling around the country’s capital and largest city in Kabul. Today the Taliban took control of the provinces of Paktika, Paktia, Laghman, Maimana and Kunar as well as Mazar-i-Sharif, Afghanistan’s second largest city, and is consolidating its control of the east in preparation for its culminating assault on Kabul.

The Taliban abandoned Kabul in Nov. 2001, shortly after the U.S. invasion. The war-torn city’s population was then hovering around 500,000 but has rapidly urbanized in the two decades since, serving as the center for Afghanistan’s growing middle class, and Kabul’s population today is estimated at 4.6 million.

Now, Kabul is under direct threat of falling to the Taliban. The Taliban is close to taking most, if not all of eastern Afghanistan and has already secured the route to Kabul by taking control of Ghazni, Logar, Laghman, Paktia, and Paktika over the past three days.

The Taliban has entered Maidan Shahr, the capital of Wardak. Given the swift fall of 21 provinces and 24 capitals, it is unlikely Maidan Shahr will hold out for long in this tidal wave of Taliban victories.

If Maidan Shahr and thus Wardak falls, the Taliban will be knocking at the gates of Kabul. Wardak is just seven miles from the city.

Mihtarlam, Sharan and Gardez, the capitals of the eastern provinces of Laghman, Paktika , Paktia respectively, Asadabad, the capital of Kunar in the northeast, and Maimana in the north fell to the Taliban after just several days under pressure. Sharan, Gardez, and Asadabad were fully government controlled before the Taliban waltzed into the city and seized them with minimal fighting. The Taliban preceded the assaults on Sharan, Gardez, and Asadabad by taking control of key districts in the provinces over the past several days.

The Afghan military is in complete disarray, and has been defeated in detail across the country. The Afghan National Army has lost five of its seven corps headquarters – the 203rd in Gardez, the 205th in Herat, the 209th in Mazar-i-Sharif, 207th in Kandahar, the 2015th in Helmand, and the 217th in Kunduz. Only one army corps, the 201st in Kabul, remains. The Army National Army’s 111th Division is also headquartered in Kabul.

The Taliban’s strategy has given the Afghan government nowhere to run. After consolidating its control of more than 170 of Afghanistan’s contested districts, the Taliban swiftly moved to take the strategic north and deny the country’s power brokers their base of support. Concurrently, the Taliban seized the west and south, both which are firmly under Taliban control. With these three key regions secured, the Taliban has worked its way up from the south to quickly gobble up the eastern provinces, with the final objective being the assault of Kabul.

1 Comment
Leave A Reply
Cancel Reply
Read the rules before you think about commenting
Telegram Group
AE has a supporting readers Telegram group where we hang out and exchange leads and takes. If you have ever donated to AE drop me a line on email and I'll send you the link to join.