UPDATE: Maarat al-Numan has since been captured by Syrian army 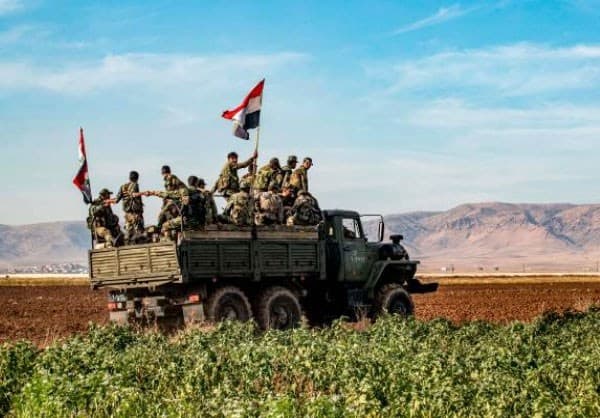 Editor’s note: Well you figure it out. December 20th a Syrian army offensive on Al-Qaeda-held Idlib started, took ground for seven days with relative ease, then suddenly stopped. A pause first thought to have been caused by poor weather which prevented effective air support soon stretched into weeks, finally resulting in another cease-fire arranged in the background by Turkey and Moscow.

However almost as soon as the cease-fire was signed, fighting broke out again. The result is that the Syrian army has since January 25th again been advancing, taking over the M5 highway in the southern part of the Idlib pocket, enveloping the large and strategic town of Maarat al-Numan that is believed to be the goal of the offensive from three sides, and encircled another Turkish military outpost.

An excellent map site to keep sense of the geography: Syria Livemap

During the last few weeks, the SAA redeployed its forces to the eastern side of the Idlib front. This included moving the 4th Armored Division from Jish al Shigour to Aleppo. In addition to the 4th Division, the SAA order of battle along this front includes three divisions of the 3rd and 4th Corps, 4 brigades of the 5th Corps, the Republican Guard 30th Division along with the 25th Special forces Division and Liwa al Quds.

The northern sector of this front, west of Aleppo was the most difficult area to make an advance due to the urban density of the western suburbs and strong jihadi defenses. The jihadis brought reinforcements into this area during the last weeks, most of them with experience in urban combat. This area is far more critical to the jihadis’ and Turkey’s desire to maintain a presence in the Aleppo-Idlib region. This is where the jihadis will defend. To the south, especially in the Maarat al Numan area, the jihadis probably see the will of Allah in eventually being driven out just as they were from Khan Sheikhun.

I watched as various tweeters and rumor mills reported the actions during the weekend. I am not surprised as the SAA’s progress. I gather Erdogan is not surprised either. At the same time he was sending a couple thousand of his jihadis to Libya, he was crying like a rat eating onions to Putin begging for a ceasefire in Idlib. Russian and Syrian aerospace forces have been pounding the living daylights out of the jihadis for weeks, slowing only during occasional bouts of bad weather. I noticed a video of jihadis all in helmets and body armor. I’m sure this is in response to the continuous R+6 air and artillery bombardment.

I think the overall plan for this offensive was brilliant. The SAA massed enough forces along the entire front to prevent the jihadis from launching a successful counterattack to relieve pressure on Maarat al Numan or the western outskirts of Aleppo. This also prevented the jihadis from concentrating their forces as either of these objectives.

Conservation of forces seems to be the order of the day for both sides. The jihadis are choosing to withdraw under heavy air and rocket fire (SAA BM-21 Grad) rather than DIP (die in place). As the jihadis withdraw, the SAA is not rushing in immediately. They have learned that the jihadis often launch strong counterattacks before the SAA can consolidate on the objective. I disagree with SouthFront about the SAA storming Maarat al Numan. I believe they are trying to force them to vacate the city on their own. The Syrian Army Air Force has already destroyed several jihadi convoys as they attempted to flee to the north on the M5 and to the west. The SAA also discovered and destroyed a large tunnel from Maarat al Numan to the Idlib countryside. Rather than storming the city or fully surrounding it, I believe the 25th Special Forces Division (formerly known as the Tiger Force) will advance north along the M5 towards Saraqib. This will support the SAA units attacking from the east.

Judging by the videos, this still appears to be a platoon leader’s war. Assaults are undertaken by groups of 20 to 30 infantryman supported by a tank and a couple of BMPs. Perhaps that’s why consolidation on the objective remains such a fragile time for the SAA. This also is a caveat about the SAA order of battle. All those divisions and brigades are nowhere near the size of Western units. If those regiments and brigades are battalion size, I’d be surprised. SAA tanks are often used as sniper platforms. I have seen no videos of mass armor assaults even though this seems to be excellent tank country. The reason for this may be that this is also excellent country for ATGMs.

This emphasis on conservation of forces developed during the darkest days of the Syrian war before the Russians were persuaded to intervene by Qasem Soleimani. The SAA could not afford to squander the few forces it had left. It’s a healthy approach for any military.

I’m confident that this offensive will end with the entire M5 under the SAA’s control at the very least. The question is what’s next? Will the SAA head for the city of Idlib and approach Jisr al Shigour from the west or will they concentrate on widening control around Aleppo. All in good time, my friends, all in good time.

UPDATE — Maarat al-Numan has now been taken without a fight as Islamist rebels fled what had been the 3rd largest town still in their hands!