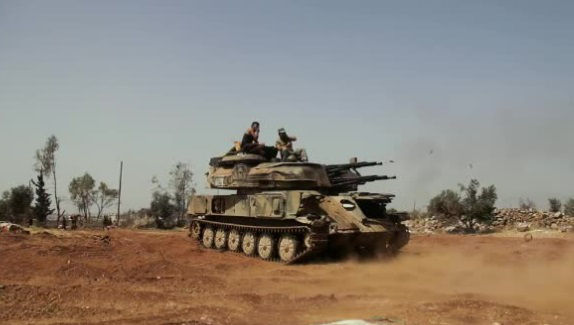 During the last months the Syrian government made some progress in the norther part of Hama governorate on the border to the jihadi held Idlib governorate. The breach of the jihadi defense lines must now be used to develop a larger campaign.

The maps show the progress between May 15 2019 and today (Red – government control; Green – jihadi control).

The current operation is a pincer movement on the western and eastern side of Khan Shaykhun. It is designed to envelope the jihadi held towns Al Lataminah, Kafr Zayta, Khan Shaykhun and Morek.

The north of Hama and Idlib governorate is held by the al-Qaeda aligned Hayat Tahrir al Sham (HTS). HTS defeated and removed several Turkish supported ‘rebel’ groups from the area it rules. On the Syrian side the Tiger Force and the 4th division are the main units in the current fight.

The first phase of the operation, which began three month ago and was interupted by several ceasefires, proved to be difficult. The jihadis have good equipment which includes a large number of U.S. supplied TOW anti-tank missiles with 5,000 meter reach. They also have a significant number of artillery missile launchers. Their positions were well prepared and they fiercely defended each and every house. They counterattacked with some success by utilizing vehicles with suicide bombers.

The losses of the Syrian army during the first phase were unacceptable high. This led to a change of tactics. The Syrian and Russian airforce began an extensive bombing campaign with hundreds of air and artillery strikes per day against jihadi positions. Drones were used to find mobile missile launchers hidden in fruit plantations and to direct artillery and bombers to those aims. ANNA News published several videos of the extensive campaign (1, 2, 3 – Engl.subs). The air campaign cost the jihadis a significant amount of material and personal. Only one of the attacking planes, a Syrian SU-22, was lost during the fight.

The Syrian army also began to make large night attacks. Its new T-90 and modernized T-72 tanks have excellent thermal night vision and can destroy targets at long distances. The infantry can proceed under their protection. Instead of fighting along roads from town to town the army moved to take high ground first and to proceed from there. Using flanking operations the troops broke through several prepared defense lines. The jihadis are now on the run. This ANNA video (engl.subs) shows last week’s operation to liberate the town of Al Habit (Al Hobeit) and gives a good impression of the new tactics. The army has since moved further to the north east of Al Habit and took Kafr Ayn and Tell As.

The encirclement north of Khan Shaykhun will close within the next several days. The jihadis who stay within the cauldron will have little chance to survive. They will most likely flee north along the M5 highway.

The soon enclosed area also holds one of the Turkish manned ceasefire observation posts. While these posts are supposed to supervise the ever breaking ceasefire they are in fact used as supply and fire direction centers for the jihadi forces. It will be interesting to see the Turkish reaction when the Syrian army knocks on the observer post’s door.

There continues to be deep divide in the anti-Syrian front. HTS pushed back against Turkish attempts to control the area it holds. It rejected the various ceasefires that Turkey, Russia and Iran agreed upon in the Astana process. When its defense lines broke it refused offers from the Turkish controlled ‘National Army’ gangs to come to its help.

– When the factions of the National Army recently attempting to send fighters to Idlib, HTS rejected anyone from Sultan Murad, Firka Hamza, Sultan Suleyman Shah and Jaysh al Islam. A 20-people delegation of Jaysh al Islam to negotiate a free passage was imprisoned by HTS

Russia and Syria will continue to use this split between the various groups Turkey officially or unofficially supports to incite more infighting on the ‘rebel’ site. It proved to be one of their best weapons.

Recovering the area and Khan Shaykhun, a city with 35,000 pre-war inhabitants, will be a significant victory. But this operation is only the opening battle of a larger campaign. The rather slow breach of the frontline will now be turned into a dynamic campaign. The larger plan behind this is likely of Russian heritage:

[T]he Soviets developed the concept of deep battle and by 1936 it had become part of the Red Army Field Regulations. Deep operations had two phases: the tactical deep battle, followed by the exploitation of tactical success, known as the conduct of deep battle operations. Deep battle envisaged the breaking of the enemy’s forward defenses, or tactical zones, through combined arms assaults, which would be followed up by fresh uncommitted mobile operational reserves sent to exploit the strategic depth of an enemy front. The goal of a deep operation was to inflict a decisive strategic defeat on the enemy’s logistical abilities and render the defence of their front more difficult, impossible—or, indeed, irrelevant. Unlike most other doctrines, deep battle stressed combined arms cooperation at all levels: strategic, operational, and tactical.

The Syrian army will pursue the fleeing jihadis along the M5 highway with a strong armored forces upfront and under the bombing cover of the airforce. Defended towns along the road can be enveloped from east and west, surrounded, and left to the following infantry for clean up. The run must not stop at least until the forces reach Saraquib at the merging of the M4 and M5 highway. The tactical deep battle can then be further developed to recover all of Idlib governorate.

To support the push from the south additional fronts must be opened west of Aleppo along the M5 and from Latakia in the west along the M4 highway through Jish ash Shugur and on to Saraqib. The battle to breach the frontline in Latakia has been ongoing for some time but a decisive breakthrough has yet to be achieved.

The recovery of the M4 and M5 highways is of uttermost importance for the Syrian economy. Syria, Russia and Iran should resist all calls from the U.S. and Turkey to stop their campaign before that job is done.

Idlib Offensive
2 Comments
Reply To Ray Douglas
Cancel Reply
Telegram Group
AE has a supporting readers Telegram group where we hang out and exchange leads and takes. If you have ever donated to AE drop me a line on email and I'll send you the link to join.
Anti-Bellum
Antiwar.com
Brownstone Institute
Edward Slavsquat
Fourth World
Swiss Policy Research
The New Kremlin Stooge
Read the rules before you think about leaving a message
Anti-Empire