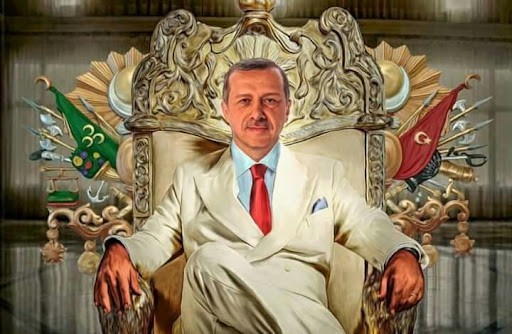 What’s worse, over the second half of 2021 the loss of value kept intensifying with inflation hitting 20 percent in October and the exchange value to the dollar declining further to over 10 liras.

Losing 75% of the purchasing power in eight years, and then another 25% over just three months is probably a situation calling out for an intervention by the highest reaches of power, an intervention by Sultan Erdogan himself. And intervene he did — Erdogan held a speech praising easy money policies and cut interest rates further.

The result is that one US dollar now buys 12 Turkish liras.

This man hates the Turkish lira like he hates secularism. If he was half as effective at exporting his Muslim Brotherhood Islamism as he has been at murdering Turkey’s currency we might now be looking at an MB commonwealth stretching from Turkey to Syria to Egypt to Libya, which he also attempted but has been far less successful at.

One must almost admire the sheer pigheadedness of his self-immolating easy money fanaticism. You’d think it was one of the Five Pillars.

After the interest rate cut:

Turkey’s lira dropped to an all-time low on Friday as investors reacted with bewilderment to the previous day’s cut in interest rates, which some analysts say has plunged the country into a currency crisis.

The lira had rebounded in morning trading from a heavy fall, but sustained a fresh jolt of selling by the London afternoon. The currency was recently trading down around 2 per cent at TL11.32 per dollar.

The currency has declined more than 30 per cent this year after investors lost faith in the authorities’ ability to manage the economy in the face of inflation that accelerated to almost 20 per cent in October. Turkey’s central bank under governor Sahap Kavcioglu has slashed rates from 19 per cent since the start of September — under heavy pressure from president Recep Tayyip Erdogan — despite the runaway price rises.

“If a currency loses more than one-third of its value on the FX market in less than three months then it is probably justified to speak of a crisis,” said Ulrich Leuchtmann, Commerzbank’s head of FX research.

Investors said there was little prospect of a lasting recovery for the lira unless the central bank could somehow free itself from Erdogan’s unorthodox belief that high interest rates fuelled, rather than tamed, inflation.

Erdogan, who fired Kavcioglu’s well-respected predecessor in March, has stepped up his campaign for lower borrowing costs in recent months in a bid to bolster growth as he faces a slide in popularity.

The Turkish lira hit yet another record low on Tuesday morning after President Recep Tayyip Erdogan praised a recent interest rate cut and declared that his country was fighting an “economic war of independence”.

The currency, which is down more than 30 per cent against the dollar this year, suffered its 11th successive day of losses after the Turkish president used a combative speech to expound his vision for the country’s economy. It fell almost 3 per cent against the greenback to trade at about 11.7 per dollar.

Erdogan, a life-long opponent of high interest rates, used a speech on Monday night to declare that he was “pleased” the bank had cut rates for the third month in a row last week, despite warnings from economists it would stoke inflation that is already running at an annual rate of 20 per cent and further destabilise the currency.

Painting a picture of a dark global conspiracy aimed at subjugating Turkey, the Turkish president said his nation would not give in to economists, opportunists and “global financial acrobats” calling for interest rate rises.

The government was prioritising growth, he said, to encourage investment, production, exports and unemployment. “That’s why we pay no attention to the clamour of the doomsayers,” he said. “With the help of God and the support of our people we will emerge victorious from this war of economic independence.”

A US Dollar = 12.06 Turkish Lira pic.twitter.com/gDgcqmTAUv

Erdogan basically revealed that he has an export driven economic model that would produce more investment, trade and employment with a depreciated Turkish Lira

He says Turkey is fighting its “economic war of liberation”

What the actual fck

US Dollar appreciated against Turkish Lira by nearly 16% in a single day!

8 Comments
Leave A Reply
Cancel Reply
Telegram Group
AE has a supporting readers Telegram group where we hang out and exchange leads and takes. If you have ever donated to AE drop me a line on email and I'll send you the link to join.
Anti-Bellum
Antiwar.com
Brownstone Institute
Edward Slavsquat
Fourth World
Swiss Policy Research
The New Kremlin Stooge
Read the rules before you think about leaving a message
Anti-Empire