Su-57s Aren’t as Stealthy as F-22s — They’re Not Trying to Be. Russia Has a Totally Different Design Philosophy

I think the Su-57 is a misunderstood aircraft in terms of design philosophy, purpose, and program viability. The Su-57 is a compromise between reducing the radar cross section and building a highly maneuverable air superiority fighter, with great performance at high speeds, and at different altitudes. It has innovative features which should qualify it for the 5th gen moniker.

That said, the Su-57 does not represent an aircraft dedicated to stealth, and is not based around a philosophy of optimizing its radar cross section to attain first look/first kill in beyond visual range combat. As a stealth platform it is marginal at best, perhaps better than a super hornet, and much stealthier than any 4th gen or 4+ gen aircraft, but nowhere close to F-22.

The Su-57 is not intended to compete on stealth with U.S. F-22/F-35 or even Chinese J-20. It is not meant for penetrating integrated air defenses, conducting deep strike missions, or conducting offensive counter air within enemy air defenses. To compare its design for such roles is to engage in mirror imaging.

The Su-57 appears designed to engage enemy stealth aircraft within its own air defenses, guided to target by low frequency radars, leveraging its own low observation properties to get closer to the adversary, and a mix of onboard sensors that can help with detecting low observable aircraft once within close range (IRST). I suspect it is intended to plug gaps or corridors in Russian air defense that may exist for very low observable aircraft.

The Su-57 has a SH121 multi-functional system consisting of N036 Byelka radars, which feature five active electronically scanned array radar antennas. Three in the X-band, one primary nose mounted, two smaller radars in the cheek position, plus two L-band matrices in the wing edges. Those can be used for IFF and electronic warfare, probably not powerful enough for any real stealth search/detection capability.

Between the five AESA antennas, and the dedicated ECM suite in the tail, the Su-57 should be a capable electronic warfare platform, and leverage EW strengths to compensate for some of its shortcomings in stealth.

The fighter could be used to establish local areas of air superiority against 4th gen aircraft, and get close enough to a stealth optimized aircraft to become a problem, especially with passive forms of detection like IRST.

The Su-57 can carry the latest generation of Russian standoff strike weapons, and may have a role in intercepting high value air assets as well, such as AWACS. It has already been shown firing a Kh-59MK2 air-to-surface standoff guided missile. 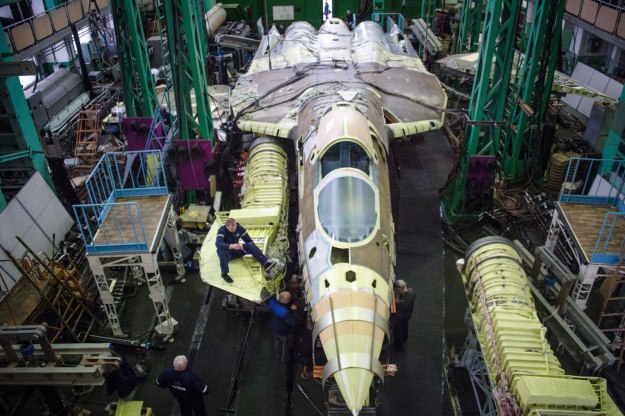 There was no discernible Russian desire to build an advanced sensor fusion platform that could integrate with another ISR infrastructure, or for the aircraft to serve as an ISR platform for the rest of the force. They were not seeking a stealth optimized strike and recon platform for penetrating strikes. On the whole, there is considerable doubt in Russian circles on the viability of stealth in general, and a strong belief that aircraft must retain high performance flight characteristics – including so it can survive in a post-stealth world.

Russia deployed low observation cruise missiles well before the Su-57, and in general, there is stronger interest in making long range guided weapons low-observable rather than planes. There is some suggestion this plane will team with Okhotnik-B or prospective drone platforms, but that may be aspirational at this stage.

From a stealth perspective, there are significant problems with the airframe design as is, but these were conscious choices by the designers. It has features of a high altitude interceptor, maneuverable dogfighter, and effort was made towards reducing the RCS when compared to a typical Russian 4th gen fighter – particularly looking at it head on. The patent filed acknowledges that the core requirements were a contradiction (that never happens in acquisition programs!), therefore the aircraft is inherently a compromise. The fighter features maneuverability at high angles of attack, great aerodynamic performance at supersonic speeds, and good aerodynamic performance at subsonic speeds, supercruise in the final engine, an internal bay capable of large payloads, and a substantially reduced radar cross section probably in the .1-.3m² range.

To stealth or not to stealth?

Disclaimer: Here we start to enter swampy waters. I’m not an engineer and can only discuss this topic in layman’s terms. I’m happy to be yelled at by actual engineers or people from the aerospace industry.

The Su-57 features a substantially reduced radar cross section compared to a typical Russian 4th generation aircraft, but this is a somewhat abstract way to discuss the subject. When we think about having low observation qualities or a small radar cross section (RCS) we are thinking about detection and engagement ranges from a particular type of radar, at a select band, and aspect. An aircraft could have a small RCS in m² when looking at it head on, but become rather visible from the rear aspect, sides, or when looking at it from below via ground based radar. It could have a tiny RCS to a X-band fire control radar, but be clearly visible to a VHF radar employing a wavelength of 1 meter or longer. A more technical paper, for example this one, explains the subject reasonably well:

The same logic applies to any kind of radar. However, concerning fighter aircraft radars, as well as air-to-air missile seeker radars, the respective ranges are considerably shorter compared to the ones of a ground radar.

In theory, the RCS of some simple objects, such as a perfect sphere, can be well defined. In practice, most targets are rather complex objects and their RCS usually fluctuates considerably, as they move with respect to a radar.”

Some commentators see the Su-57s design as a the wrong approach, unable to replicate a F-22 or F-35. As a consequence the design choice is misattributed to Russian inability to design a stealth aircraft, or some innate deficiency in the aerospace sector, for the simple reason that it’s inconceivable Russians might understand all the same things about modern air combat, and pursue a different design philosophy. This is mirror imaging. The Su-57 is not the result of a failure to execute.

There are significant gaps in industrial capacity between the U.S. and Russian aerospace sector, materials, precision molds, additive processing, electron beam welding, yielding tight tolerances etc., but this is not the primary input into the Su-57 design. 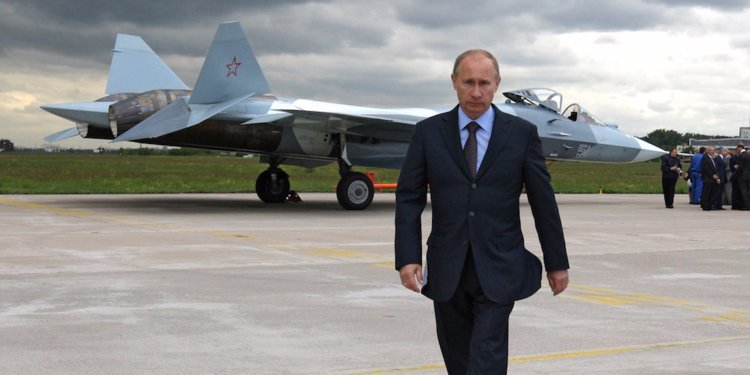 The U.S. has placed most of its 5th gen eggs into the basket of stealth optimized platforms meant for beyond visual range combat, air defense penetration, and offensive counter air (if I’m wrong please yell at me).

A substantial amount of money has been invested in this philosophy. The Chinese have to a large extent copied these designs, because that’s what they do. Russians think differently about stealth and the role of tactical air power in general. It is there to be one element of an integrated air defense network, and to support the ground force at the tactical-operational level, not to conduct aerospace blitzkrieg. Despite having access to all the same information on stealth, they developed different requirements for the aircraft.

As a General Staff dominated by combined arms officers they might have set the wrong requirements, but the cause is not an inability to grasp how stealth works, or build an airframe that reduces the RCS to fire control radars. Russia’s aerospace sector also knows how to make good airframes, though not with the same tolerances, close fits, or materials.

Even though the U.S. is about as dominant as it gets for an aerospace power, it’s important to remember we exercise analytical humility in looking at why other countries may choose a different design, based on the context of how they see air defense and their requirements. The fighter will allow Russia to attain qualitative air superiority over a 4th generation air force, and work with its own integrated air defense to counter penetrating stealth aircraft.

It is a reflection of the Russian philosophical approach to the tactical aviation component of its Aerospace Forces (VKS), intended to support the strategic air defense mission first, and engage in standoff strike as part of offensive aerospace operations.

The Su-57 also reflects Russian skepticism on the money and effort that should be invested into stealth optimization and reduced RCS, representing what one could call the ‘good enough’ solution to the overall air superiority problem.

Maybe that’s a mistake, and they should have just cloned the F-22 to the best extent possible, but the F-22 and F-35 work in part because they belong to a large infrastructure of logistics, stacks of ISR, and all the pieces that make the U.S. succeed as an expeditionary aerospace power.

Russia is primarily a land force, where the other services provide support at tactical-operational levels to a strategic land campaign in the theater of military operations. An F-22 clone seems somewhat overkill for that mission, and a F-35 clone makes no sense at all for an air force that has no need to operate within integrated enemy air defenses.