#StayAtHome Is Murder. Getting Infected Is the Only Way Out of This — Precisely What They’re Keeping Us From

The Covid Rouge are shifting goalposts. We were told the shutdowns and lockdowns were necessary to “flatten the curve”. The danger we were told, was not that COVID would kill millions outright, but that because so many of those infected would require hospitalization and ventilators that hospitals would become overwhelmed and could not offer help to those who could have otherwise been saved.

So — we were told — what we needed to do was sacrifice by staying inside to reduce the rate of transmission. If we did so maybe, just maybe we would be able to “flatten the curve” just enough that most of those who needed professional help in care centers would receive it.

This approach was thought up on the basis of a few key presumptions which have since proven extraordinarily outrageously wrong such as that COVID-19 hospitalization range was in the neighborhood of 5 or 15 percent. In fact, data now shows fewer than 1 percent of those infected require any professional medical attention at all. (Another assumption was that ventilators made a huge difference in whether patients would be saved which may be exactly the other way around.)

Nonetheless, on the face of it — when one disregards the faulty data that went into it — the “flatten the curve” approach at least made sense in principle.

But what we’re doing is no longer “flattening the curve”. Almost everywhere in the world hospitals are nowhere close to being overwhelmed. Even in New York City as a whole — one of the epicenters of the outbreak (the only US state so far where influenza-like illness deaths for this year are above average rather than below) — there is tons of spare capacity and medical centers are nowhere near the breaking point.

Yet everywhere every single uptick in the number of infected, no matter how small, is being treated as a sign that the sky is falling. In other places we’re seeing even more ridiculous things like countries and states locking down over a dozen or fewer deaths, or in the case of Cambodia something as cretinous as locking down before a single COVID-positive death.

None of this may be justified under the call to “flatten the curve”. The curve is flat enough, with room to spare.

"Flattening the curve" was meant to relieve pressure on the health care system, not cut the # of people who succumb. Why is North Carolina locked down, then, when no projection shows them anywhere near running low on hospital space? I guess I'm a "denialist" to want consistency.

If anything with the consistent application of the “flatten the curve” approach, restrictions ought to be thoughtfully eased now so as to allow transmission rates to climb up again and not unnecessarily drag this extraordinarily damaging and traumatic episode. There is hospital capacity to spare, so why aren’t we?

Instead we have Bill Gates pontificating that for as long as a vaccine doesn’t come out in 2021 or 2022 — but definitely no sooner than 18 months from now — life should not be allowed to return to normal. Only once Bill Gates and his Big Pharma buddies have injected us with their patented concoction, that they’re going to charge our nations steeply for, can our lives and civilizations be allowed to shift back into normal gear.

What exactly do we think we are accomplishing by keeping young, healthy people away from a viral infection that poses no threat to them at the barrel of a gun, and at unfathomable damage to all of our livelihoods?

The logic of vaccination is that individuals who are healthy enough that it poses no risk to them are vaccinated and gain immunity that protects also those who are too frail to risk getting injected with the vaccine.

This is (allegedly*) the reason anti-vaxxers are so relentlessly demonized. It is said that by refusing to get vaccinated when they are otherwise healthy, they selfishly and irrationally threaten and undermine our common herd immunity.

Okay. So why then is in this case, everything being done to prevent healthy people, to whom the virus poses no threat, from going out and inoculating themselves the natural way — by becoming infected and developing antibodies naturally?

Why is it that in one case rejecting (the usually) harmless inoculation by a vaccine is demonized as irrational anti-science, but in the other police will be deployed to prevent you from receiving the inoculation dose naturally? (Remember 80 percent don’t even develop symptoms.)

Why are people who venture outside and risk contracting and harmlessly shaking off the infection while building up our common immunity demonized, hunted down, and snitched on? We are nowhere near our hospital capacity so what is wrong with going out and handling this thing like we handle every other influenza-like coronavirus out there? (Ie without flinching or fussing.)

In fact if you are under 50, are reasonably healthy, and do not live together with anyone your senior, sheltering-in-place is the most selfish thing you could be doing right now. You should go out and risk exposure to the virus so that those truly vulnerable to it do not ever have to.

Instead, hunkering down in rolls of toilet paper and the idiotic prancing around on balconies is held up as virtue and civic duty, instead of the frightened, irrational and counter-productive acts of excitable simpletons that they are. 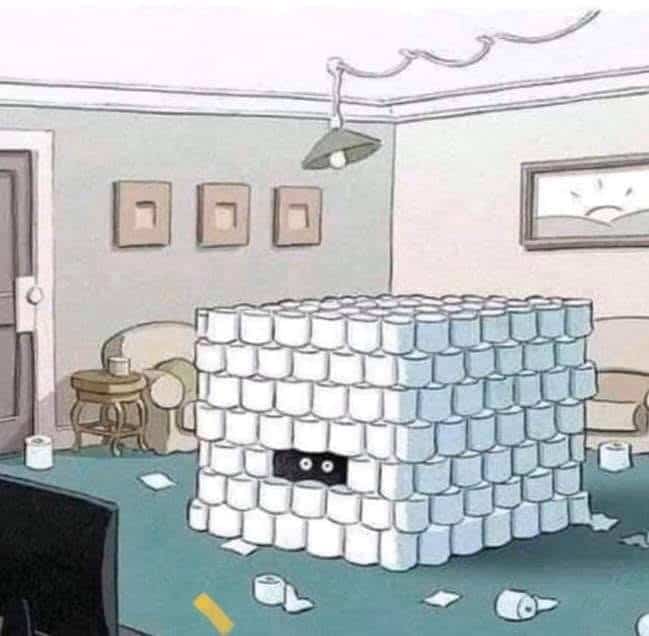 We are now ruled by a mob of champagne-sipping virtue signalers, hysterical housewives, and aimless couch potatoes too stupid to notice they’ve taken the anti-anti-vaxxing logic and turned it on its head.

Yeah, let’s demonize and snitch on anyone going out for a second walk so that we can stretch out the stone-age-bringing lockdowns to 18 months to allow Epstein’s pal, Bill Gates to posture as our savior as he graduates from starring in educational videos teaching us to wash our hands to delivering a multi-billion medicine (and a biometric-digital ID).

I don’t know about you, but as a life-long user of Windows I feel if you want to get injected with whatever concoction Bill Gates comes up with you like to live more dangerously than I. While in principle vaccines are the best thing after sliced bread, in this case I’ll gladly take my chances with a coronavirus instead. And if you care about society (and are under 50) then so should you.

* Of course, anti-vaxxers being such a small proportion of the population their effect on our herd immunity is negligible, and the true source of the relentless contempt for them is that it allows those of painfully average mental capacities but who have received some indoctrination in institutions of schooling to imagine themselves as extraordinarily sophisticated by comparison.

The Flat Curve Society
14 Comments
Leave A Reply
Cancel Reply
Telegram Group
AE has a supporting readers Telegram group where we hang out and exchange leads and takes. If you have ever donated to AE drop me a line on email and I'll send you the link to join.
Anti-Bellum
Antiwar.com
Brownstone Institute
Edward Slavsquat
Fourth World
Swiss Policy Research
The New Kremlin Stooge
Read the rules before you think about leaving a message
Anti-Empire