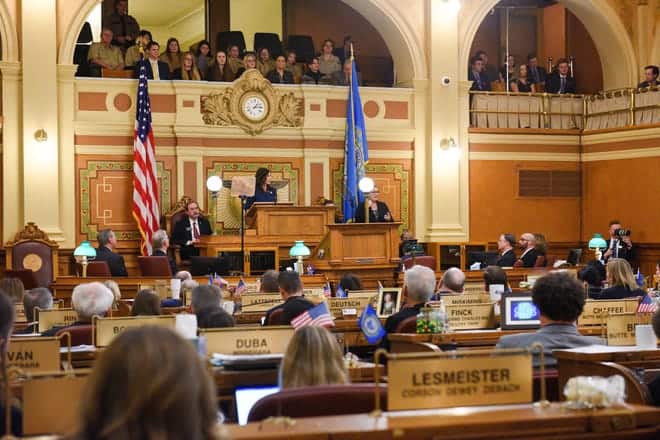 South Dakota’s Republican-controlled House is introducing legislation that would allow the state to nullify President Biden’s executive orders if it determines they are unconstitutional.

The bill sets up a process for reviewing the president’s executive orders, which would be submitted to the governor and attorney general so that the attorney general could “determine whether the state should seek an exemption” from the order or have it “declared an unconstitutional exercise of legislative authority by the President.”

The bill targets orders that would “restrict a person’s rights,” specifically pointing to orders related to a “pandemic or other public health emergency” and “the regulation of the constitutional right to keep and bear arms,” among other topics.

South Dakota has frequently stood out from national and state governments amid the coronavirus pandemic, with Gov. Kristi Noem opting for a more relaxed public health approach that resisted strict lockdowns and mask mandates.

“South Dakota is not New York City,” Noem said of her approach. “Our sense of personal responsibility, our resiliency and our already sparse population density put us in a great position to manage the spread of this virus without needing to resort to some of the measures we’ve seen in some of these major cities, coastal cities and other countries.”

Biden has set a record-shattering pace for executive orders in the first few weeks of his presidency, many of which have been aimed at curbing the yearlong pandemic.

Noem’s office did not immediately respond to the Washington Examiner’s request for comment on whether the governor was aware of or planned on signing the new legislation.