So Bad It’s Good: The Flood of FSB Fakery Deserves an Oscar

Fake to the bone. FSB and White Helmets should get a room together 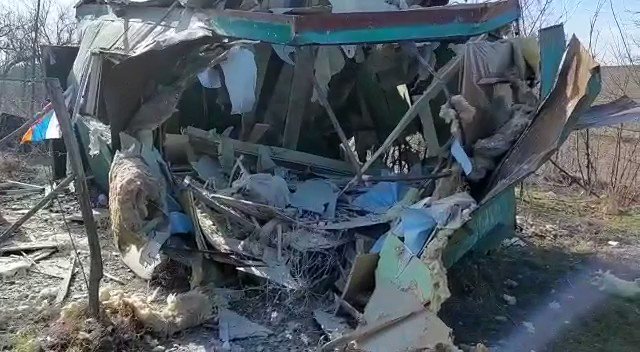 So much fake. This thing is supposed to be an FSB border post in Great Russia that got blown up by the dastardly Little Russians:

Yes the FSB would like you to believe that they live as wilderness hobos: 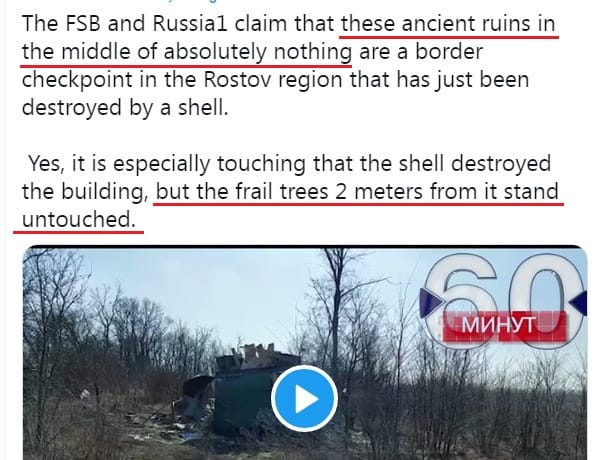 Then there was the fake car bomb:

#Russia #Ukraine
Explosives experts of the #LPR destroyed a car bomb with the help of controlled detonation. The explosive laden car was found today on the route of evacuation buses with civilians.#Donbass pic.twitter.com/eKJGnMGqd7

Until the February 19 announcement, nobody even knew there would be an evacuation. Yet just 24 hours later the Little Russians had already everything set up to bomb them with 200 kilos (!) of explosives. And why?

In eight years Little Russians haven’t car bombed civilian buses once. Why would they pick a moment when Great Russia assembled 100-120 battlegroups on the border to start?

This would be ISIS-level perfidy and nihilism. What could they possibly gain from it?

In yet another coincidence the Lada bomb was discovered in the nick of time by the ultra-competent LPR militia. (And then blown up. Once again it’s the cheapest possible car that gets blown up.)

WARNING — VERY, VERY GRAPHIC CONTENT: Video shows the civilian miner we reported about earlier — who was killed by Ukrainian artillery as he was on his way to work in the morning —pic.twitter.com/mrgJJW0dl7

Will the man be identified? Will there be an interview with his grieving family? None so far.

I’ll give good odds on this man being a homeless guy the FSB picked up from a morgue in Rostov and dressed up as a “miner”.

To top it all off the FSB claims it successfully (with the help of the army) fought off 5 Little Russian commandos who entered — not Donbass — but Great Russia herself. As well as 2 BMPs allegedly sent to extract the commandos under fire. The FSB accomplished this without any losses on the Great Russian side whatsoever. The 5 commandos were “killed” but no word on the fate of the BMP crews. (Guess their scriptwriter is paid by the word.) Also no word on why the Little Russians would send in what are “fighting vehicles of the infantry” without the infantry.

FSB is not able to present any bodies, and no interviews with any of the “participants”:

Multiple such tributes to the White Helmets are released daily. Thus what FSB’s creations lack up in production value they make for in quantity. It’s almost pointless to studiously research them because in the meantime the FSB creativity department will have crapped out half a dozen more.

It’s almost as if the FSB content creators are competing who can get approval for a less convincing, more 4Chan-inspired fake.

More news today Russia is preparing to show evidence of mass graves in Luhansk / Donetsk. So I’m retweeting this. There *is* evidence—because there *were* mass burials. The Russian-backed authorities helped organise it. They didn’t have choice. Bodies were decomposing w/o electr https://t.co/1OIgGqDCM4

Some have come with a name for this genre — “Kosplay”:

Some Russian observers have mentioned that Putin may be planning to pattern operations closely on NATO’s 1999 campaign against Yugoslavia over Kosovo. Early steps seem to confirm this: Putin’s use of ‘genocide’ plus the creation of a ‘refugee crisis’ by removing Donbas citizens.

In this Russian Kosplay scenario, ground forces would move into the Donbas to drive back Ukrainian forces ‘avert the risk of genocide’ and might even use ‘peace-keeping’ tactic deployed in other post-Soviet interventions.

By mirroring the tactics plus messages employed by NATO in 1999 the Kremlin might hope not just to troll the western alliance on a historical scale, and underline the aggressive character of NATO seen from Moscow, but to maintain that its actions were justified by precedent.

Having brutally shelled the tractor road and the shed (we will always remember them 🕯️), the blood-lusted and deranged Banderites are now directly attacking Russia with special forces. https://t.co/GgTDTXYdsm

Meanwhile, even Kommersant, the country’s most boring paper had to notice that people in Donbass don’t at all feel under any kind of extraordinary Little Russian pressure. To the contrary:

“Our school collects lists of those wishing to evacuate, but I know that there are very few people there,” says teacher Alina. “We offer parents of students to sign up with teachers in order to go all together, but in parental chats there is a complete refusal.”

The man, who introduces himself as Alexander, says he does not believe the news. “Everything is being done to force the population to leave, but few people want to, so “saboteurs” and “mining” were invented. It turns out that Ukrainian sabotage groups move freely in our city, doing whatever they want.” In his opinion, what is happening is in the hands of local leaders who are interested in long service to Moscow and personal enrichment.

“Now social networks are making posts with the hashtag #I_stay_to_live,” says Viktoria from Donetsk. Of Victoria’s acquaintances, only two people have been evacuated so far.

All of a sudden Little Russians can’t help themselves but try to break into Great Russia:

Funny how they waited for the Great Russians to amass 100-120 battalion tactical groups to start violating the Great Russian border. I know it sounds fishy, but Russia’s chief spook confirms it. And if you can no longer trust a career spook, then what’s the world coming to?