So, Admiral McRaven Just Called for a Military Coup, Kinda

Laying the groundwork to normalize the idea of one

He begins with something to get the blood up, a call to the good military stuff, invoking generals who are “highly decorated, impeccably dressed, cleareyed and strong of character, [yet] were humbled by the moment” at a change of command ceremony. Then a little history, invoking the WWII Office of Strategic Services, the forerunner to today’s CIA and Special Operations community, who had “faith that these values were worth sacrificing everything for.” In case it wasn’t clear, they “personified all that is good and decent and honorable about the American military,” he tells his Op-Ed’s intended audience, that very same military.

Then, invoking that oath that requires the military to protect America against all enemies, foreign and domestic, McRaven explains to them why they may soon again be called to battle: “The America that they believe in was under attack, not from without, but from within.” This is not subtle. McRaven wants everyone down to the newest private to get the message Lima Charlie (Loud and Clear.)

McRaven continues “These men and women, of all political persuasions, have seen the assaults on our institutions: on the intelligence and law enforcement community, the State Department and the press. They have seen our leaders stand beside despots and strongmen, preferring their government narrative to our own. They have seen us abandon our allies and have heard the shouts of betrayal from the battlefield. As I stood on the parade field at Fort Bragg, one retired four-star general, grabbed my arm, shook me and shouted, ‘I don’t like the Democrats, but Trump is destroying the Republic!’”

Quick Summary: The president is destroying the Republic, from within. The last folks who wanted to destroy the Republic were the Nazis, the Commies, and the terrorists, and you know what we did to them. 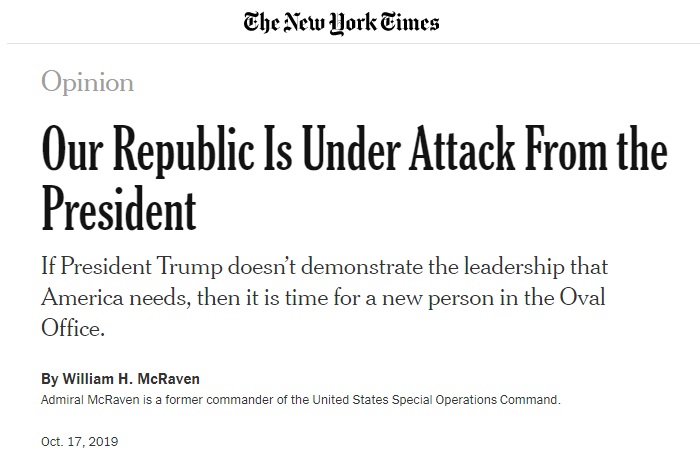 McRaven’s next step is reassuring the troops that whomever they are next ordered to kill, it is all for a good cause. “We are the most powerful nation in the world because we try to be the good guys. We are the most powerful nation in the world because our ideals of universal freedom and equality have been backed up by our belief that we were champions of justice, the protectors of the less fortunate.” That leaves aside the silliness of such a statement in light of what hell the American pursuit of justice has wrought among the millions dead in Iran, Iraq, Syria, Afghanistan, Yemen, Libya, and Somalia, never mind in an earlier century across Southeast Asia and the Americas. This is not about that. This is about dehumanizing the next enemy, who may look alot like you this time McRaven is hinting, to convince his shooters they are killing for freedom.

Finally, what this is really about. You guys need to be ready to take out Trump.

Here are McRaven’s words: “If this president doesn’t demonstrate the leadership that America needs, both domestically and abroad, then it is time for a new person in the Oval Office — Republican, Democrat or independent — the sooner, the better. The fate of our Republic depends upon it.”

Now everyone knows the election where Americans get to choose the next president is a year from now, no sooner. A generous soul, reading McRaven’s sentence in isolation would say that bit about “the sooner the better” maybe means he is hoping for impeachment to supersede the election, you know, get Trump out sooner without the risk and muss of allowing The People a say in it all. That’s certainly what McRaven would claim, perhaps with a wink at Jake Tapper this Sunday across the desk. But take this Op-Ed and reimagine something similar being said by a displeased colonel in the Turkish or Iranian army, or what as an intelligence officer yourself you’d be reporting about it from Moscow if it was said to you by a prominent Russian former general with deep personal loyalties into his former special operations forces at a time when a CIA officer (“the whistleblower”) is the driver behind an active impeachment process.

Sure, McRaven is not ordering Seal Team Six into action today. But go ahead, convince yourself he isn’t laying the groundwork, or at least trying to remind people he could. In case you believe I am being overwrought, here’s what Tom Nichols of the Naval War College said: “I don’t think it’s possible to overstate the importance of a retired four-star writing this piece right now. This is a watershed in American civil-military relations.” Nichols may have meant that as a good thing, but it is not.

The frightening thing is McRaven’s literal call to arms does not occur in a vacuum. Once intelligent people are talking about actual civil war in America. This began after Trump retweeted a pastor saying impeachment would cause a “civil war-like fracture in this Nation.” Never mind that it was a retweet, and never mind that the original statement used “like” to make a comparison. The next headline was set: Trump Threatens Civil War If He’s Impeached. Another headline asked: “If Trump’s Rage Brings Civil War, Where Will the Military Stand?”

This tracks with the meme that Trump will refuse to leave office if defeated in 2020, or will declare himself the winner even if he loses. “Trump Is Going to Burn Down Everything and Everyone,” reads the headline from a NASDAQ-listed media outlet. “Before Trump will allow himself to be chased from the temple, he’ll bring it down,” wrote Charles Blow in The New York Times.

That’s just what the MSM is saying; it gets worse the further off the road you drive. “Trump is going to try everything, Fox is going to try everything, and they’re going to both further the injuring of societal reality and inspire dangerous individuals to kill and maim,” Jared Yates Sexton, a well-known academic, tweeted on September 28. “There’s a vast number of people in this, people who have been taught their whole lives that they might need to kill in case of a coup or corrupt takeover,” he continued. “Trump and Republicans signal to them constantly. They’re more than ready to see this as the occasion.” And of course this all festers alongside the relentless prattle from doctors who have never been inside the same zip code as their patient declaring the president, custodian of the nuclear codes, mentally ill, a danger to himself and others.

That’s a nation McRaven feels might need to call on its military to intervene. Don’t dismiss this Op-Ed too quickly. Consider it instead… timely.

On  a more personal note, I’ve been fired, accused, hated on by friends and relatives, and deplatformed multiple times for “supporting Trump.” I do not. But I am willing to think past him. It’s the old warning about not throwing the baby out with the bathwater; what we say and do now to get rid of Trump will survive him, and become part of the political lexicon forever. Impeach a president still widely supported by the American people three years into his term over a phone call? Sure, seems OK. Tolerate calls for violence, veiled threats of a coup in our largest newspaper? Constantly call the president dangerously mentally ill, a literal nutcase who should be institutionalized? That’s how to operate a democracy?

And spare me the idea that Trump is not widely supported, with his low approval ratings. President Obama’s 11th quarter in office, October 2011 same now as Trump, was the worst of his administration, based on his quarterly average job approval ratings. His 41% approval average is down six percentage points from his 10th quarter in office, and is nearly four points below his previous low of 45% during his seventh quarter.