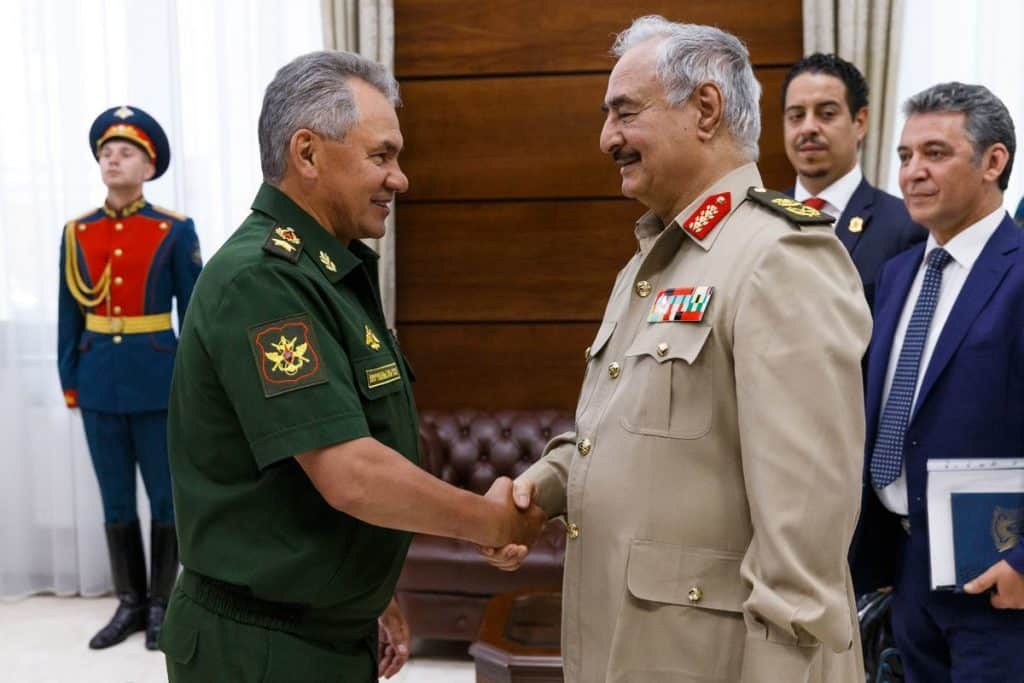 Editor’s note: Russia has a small stake in ensuring Libya isn’t home to ISIS or al-Qaeda. Other than that Russia has mainly involved itself with Libya to guard from the isolation campaign Obama was pushing, by making sure the Europeans have no choice but to engage with Moscow if they want Libya solved. Now however Libya has also become useful as a lever vs Erdogan. A Shoigu-Haftar meeting is a useful reminder to the Turkish leader that if he goes to far in Syria, Russia can in turn make things much more difficult for him in Libya

“During the meeting, security issues in the Middle East and North Africa as well as the fight against international terrorism and settlement of the crisis in Libya were discussed,” the Russian Defense Ministry stated. “The important role of negotiations held on Jan. 13, 2020, in Moscow in establishing the cease-fire and launching the normalization process in the country was noted.”

The statement also stressed that the two parties reiterated their respective commitments to a political solution to the conflict.

WHY IT MATTERS: Shoigu has met with Hifter on a number of occasions, including in November 2018 and August 2017. In January 2017, Hifter spoke with Shoigu via a videoconference onboard the Russian carrier “Admiral Kuznetsov,” which, at the time, was positioned off the Libyan coast.

This time the meeting came the day after the LNA attacked the port in Tripoli. The LNA claims it was targeting a storage place for ammunition and the Turkish vessel that allegedly transported arms to the forces of the Government of National Accord (GNA) led by Fayez al-Sarraj.

STRETCHING THE FRONT: The meeting also came amid escalations between Russia and Turkey over Syria’s Idlib region. The latest round of the showdown saw Russia-backed Syrian airstrikes on opposition forces that killed two Turkish servicemen. Moscow later accused Turkey of providing artillery support to militants fighting the Syrian army and said militants briefly broke through Syrian military positions in Idlib. Turkish Defense Minister Hulusi Akar told CNN that Ankara would “no doubt” employ the S-400 missile systems, which it purchased from Russia. He also said Turkey is in talks with the United States over the transfer of Patriot missiles to be used in Idlib to defend Turkish troops against Syrian army attacks.

Russia’s recent moves over Libya suggest the Astana 2.0 deal that Vladimir Putin and Recep Tayyip Erdogan eyed for Libya in early January is in hibernation, at best, and Moscow may be seeking leverage over Ankara, including in Libya. Earlier this month, Russia’s Foreign Intelligence Service chief Sergey Naryshkin traveled to the United Arab Emirates for talks with the Emirati leadership.

WHAT’S NEXT? The UN has tried to salvage talks over a cease-fire for Libya after the Tripoli-based GNA announced it was pulling out in response to the shelling of the capital’s port by Hifter’s forces.

A source close to the Russian Defense Ministry told the Russian Vedomosti newspaper that Hifter has proven a tough negotiator for Moscow.

“Hifter says he is all for political settlement, but once some practical steps needed [on his side] he would either decline to sign papers or would ask for time to think them over and would then disappear,” the source stated.

“There haven’t been such issues with Sarraj this far, he is under Erdogan’s full control. In this sense, Hifter is not under anyone’s control. Talks with Shoigu may bring about the effect needed for a temporary truce.”

The question is, given the ongoing tensions in Idlib, would Russia really promote a truce, or would it use the Libyan track to put more pressure on Turkey

10 Comments
Leave A Reply
Cancel Reply
Telegram Group
AE has a supporting readers Telegram group where we hang out and exchange leads and takes. If you have ever donated to AE drop me a line on email and I'll send you the link to join.
Anti-Bellum
Antiwar.com
Brownstone Institute
Edward Slavsquat
Fourth World
Swiss Policy Research
The New Kremlin Stooge
Read the rules before you think about leaving a message
Anti-Empire