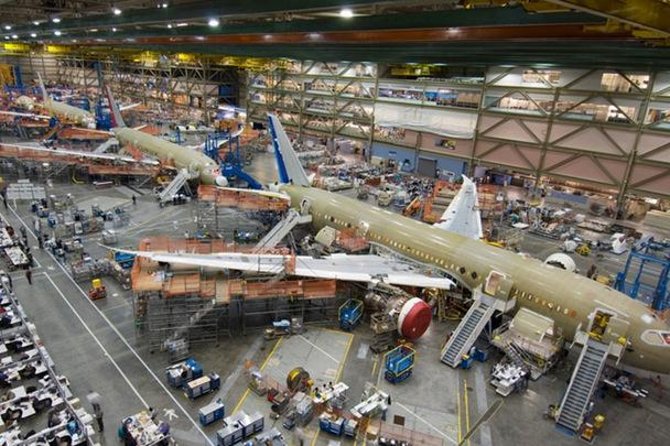 The cancellation, first reported by the Seattle Times and buried in Boeing’s monthly order release, is the final step in unwinding an order that had been shrouded in uncertainty ever since the airline said in 2015 it no longer needed the planes.

But the lost business theoretically knocks a hole in the production profile for the 787 Dreamliner after the world’s largest planemaker increased its build-rate to 14 aircraft per month from 12 at twin U.S. factories.

Barring new orders, Boeing faces the growing possibility that it may have to cut production back by 2022, industry sources say, piling on new pressure as the grounding of the smaller 737 MAX stretches into its eighth month.

One of the sources, who closely monitors Boeing’s production plans, said the planemaker has dozens of unsold or potentially vacant 787 positions on its production line in 2022.

The actual number of unfilled production slots depends on assessments about the ability of airlines to take delivery as promised, a subjective guess that planemakers keep confidential.

While demand for the narrowbody aircraft that dominate most fleets remains strong, demand for larger, long-haul aircraft like the 787 and Airbus (AIR.PA) A330 and A350 has weakened.

Boeing won most of the widebody orders so far this year but neither planemaker is selling as many aircraft as it would like amid trade tensions, concerns over the global economy and the increased ability of smaller narrowbodies to fly long distances.

Boeing Chief Executive Dennis Muilenburg told a conference last month that Boeing is closely tracking “macro risk areas,” and had reserved slots on its 777 and 787 production lines for Chinese orders that have been held back by the U.S.-China trade war.

“There is dependency there on Chinese orders ultimately coming through,” Muilenburg said.

The comments surprised some suppliers because planemakers typically raise output only after selling aircraft rather than opening the taps in the hope of winning orders later – though a strategic buyer like China might expect special treatment.

Boeing remains under pressure to reduce an overhang of deferred accounting costs on the 787 by producing more units.

European rival Airbus also has gaps in its production profile for widebody jets, especially the upgraded A330neo and to a lesser extent the newer A350, other industry sources said.

The lull in widebody orders has also raised questions about jetliner pricing. Multiple industry sources say aircraft are being offered at unusually steep discounts, something that officials at both planemakers deny.

Aeroflot is keeping busy these days when it comes to sprucing up its fleet. The Russian flag carrier has cancelled its long-standing order for 22 Boeing 787 Dreamliners, as the airline awaits the arrival of its all-new Airbus A350XWB wide-body aircraft next year. The move will present another blow to Boeing, as the company seeks new business for the 787 in order to avoid future production rates cut.

Aeroflot finalized an order for 22 Boeing 787 aircraft in September 2007, in a push to upgrade its wide-body fleet. At the time, the Dreamliners were meant to be “a tool for profitability” for the Russian airline according to a statement by Boeing. Fast track to fall of 2019 and the order, which originally included only 787-8s, but has reportedly been revised to 18 787s and four 787-9s, has been cancelled. Originally valued at $3.6 billion at list prices, today the deal would be worth around $5.6 billion according to current list prices.

Aeroflot’s wide-body fleet consists of Boeing 777-300ER as well as Airbus A330-200s and A330-300s. The airline first ordered the Boeing 777 in 2011 and, to date, has 19 of the 777-300ERs in operation with another three on order from the U.S. manufacturer. Of its Airbus wide-bodies, Aeroflot operates 22 A330 jetliners, the average age of these being 8.8 years – the oldest compared to other aircraft types the airline flies, planespotters.net data shows. The average age of the carrier’s entire fleet, which includes 249 passenger planes (as of October 1, 2019) is 4.8 years, the company states.

As the Russian flag carrier is now preparing to introduce the A350XWB at the beginning of 2020, it has begun phasing out its A330 airliners. The airline has already stored the first (VQ-BCQ) of three A330-300s expected to exit its fleet by the end of 2019. With the retirement of the A330s, the company is making room for a new aircraft type: the carrier, has placed a firm order for 14 A350-900 jets, as Airbus latest orders and deliveries figures (as of September 30, 2019) indicate.

Earlier this year, Aeroflot received formal approval by the Russian government to acquire up to 100 Boeing and Airbus aircraft, to be delivered from 2019 to 2023. Having gotten the green light, so far the state-owned airline seems to be more keen on the Airbus aircraft and not just wide-bodies. Aeroflot has been working on adding nine A320neo Family jets: tenders launched in July, 2019, include leasing six A320neo and three A321neo jets for a 12 year-term with deliveries scheduled for 2020.

According to Interfax, the carrier is set to announce another round of tenders, this time for 23 aircraft – eight A321neos and 15 A320neos – on 12-year operating leases, in a deal valued at $1.64 billion. Deliveries of these aircraft are expected to begin in 2021. It is about time for Aeroflot to add the “neo”: the national carrier operates 34 A321s and 78 A320s – all in the older “ceo” version. The airline’s narrow-body fleet also includes 47 Boeing 737-800 jets.

For Boeing, the changes that the Russian carrier is making to its fleet and the cancellation of the Boeing 787 Dreamliner order will not come as positive news. According to The Seattle Times, the U.S. manufacturer has increased its 787 production rate to 14 planes per month between its two Dreamliner plants in Everett, Washington, and in North Charleston, South Carolina. But it now faces the possibility of having to cut the build-rate back by 2022, as the Dreamliner backlog shrinks, currently standing at 529 aircraft. Maintaining the set production rate is crucial while the company hemorrhages cash due to the grounding of the 737 MAX.

Boeing released on October 8, 2019, its third quarter delivery report, showing it has delivered 35 787s during the period, down by seven compared to the second quarter. Making up for more than half of the total of 63 aircraft deliveries in the third quarter, the 787 is now clearly the primary revenue stream for the U.S. manufacturer. The total order book for the Dreamliner through September 2019, stands at 1,450 jets, of which 894 have been delivered.