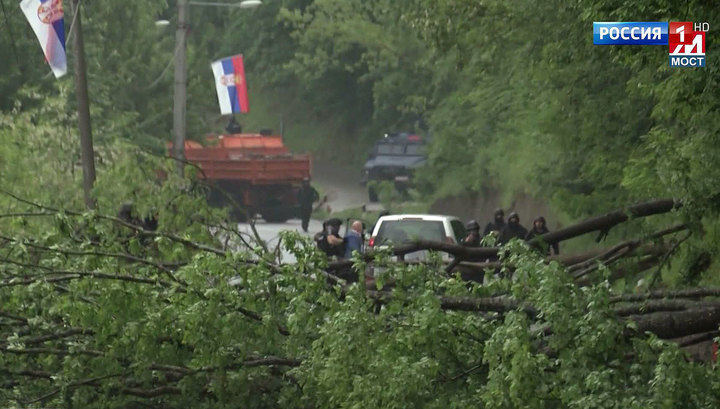 Militarized police of the NATO-backed Albanian government in Prishtina forced its way into the Serb-majority northern Kosovo last week (where Prishtina has no permanent institutional presence and remains unrecognized by the population who continue to recognize the sovereignty of Serbia) and arrested 25 Serbs and one Russian diplomat working for the UN.

The video shown on local Serbian and then Russian national TV shows the Russian diplomat being slammed against the car as he is grabbed by the Albanians. He is now recovering form the injuries in Belgrade.

The arrest and beating of UN staffer who enjoys diplomatic immunity testifies to a climate of utter lawlessness in the territory, Maria Zakharova said

Russia will press for punishing all those responsible for beating up Russian national Mikhail Krasnoshchekov, a staffer of the UN mission in Kosovo, Russian Foreign Ministry spokeswoman Maria Zakharova told a news briefing on Wednesday.

“The arrest and beating of a Russian citizen, UN staffer who enjoys diplomatic immunity, testifies to a climate of utter lawlessness in the territory, absolute defiance of international law and rules of civilized international contacts. Russia will keep a close watch on progress in the investigation of this incident and press for the punishment of all those responsible along the whole chain of command,” she said.

“It has to be stated that Kosovo is the main source of instability and conflict potential in the region. This territory is practically uncontrollable. It is not just a source of instability, but a potentially dangerous, uncontrolled territory in the center of Europe,” Zakharova said. “We do hope that Pristina’s patrons, who prefer to pursue their own interests, and not the interests of the Balkan countries and peoples, will use their influence to bring the leaders of Kosovo’s Albans to reason. Otherwise, there may follow irreversible consequences.”

In the morning of May 28 unrecognized Kosovo’s police intruded into the territory’s northern municipalities, where two Serbs were slightly injured in shootouts. Serbia’s President Aleksandar Vucic said Kosovo’s police had detained 28 people, including one Russian national, Mikhail Krasnoshchekov, a staffer of the UN mission in Kosovo. Doctor Zlatan Elek, of a hospital in Kosovska Mitrovica, said the Russian had suffered serious head and facial injuries and remained under doctors’ supervision round the clock. A short while later he was transferred to the military medical academy in Belgrade for treatment.