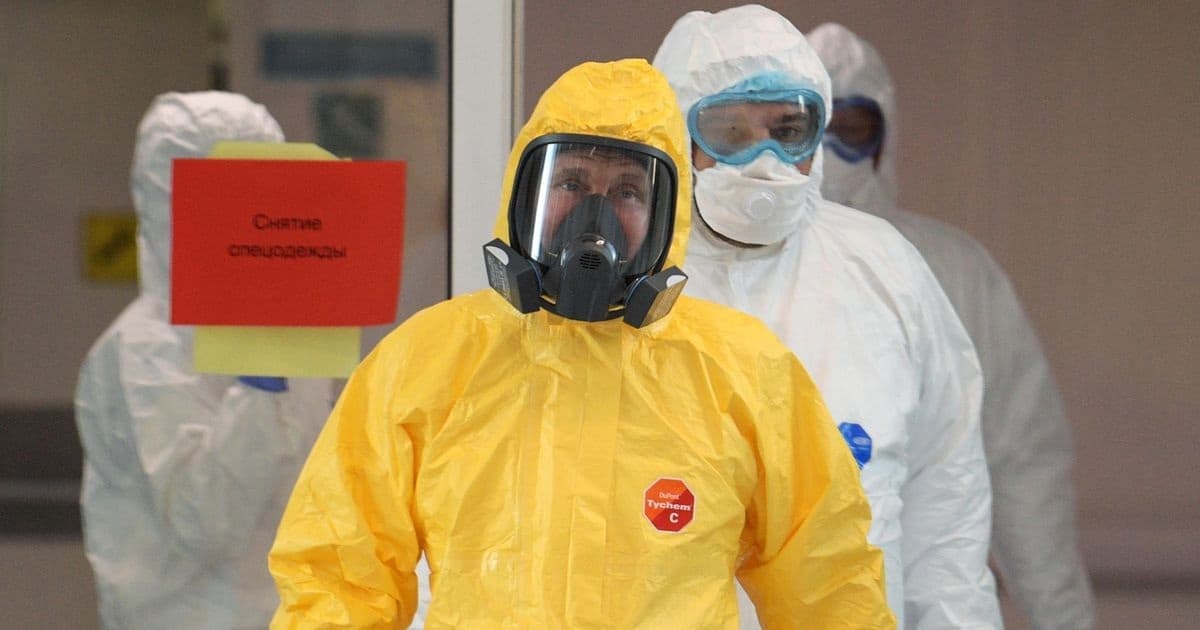 Pavel Volchkov is an exceptional voice among the Russian scientists now dealing with the corona virus (Covid-19) pandemic.

The current Covid-19 policy administrators in Moscow are of the same academic generation but they have trained as doctors;  Volchkov is a geneticist. They have spent their formative careers inside Russian institutions;  Volchkov spent more than ten years in the US, at the University of Chicago then at Harvard.

Volchkov is the head of the Genome Engineering Lab (GEL) in Moscow; it is one of more than fifty laboratories which are part of the Moscow Institute for Physics and Technology (MIPT). The institute is the third-ranked science teaching university in Russia.

Volchkov specializes in the technology known as CRISPR-Cas9. The first acronym stands for clustered regularly interspaced short palindromic repeats; the second for CRISPR-associated complex protein 9; for meaning and diagrams, click to open.  The  purpose of the technology is to engineer or edit genome sequences in living organisms, in the short run for defence against deadly viruses, and in the longer term to remodel medical diagnostics and the treatment of serious diseases; for background, read this.

In this interview, published on July 6 in Izvestia, Volchkov presents the evidence for his  conclusion that a second wave of the Covid-19 pandemic is no longer possible in Moscow because, he argues,  immunity has already reached between 40% and 60% of the population, and continues to grow as rapidly as testing reaches the limit of the city’s population.

The Swedish research paper on T-cell immunity to which Volchkov refers can be read separately here.   According to the authors, “we systematically mapped the functional and phenotypic landscape of SARS-CoV-2-specific T cell responses in a large cohort of unexposed individuals as well as exposed family members and individuals with acute or convalescent COVID-19.” By “large cohort”, the Swedes meant a sample of 208. Within this sample, 31 had mild symptoms of Covid-19 infection but were not hospitalised; another group of 30 were family members exposed to infected individuals but not testing positive or showing symptoms; 80 were selected from voluntary blood donors without Covid-19 testing; 40 had been hospitalised for low-level treatment;  27 required intensive care.

– Pavel Yuryevich, from your point of view, how many people in Moscow already have immunity to SARS-CoV-2?

Recently, an article was published by Swedish scientists who conducted a study of T-cell immunity, the results which I personally have long been waiting for. They analyzed a large number of biological samples by conducting an expensive ELISPOT analysis (Enzyme-Linked ImmunoSpot – T-cell detection method). It turned out that even those who did not have IgG antibodies had T-cell immunity. And there are two to three times more such people in the population than those with antibodies.

– What does this mean?

If in Moscow 20% of people are officially recorded with high titers of IgG antibodies, then you can safely add another 20%-40% to this figure. It turns out that about half of Moscow residents are immune to coronavirus. They will not get sick anymore.

– Recently, articles appeared that showed that antibodies are lost …

And that’s fine. They ought to be lost. This always happens. There is a half-life of IgG, IgM, IgA antibodies. Their volume in the blood begins to fall six months to a year after meeting with the infection. There are so few of them that their number is impossible to detect by any test. What is the purpose of antibodies? Here the virus flew into the respiratory tract, infected a group of cells, created a small local focus (with a mild course of the disease). The immune system recognized these cells and localized them – it is like the city of Wuhan that was closed in China. It turns out that a large number of antibodies do not seem to exist, but the immunity has formed and worked. However, it is concentrated in T- and B-memory cells. When the infection again occurs to a person, the immune system recognizes it, and the cells will begin to produce antibodies.

– Does it make sense then to test for IgG antibodies?

There is. This test is cheap and gives us a cut-off. This cut-off now is 20%. So we can multiply this amount by two to three times. It’s hard to say the exact number;  for this you need to conduct a large-scale study using expensive ELISPOT analysis, as the Swedes did.

– Is it possible to say that the “herd” immunity that everyone has been talking about for so long has already taken shape in Moscow?

For the multi-million city, today’s figures in the region of 700 new infected cases per day indicate that [immunity] has formed.

If we really had only 20% of the residents with immunity, then when we opened restaurants and shops, we would expect a much larger number of infected people.

– But after all, at this figure (700-plus people per day) you can remain for a long time. Or not? What is your prediction?

I think this figure will now begin to decline and will reach zero at the end of August. It is clear that for quite a long time  in the capital there will be cases imported from regions that began to “pick up” the coronavirus relatively late in the day.

– So there won’t be a second wave?

For Moscow, it is already impossible. Now people who have formed natural immunity in the capital are 40%-60%. If the dynamic continues, their number will increase by the end of August to 80%–90%.

– And in other cities of Russia, is the second wave a possibility?

Only in those which are quite isolated, and where there has been an extremely low level of infection. In the big cities, definitely not. If you have already burned the grass, then the burned-out areas cannot catch fire again. Do you know how firefighters fight fire? They take and burn the front of the strip to stop the fire. This strip is our immunity buffer.

– But what about the fact that the virus mutates and the body may simply not recognize it?

In any case, it does not mutate very quickly. Even the seasonal flu virus needs several years to re-infect you. And then in the event that part of its segments — and the flu has eight of them —   will be re-sequenced, that is, replaced by parts from another influenza virus. Coronavirus is single-segment – it cannot change in that way.

– But can it recombine?

Maybe. But this event is much rarer.  It must take at least a couple of years for it to be able to return and cause you some kind of pathology. And still, it won’t be comparable to the first time. Somehow at least the immune system recognizes it, which means it will work. And a secondary immune response will develop.