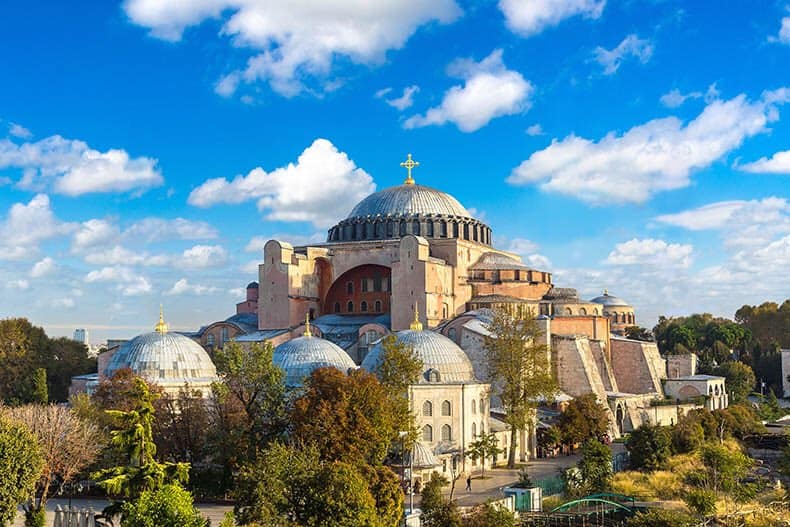 Greece and Turkey are once again at odds over the fate of one of Christendom’s largest and oldest churches, built under Byzantine Emperor Justinian in the 6th century, and surviving changing empires throughout history.

The Church of Hagia Sophia in Istanbul was – prior to the Turkish takeover of Byzantium in 1453 – Constantinople’s most famous church and center of the Orthodox Christian world. Under the modern Turkish state it’s gone from mosque to museum to ‘protected’ UNESCO world heritage site, despite still being considered by Greece and Greek visitors, as well as Russian pilgrims, a church.

But now Turkish President Recep Tayyip Erdogan and lawmakers are eyeing changing its status back to a mosque, which has outraged Athens. Russia has also chimed in, with both the Kremlin and Russian Orthodox Patriarch Kirill condemning any potential move to turn Hagia Sophia into a mosque.

“We by all means hope that Hagia Sophia’s status as a world heritage site will be taken into consideration,” a Kremlin spokesman said Monday.

“Of course, this is a world masterpiece beloved by tourists coming to Turkey from all over the world and especially by tourists from Russia who not only recognize Hagia Sophia’s tourist value but also it’s sacred spiritual value,” he added.

Turkey’s top court is said to still be debating the move. There are still multiple tens of thousands of indigenous Christians in Istanbul and in parts of Anatolia, mostly Greek, Syriac, and and some few remnant Armenian Christians. These ancient communities say Erdogan has newly unleashed a war on Turkey’s Christians.

The Russian Orthodox Church slammed the potential Turkish move as “unacceptable” and a “violation of religious freedom”. The statement said: “We can’t go back to the Middle Ages now” — referencing centuries where Ottoman policy severely suppressed Christians throughout Asia Minor.

The controversy has unleashed a storm on social media, which has included those against turning Hagia Sophia into a mosque envisioning it as a church once again:

The Church of Holy Wisdom pic.twitter.com/rtsByIuEiQ

Erdogan however, has interpreted it as a matter of “asserting Turkey’s sovereignty” over the site. Turkey argues that it can legally do what it wants with monuments and historic places within its sovereign territory.

Mike Pompeo has even weighed in on the side of the Greek government, urging that it be kept as a museum.

“We urge the government of Turkey to continue to maintain the Hagia Sophia as a museum, as an exemplar of its commitment to respect Turkey’s diverse faith traditions and history, and to ensure it remains accessible to all,” the US Secretary of State said within the last weeks.

Erdogan is unlikely to have a pluralist compromise in mind. Humiliating the millions of Christians who see an ancient home in Hagia Sophia may, to him, be a small price to pay—or even a bonus.https://t.co/H2b54Ia11c

Echoing Greek politicians, the leader of the Orthodox Church of Greece, Archbishop Ieronymos II, issued a provocative statement saying of the Turks, “they won’t dare!”

Greek television quoted the top clergyman as saying: “They (the Turks) play whatever games are in hand. This is one more game. I believe they won’t dare.”

Critics of Erdogan and his AKP have long said he and the party have Islamist and neo-Ottoman aspirations. One prominent lawyer and human rights activist with UN Watch commented that:

Turkey now occupies more Arab territories — Syria, Iraq, Libya — than any other country in the world. Yet when the U.N.’s human rights council next week will hold its regular debate on “Occupied Arab Territories,” Turkey’s name won’t be mentioned even once. Isn’t that odd?

Turkey has also lately caused tensions within the NATO alliance, especially over Libya policy and repeat violations of a UN arms embargo.

Turning Hagia Sophia into a mosque after almost a century as a museum would be but one more symbolic provocation, albeit a serious one further worsening Greece-Turkey relations, and risking Moscow’s wrath as well.

Meanwhile, Ecumenical Patriarch Bartholomew of Constantinople – who represents the Orthodox Church and its some 300 million adherents worldwide, is still in residence in Istanbul. He and his predecessors have been barred from using Hagia Sophia as a place of prayer since the 15th century, though over the years there’s been a few provocative instances where Greek clergy were said to have stealthily entered the now museum to “illegally” conduct Christian worship.