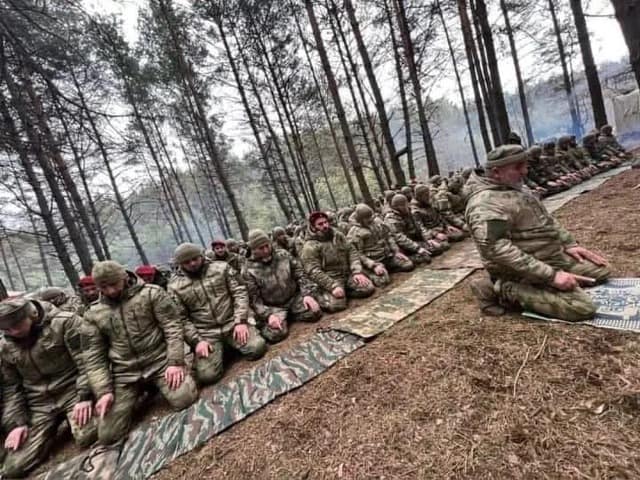 Editor’s note: “Mobilization” is such a red herring. It’s not a question of whether Russia should mobilize hundreds of thousands to form numerous new units.

The question is whether *existing* Russian units should be brought up to the strength that in a war they’re supposed to have.

And the answer is obviously yes they should — if Moscow is actually serious about fighting this war.

Or was Russia plunged into war, but its military simultaneously hamstrung, precisely because the Kremlin is actively seeking Russian humiliation and disaster in Ukraine? It’s hard to tell these days.

In peacetime, Russian brigades are manned at some 75% (of which one-third are conscripts). When war starts their ranks are supposed to be brought to 100% by a small mobilization. This has not happened.

What is more, brigades have been told to leave behind their conscripts. So you don’t even have the ground army attempting to fight the war at peacetime strength, but at even less than that.

A ground army constructed around the assumption it would go to war with X people in its units, only has X/2.

Who has ever started a war, then told the military to CONSIDER ITS NUMBERS REDUCED??

Circling back to Russia’s problem with manpower availability and the question of mobilization. It’s unclear how they can sustain the war without making difficult political choices (and even with). However, general mobilization is the wrong issue to focus on. Thread.

First, I’ll briefly restate the Russian manpower problem. After taking significant losses in the first phase of the war, the Russian military has scrounged the active force for reinforcements, and is largely tapped out in terms of manpower availability.

The reason for this is that the Russian military operates on tiered readiness, with units at 90-70% manning levels. Many towards that 70% mark. In the event of a large war the military assumed manning levels would be raised & conscripts could be deployed.

The force could produce on short notice 2x BTGs from brigades and regiments, the rest was a conscript mix, and units were not fully manned. The available standing force has already been deployed into this war with a number of BTGs out of action due to casualties.

However, without declaring a state of war, or conducting partial mobilization the force is still operating at peacetime strength. Below is one estimate of how a hypothetical brigade with 3,500 personnel may have only a fraction actually available for deployment. 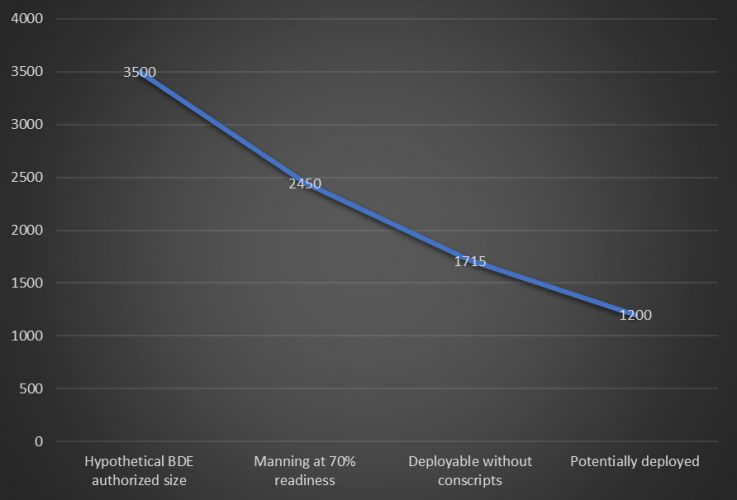 Those figures are in some ways optimistic. They don’t account for the likelihood that there could be a significant difference between actual readiness levels relative to those being reported, and the real situation within Russian BTGs.

I’ve also been guilty of using the term mobilization as a catch-all term for Russian efforts to raise manning levels behind the scenes and prevent soldiers from leaving the force at a time when they are desperately short on available manpower.

The first issue is the status of Putin’s ‘special operation.’ Russia has to either declare a state of war, or procedurally change the rules prohibiting the deployment of conscripts, and the state’s ability to mobilize additional personnel.

As it stands, contract servicemen can try to break their contracts and refuse to deploy. Conscripts are being drafted and demobilized on schedule, and units technically can’t deploy them even though some cheated early in the war and sent mixed conscript formations.

The fastest way for Putin to alter these constraints is also politically the most unpalatable: declare a state of war. It’s clear that for a host of reasons this is something he doesn’t want to do. However, the Russian military effort is also unsustainable as is.

The current Russian approach appears to be halfway measures to muddle through. The Russian military has been trying to raise manning levels behind the scenes by offer of short-term contracts, a few months as opposed to years, and high payouts up to 200-220K RUB per month.

Other steps include enticing reservists to accept contracts, and pressuring conscripts into changing their status, converting them to contract service so that they can be deployed. All of that will get harder as word of casualties and the state of things on the front spreads.

If we consider those who were recently demobilized or just got out of several years contract service, Russia could potentially have access to a significant amount of additional manpower. Right now about 130K+ conscripts with 1 year of service are being demobilized.

I’m skeptical of arguments that these are untrained, or inherently poor quality. It depends. Skills are perishable, but the pool with recent mil experience and training is far from small. The amount of refresh training it will take for it to be useful is worth debating.

If we consider just manpower requirements to replace losses and allow troop rotation to sustain the war then the Russian military does not need hundreds of thousands of troops. This assumes limited war aims, and a lower loss rate than the first month of the war.

Generating additional battalions will take time and probably won’t prove relevant to the offensive in the Donbas, but my point here is that there are things the Russian leadership could try in between ordering general mobilization and doing nothing.

There’s a lot we don’t know about the Russian capacity to train and take in additional personnel right now. How many units pulled in officers and contract servicemen needed for training to fill out their BTGs and replace losses. It’s probably a very uneven situation.

Changing the rules governing force employment and piecemeal efforts to raise manning could extend Russian ability to sustain this conflict. Personally, I think this will only kick the can down the road for Moscow, delaying difficult political decisions.

The notion of mass mobilization strikes me as a distracting conversation. Russia does not have a system to take in, train, and successfully employ a mass mobilized force. However, it is also unnecessary. The question is to what extent can they piecemeal raise manning.

It is quite possible that eventually Moscow will be forced to conduct what constitutes a partial mobilization, whether declared or undeclared. Taken together with changes to laws/regulations, this could provide enough manpower over time to drag the war out. [Surely it wouldn’t just “drag the war out” but also provide Russia the strength to take additional objectives.]

On equipment. Without getting into speculation on what is usable in Russian warehouses, it merits mentioning that several standing Russian formations still have equipment for conscript battalions, and gear intended to be staffed by increased manning i.e. partial mobilization.

All in all, I don’t see general mobilization as technically feasible or likely, hence I suggested this would not be declared on May 9th. A combination of halfway measures won’t dramatically change Russian fortunes either, but they could significantly extend the war.

As it stands, Russian options are shrinking. The more they drag their feet the further their ability to sustain the war deteriorates, and the worse their subsequent options.