Russia Tells Israel Iran Is Not ‘the Problem’ in the Middle East, Israel Is 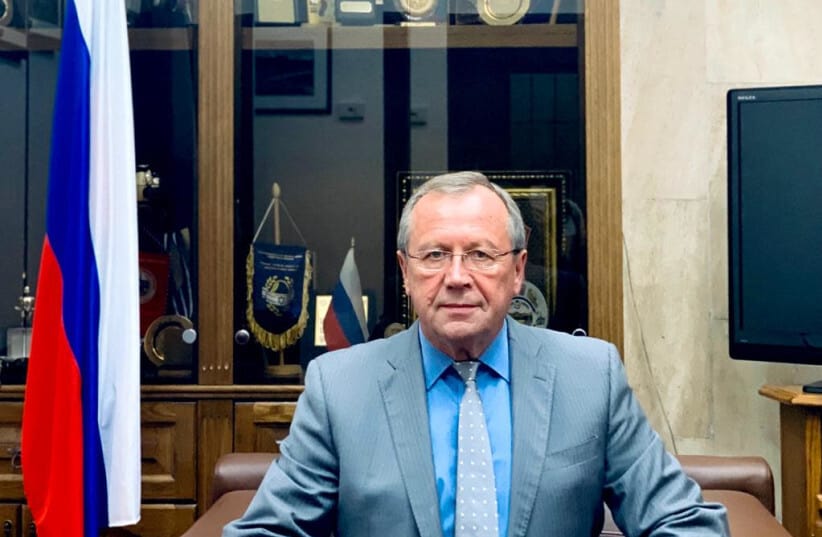 “The problem in the region is not Iranian activities,” Viktorov said at the Russian Embassy in Tel Aviv. “It’s a lack of understanding between countries and noncompliance with UN resolutions in the Israel-Arab and Israel-Palestinian conflict.”

Asked if the relatively limited scope of Israel’s conflict with the Palestinians destabilizes the region more than Iran does through proxies around the Middle East, like the Houthis in Yemen and Hezbollah in Lebanon, Viktorov balked at the notion of Iranian funding the Shi’ite terrorist group.

“Israel is attacking Hezbollah; Hezbollah is not attacking Israel,” he added, referring to Israel bombing Iranian and Hezbollah and weapons convoys in Syria.

Viktorov said he has seen the tunnels from Lebanon into Israel, which Hezbollah operatives have used to attempt to attack Israel, and argued there is “no proof Hezbollah created the tunnels.”

The ambassador said Israel must “not attack the territories of sovereign UN members.”

Asked whether this is a change in the position, by which Israel gives Russia advanced notice before it attacks Iranian positions near the Syria-Israel border, Viktorov said no, because “coordination is about the safety of the Russian military in Syria.”

However, he added, “there is no way that we are approving any Israeli strikes on Syria, never in the past and never in the future.”

With regard to recent International Atomic Energy Agency reports that Iran has developed more centrifuges to a further extent than permitted by the Joint Comprehensive Plan of Action (JCPOA), as the 2015 Iran nuclear deal is known, Viktorov said he does not agree that Iran has violated the agreement.

“The first step was made by… our American colleagues who unfortunately decided to quit the JCPOA [in 2018],” he said. “They quit the plan and that allowed the Iranian side to undertake some steps which are not in full compliance with the plan, which is unfortunate as well.”

Though Viktorov would only call Joe Biden “the possibly elected president” of the US, pointing out that he was only “appointed by the press” and not officially declared the victor, he said Russia “took note of some statements” that Biden seeks to rejoin the JCPOA.

If the US returns to the deal, “it will make many things simpler,” he said. “It will be helpful to reduce concerns and allow the Iranians to develop a peaceful atomic energy program and allow [the IAEA] to look at what is going on in the military sphere.”

“Maybe some provisions could be modified,” he said, in reference to Biden’s statements that he will strengthen the JCPOA, “but it’s a matter of negotiation with the interested parties, the Iranian authorities.”

As for whether Russia would sell arms to Iran after the UN arms embargo was lifted earlier this year, he said: “Iran is a sovereign state, why not? I am not familiar with specific plans; it’s a matter of negotiations.”

Viktorov said Russia is supportive of the Abraham Accords, in which Israel established diplomatic relations with the United Arab Emirates, Bahrain and Sudan, and said “any move towards interaction is a positive development, in of itself.”

Still, he said, “Israel should sit down and talk about how to take everybody’s legitimate concerns into account and not create alliances and blocs against somebody else,” an apparent reference to partnerships with Gulf states against Iran.

“We strongly believe that the Palestinian question should not be put aside. The normalization should not replace a Palestinian-Israeli settlement because this problem will remain and will continue to endanger not only the countries and peoples of the region but also many others around the globe,” he stated, while calling for a two-state solution.

Viktorov warned that the continuing Israeli-Palestinian conflict is “allowing terrorists to recruit more supporters into their ranks.”

Russia’s offer for Israel and the Palestinians to hold direct negotiations in Moscow still stands, as well as a suggestion to hold an international conference on the matter, he added.

Viktorov also spoke of his country’s efforts to combat COVID-19, saying that massive vaccination began this week in the Moscow region and will be distributed to all regions of the Russian Federation.

“We are sure our vaccine is not the worst in the world,” he said of doubts about the Russian inoculation.

Prime Minister Benjamin Netanyahu and Russian President Vladimir Putin discussed the matter in a phone call on November 16, and since then, Israeli and Russian authorities have been in contact coordinating the delivery of 1.5 million doses to Israel, he said.

“We feel the intention of our Israeli colleagues to diversify the use of vaccines in Israel is a good approach,” Viktorov said.