Not only did Russia and China perform their first joint military air patrol, but the Russian military seems to have had another present for China 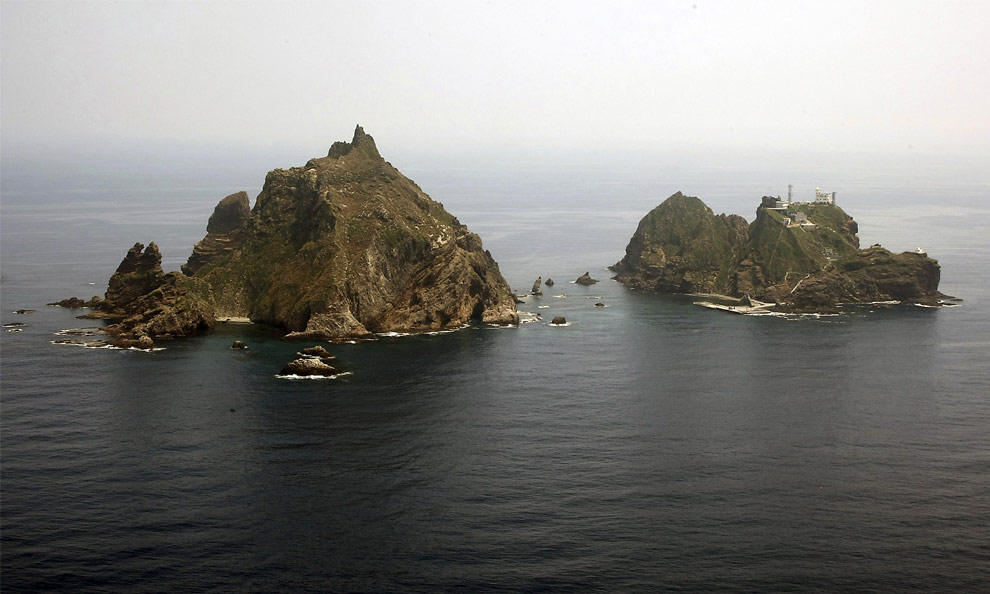 Japan and South Korea are involved in a long-standing dispute over Liancourt Rocks, a pair of tiny rocks in the Japanese Sea. It is a dispute of no relevance to the rest of the world because while the two nations argue the possession of these two rocks entitles them to 12 nautical miles of territorial waters around it, and 200 nautical miles of an exclusive economic zone, the rest of the disagrees. By international law only islands capable of sustaining life grant such rights over surrounding waters but not mere rocks.

It is a situation similar to that one in the South China Sea where mainland China, Taiwan (RoC), the Philippines, Malaysia and Vietnam all claim rights over the surrounding sea based on claims of in themselves disputed rocks, reefs and atolls.

As a result Western nations frequently sail within 12 nautical miles of islets controlled by China (but strangely only by China, others get a pass) to make a point that they do not recognize the Chinese claim to the surrounding sea calling these “freedom of navigation operations”.

Well this week the Russian and Chinese militaries, not only performed their first ever joint air patrol, but the Koreans and Japanese both claim that the Russians went ahead and made it into a de facto “freedom of navigation operation” by flying within 12 nautical miles of Liancourt Rocks which would put them in airspace claimed by South Korea (and technically North Korea) and Japan both. (But no such claim is made against Chinese aircraft.)

When the news of the joint patrol and of the South Korean challenge of it first emerged it was not entirely clear what had happened because the South Korean and Russian accounts were so divergent. (Also the Russian statements were fractitious and self-contradictory up to a point where the Russian military attache in Seoul initially issued an apology which was then retracted.)

South Koreans claimed they had fired flares and hundreds of warning shots, the Russians have now confirmed flares were fired but still deny there were any bullets flying.

The Russian report on the incident says the Koreans started acting “unprofessionally” when the Russians were still 13.5 nautical miles from the rocks, but omits to say how close to the rocks they eventually flew. What it does say is that Russian pilots “proceeded from the international border” which neither Japan our South Korea recognize:

What Japan calls Takeshima, South Korea marks as Tokto. The world calls it the Liancourt Islands. These two small uninhabited and remote rocks have long been disputed by the two countries. Neither Japan nor South Korea recognizes the international border, which our pilots proceed from.

So then Russia does not recognize the South Korean/Japanese claim to the waters around the Liancourt Rocks. It regards those waters as international airspace and its pilots acted on that basis.

That Japan is also mentioned by the Russian military means this is indeed a reference to the  stretch of water around the two rocks and not to the Koreans’ overzealous policing of the large “Korean Air Identificiation Zone” which has no legal status, actual or claimed. 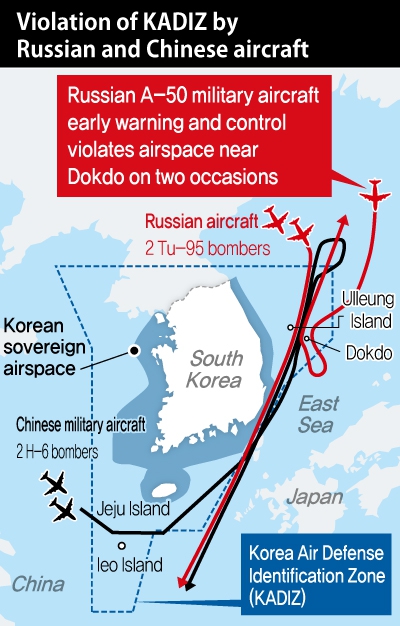 If the Russians flew over the Liancourt rocks, why did they do it? Whether the Koreans are right in claiming the waters there or not (they aren’t, but neither are they alone in claiming waters on the basis of rocks) it isn’t a huge hassle for the Russians to spare themselves a headache and avoid them. (As opposed to having to avoid the entire KADIZ which would cripple them.)

The South Korean media which takes that the Russians did so as a matter of fact, speculates the reason may have been to drive a wedge between South Korea and Japan by accentuating the differences between the two:

Some analysts suggested they chose Dokdo as a way of targeting South Korea-Japan relations – the weak link in the trilateral alliance with the US amid their deterioration over Japan’s recent retaliatory export controls.

“The Chinese and Russia military aircraft’s choice to enter over Dokdo was intended to deal a blow to the Indo-Pacific strategy by further deepening the fissure between South Korea and Japan, which are already in a state of conflict,” Cho said.

By claiming Dokdo as its own territory, Japan’s response has effectively become a protest against South Korea, which plays direct directly into Beijing and Moscow’s strategic objective.

Anatoly Karlin proposes something similar, that it was a way to add fuel to the fire of the South Korean and Japanese contradictions so as to ultimately peel away Seoul from the US and Japan.

I would propose a more direct and bland conjecture. The Chinese military is considerably more pro-Russian than the more business-oriented and less security-minded Chinese government and society as a whole. That is something the Russian military is learning to appreciate. As Chinese generals push for more Russia ties their Russian counterparts may have arranged for a little present in return: a freedom of navigation operation in the Western Pacific, but for once not against China but against US clients. They’re probably still both laughing about it now.