Russia Needs to Stop Wasting Time on Diplomacy With the USA, Focus All Energy on Beijing, Delhi and Others

With Russia diplomacy criminalized in the US by the deranged "Resistance" what else is there to do? ‘Something is rotten with the state of Denmark’, or if not Denmark then certainly the United States of America. It’s the only conclusion one can draw from the way the absolutely normal is nowadays treated as the most extraordinary drama.

On Monday, US President Donald Trump met Russian foreign minister Sergei Lavrov. It’s about as normal a diplomatic event as one could possibly imagine, but it caused much of the American commentariat to go into a collective meltdown.

‘Trump welcoming Russia’s top diplomat to the Oval Office is one of his most brazen moves yet,’ declared the Washington Post, which makes you think that Trump really needs to step up his game on the brazenness front. The Post isn’t alone in thinking this way, however. What one might call the ‘liberal’ TV channels leapt on the story too, dragging in some representatives of the American security apparatus to ram home the point (there was a time when liberals regarded the FBI and CIA with suspicion, but such days are apparently long gone).

And so it was that CNN brought on as a guest former FBI deputy director Andrew McCabe to ‘explain why the photograph tweeted by President Trump of his meeting with Russian foreign minister Sergei Lavrov is so extraordinary.’ As McCabe told CNN:

There’s no doubt there’s something deeply odd about the way this president interacts with Russia. We’ve never seen anything like this before. … Russia is our most significant enemy on the world stage. … I don’t think that we’ve ever seen a photograph out of the Oval Office on the lines of the one we saw today.

Meanwhile, MSNBC had its own star witness, former Under Secretary of State Richard Stengel. ‘Why is a head of state meeting with the Russian foreign minister?’ Stengel asked, ‘Vladimir Putin doesn’t meet with Mike Pompeo when he comes to Moscow. So it’s very curious and it’s very strange.’

Actually Rick, dear boy, Putin does meet with Pompeo, as you can see from this photo here. But when did one ever let little details like factual accuracy get in the way of a good line? Stengel wasn’t MSNBC’s only witness to Trump’s suspicious behaviour. Former US ambassador to Russia Michael McFaul also put in an appearance. ‘He’s obsessed with the East, like a certain world leader in the 1940s was obsessed with the East. Why is this guy obsessed with meeting with Russians all over the place’, the host asked McFaul. The latter let pass the gratuitous Hitler comparison, and gave his learned response: ‘It’s truly bizarre. I confess I do not have a rational explanation for it,’ said McFaul.

Just in case you think it was only the media, FBI, and the State Department, others were on the ball too. The Trump-Lavrov meeting had Twitter abuzz. Anne Applebaum, for instance, had the following to say. It’s all simply nuts. Trump is Hitler. A former ambassador can’t think of any reason why representatives of two major powers might wish to meet. A former deputy head of the US foreign service thinks that heads of state never meet foreign ministers.

And all of them believe that a photograph of the US President and the Russian foreign minister is totally unprecedented and suggestive of something deeply suspicious, though exactly what they can’t quite tell us. Which makes you wonder what they’d all make of this picture.

I don’t know about you, but that looks a lot like Sergei Lavrov and President Obama to me. So, was Obama a Russian agent? Was he secretly selling out US interests to a foreign power? Should we be investigating him as well? It’s all rather suspicious, don’t you think?

I’ll leave the last word to the excellent Fred Weir of the Christian Science Monitor:

It’s pretty clear by now that no normal dialog is going to be possible between Russia and the US. Perhaps ever again. It’s not my job to advise the Russians what to do, but if it were I would suggest they just give it up. Spend your time going to Beijing, Delhi, Ankara, even Berlin and Paris, but give Washington a miss.
It’s the most peculiar damned thing I have ever seen. Even at the lowest depths of the Cold War, the Washington Post would never have run a headline that described a US president meeting a Soviet leader in the Oval Office as “one of his most brazen moves yet.”
Analyzing the official photo of Trump and Lavrov in the Oval Office, the main — disapproving — takeaway the WaPo has to offer here is: “Judging by the expressions on their faces, the conversation does not seem to have been particularly acrimonious.” Geez.

Russia is not our enemy; China is.

No, they need to talk to stop dialogue invites misunderstandings that these two nuclear do not need! And neither does the world.

‘Trump welcoming Russia’s top diplomat to the Oval Office is one of his most brazen moves yet,’

That level of writing or speech, now so common in the US, has a tone a little like Pravda, 1959.

It’s almost hard to believe it gets published.

But it does, and regularly.

You have to talk to your adversaries. If not then you don’t know what they are thinking (used loosely in this case). It’s called diplomacy. Hello? Using the MSM comments as a reason for RU to stop talking to the US, the author has fallen on his sword. As for Annie A. she doesn’t seem to know much. It’s done all the time. And J.D. when are you going to get your head out of your a**? At least P.R. could have chosen some heavyweights to support his arguments. Not bimbos.

Thanks for two emails for asking donation.
I notice since several months ago that there are some coordinated efforts for alternative media to get together for Check Point Asia. I highly respect such efforts.
If you could focus a little bit more on problem solving, I am willing to work with you.
Let me explain my point using this article.

You state; spend your time going to Beijing, Delhi, Ankara, even Berlin and Paris, but give Washington a miss.

I think even if you say this here, nothing will happen. Instead, post your opinion at the state-owned media. I have been posting strategic advice for China to counter the US at Global Times, Chinese media.
I am pushing China to lead the coordinated propaganda alliance with Russia and Iran, Rogue States Alliance jokingly I said based on US labeling.
We are not in the cold war but in the serious hot war of propaganda. The new hot war in information age was only since 2000 triggered by the technology advancement of internet, social media and handset. Disinformation to demonize rogue states spreads worldwide instantly after the first delivery.
The US is extremely excellent and powerful in this war, three or four years ahead of others. Josef Nye called it soft power, but it is not soft power any longer. It is hard power for the war of 21st century.
A problem is that there are no strategy architects in rogue states, who are required very professional expertise of business marketing. Predicting the next step of the US, respond immediately or preemptively act to contain their next move.

As I assume that you are familiar with the pattern of the US strategy because it is quite simple, it is not impossible for like-minded people to work together for it.

Agreed however CA never claimed to be a strategist.(not to my knowledge)…..here’s a quote from Chris Hedges………..What kind of person engages in revolutionary activity? Is there a specific type?

There are different types, but they have certain characteristics in common. That’s why I quote theologian Reinhold Niebuhr when he talks about “sublime madness.”

I think that sublime madness — James Baldwin writes it’s not so much that [revolutionaries] have a vision, it’s that they are possessed by it. I think that’s right. They are often difficult, eccentric personalities by nature, because they are stepping out front to confront a system of power [in a way that is] almost a kind of a form of suicide. But in moments of extremity, these rebels are absolutely key; and that you can’t pull off seismic change without them.

Agree fully with the title header of this report.

IMO this is in preparation for a planned war with Iran on demand of the Israel Firsters to be fought by the Boys and Girls of America and to die, also on demand of Israel.

Russian Federation must loose no more time on that kind of political thinking.
Congress have now been taken over in its entirety by AIPAC.
The occupants in AIPAC hate Russia and Russians to the core.
Waste of time to try to talk to this alleged sick exceptional minds.

Russia is not the enemy but it will defend its country and people if attacked in a way never seen before.

These insane AIPAC people might think it over when they desperately want war with Russia and China.

Yep US Congress is totally in the hands of Israeli firster 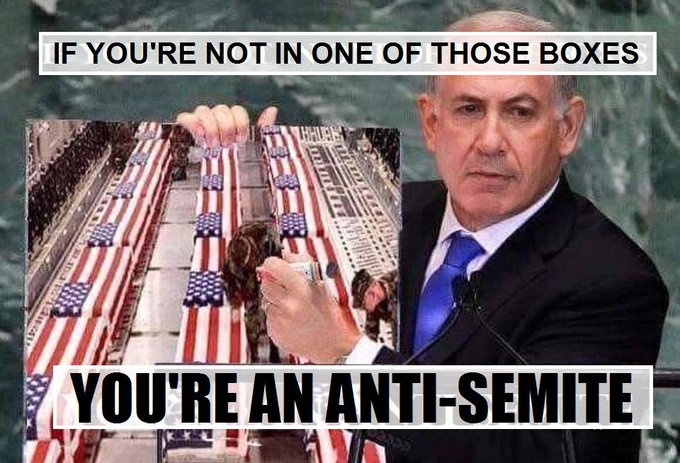 just like china needs to ignore hongkong, taiwan and xinjiang distraction and focus more on unite with japan and koreas. http://asiawithout.us/chipla.html