The Kremlin hid most of Belgorodfrom public view during the launching ceremony, but what it did show still offers important clues about the boat’s other “special projects” missions, including intelligence gathering and acting as a mothership for smaller manned and unmanned submarines.

On Apr. 23, 2019, Belgorod, which The War Zone previously profiled in detail here, slid down the slipway and into the water at Sevmash Shipyard in Severodvinsk in Northern Russia, which sits on the White Sea. Vladimir Putin, who was preparing for a meeting with North Korean Premier Kim Jong Un in Vladivostok in Russia’s Far East region, watched the ceremony via a television link-up, according to state-run media outlet TASS. Construction will now continue with the boat in the water and the Russian Navy is expected to formally commission the submarine sometime in 2020. 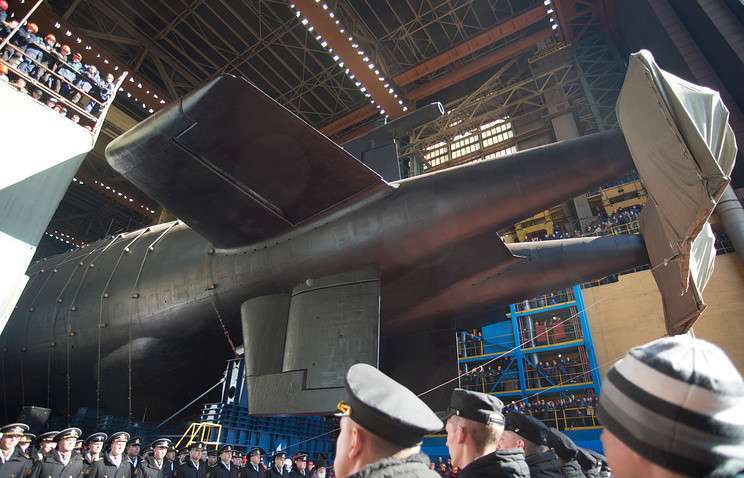 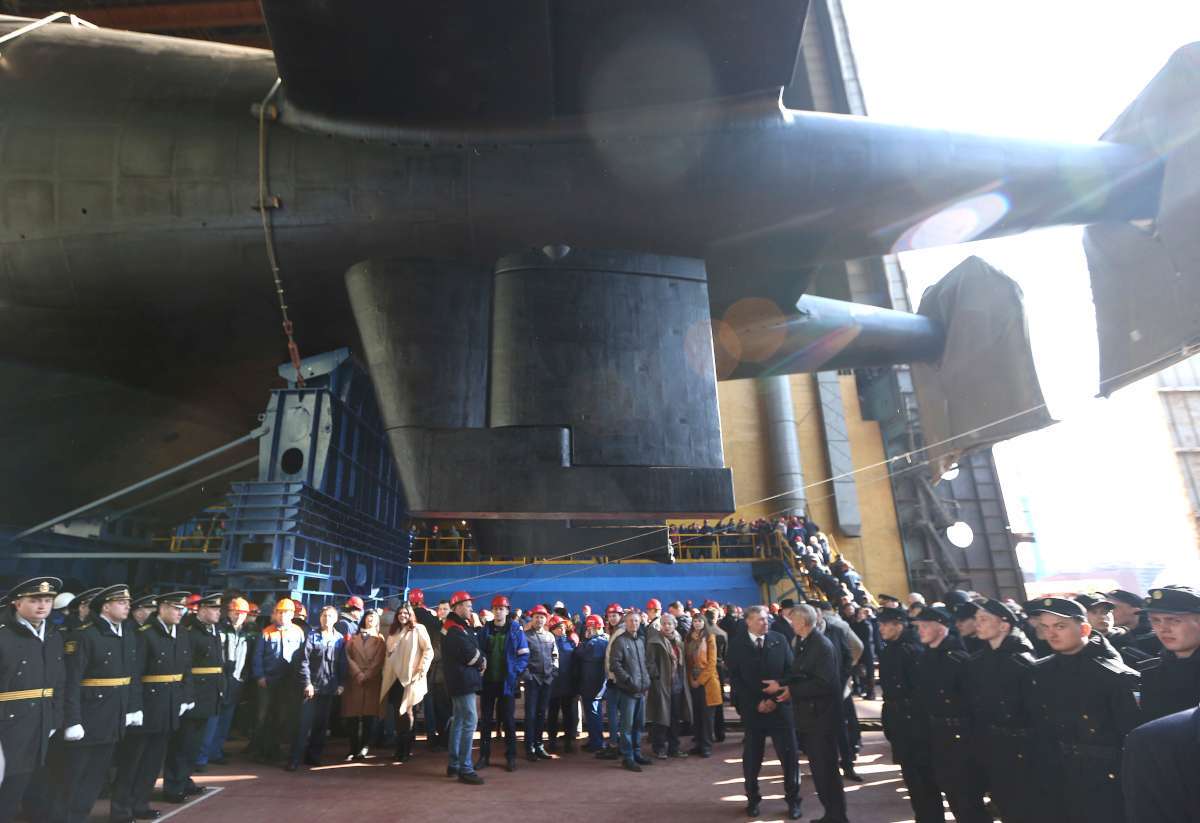 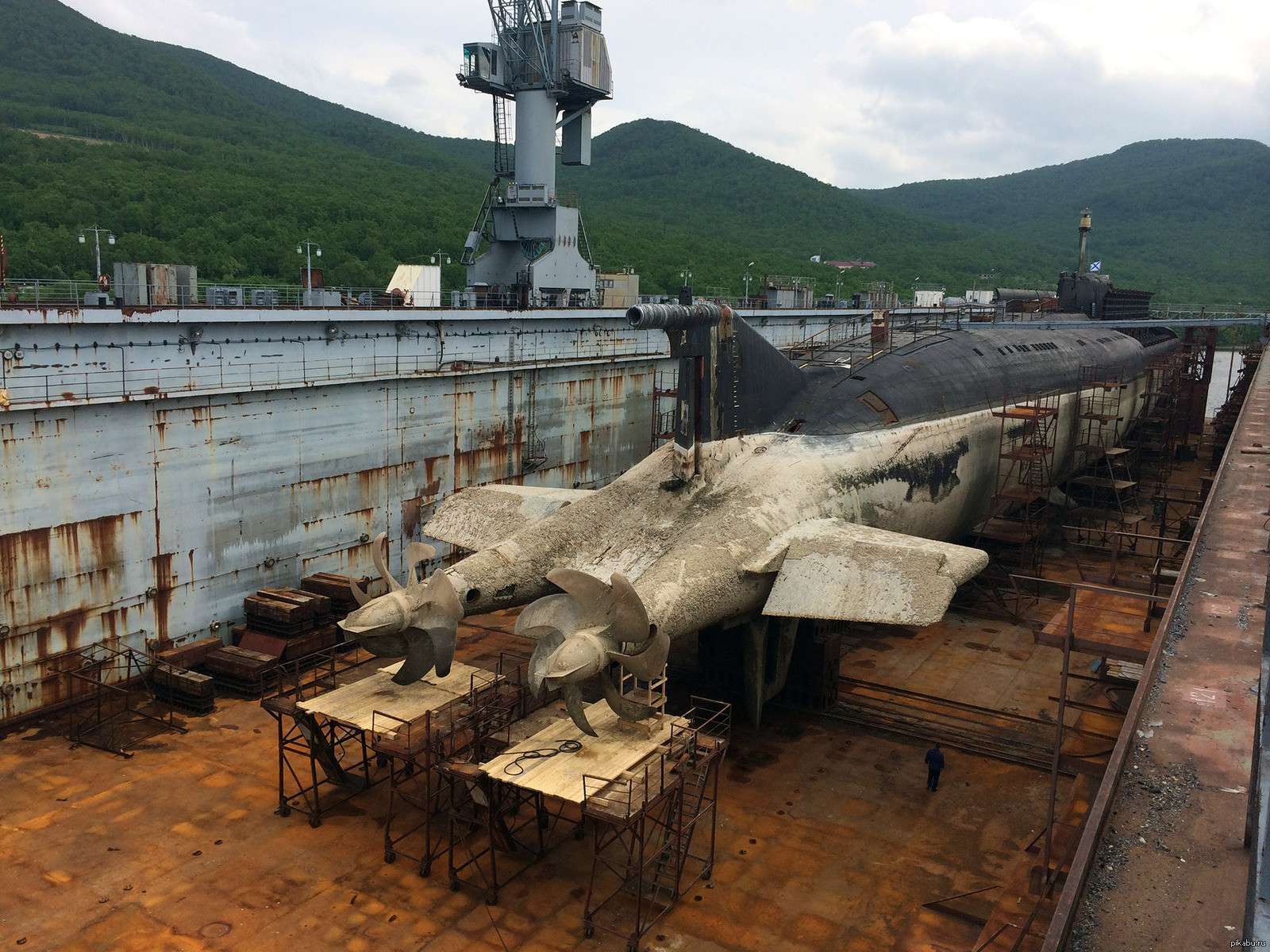 Sevmash first laid down Belgorod in 1992, less than a year after the collapse of the Soviet Union. It remained there in its unfinished state for nearly a decade. In 2010, Russia reportedly began planning to convert it to a special projects submarine, a process that officially began in 2012.

The Oscar II-class guided missile submarines, also known as Project 949AMs, are already some of the largest in the world. Their hullform is notably very wide to accommodate 24 huge P-700 Granit anti-ship cruise missiles housed in long compartments located between the outer and inner hulls on each side of the submarine. 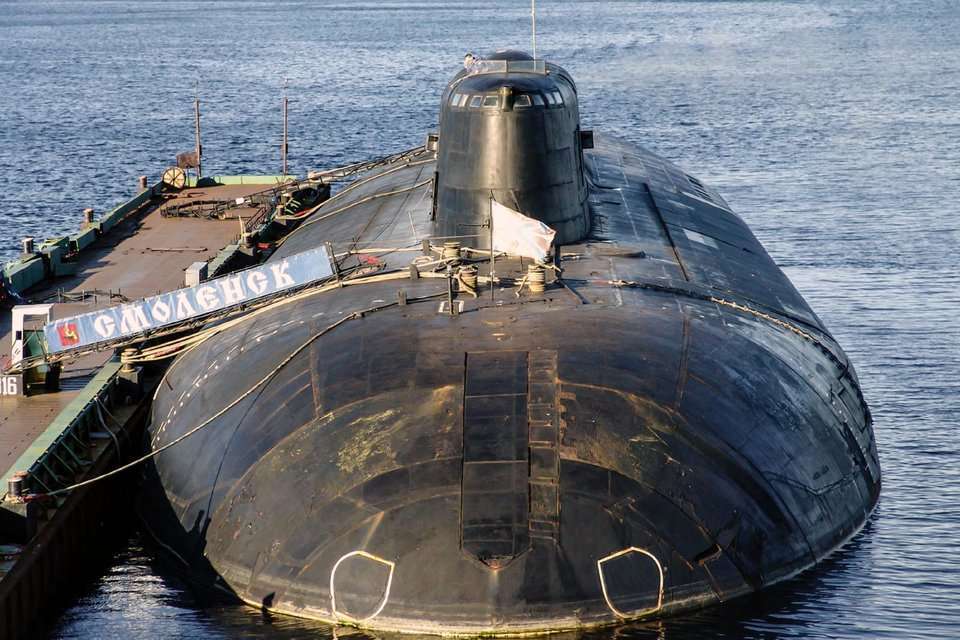 Belgorod‘s refit added nearly 100 feet to the boat’s overall length. This makes the K-139, also known as the Project 09852, longer than even the monstrous Soviet-era Typhoon-class ballistic missile submarines, of which only one remains in limited service with the Russian Navy.

Pictures from the ceremony at Sevmash only show the rear of the submarine. Experts have noted that some features, such as the tube to hold a towed sonar array at the top of the upper rudder, are carry-overs from the Oscar II-class.

The submarine’s two propellers were covered during the ceremony, making it impossible to tell for sure whether Belgorod uses the same seven-bladed design as the Project 949AM. There’s no indication that this special projects submarine has a more modern pump-jet design that could offer improved speed and acoustic signature performance. The coverings do show an apparent protrusion from the back of the screws, which indicate that the boat has what is known as propeller boss vortex diffusers, which you can read about in more detail here, to help reduce its acoustic signature.

But even the limited rear views do show a number of significant differences between the Project 09852 design and the earlier Project 949AMs that do point to other potential features on the submarine designed for various other special missions. For one, both of the lower rudders are significantly different from those on previous Oscar IIs.

Both of them are reinforced and squared off at the bottom. The right one has an opening and some additional features that could point to the ability to accommodate some sort of additional towed device. Another possibility is that this could be a cable layer, possibly feeding from a reel located inside the hull.

Most notably, there is a prominent bulge at the rear of the underside of the hull. This could be where spools of cable are stowed and ran out the back of the submarine through the fitting in the lower rudder assembly during deployment operations.

Pictures from the launch ceremony show a pair of circular doors and a larger rectangular one on the side of this bulge, as well. Though the circular doors could hold defensive countermeasures, their diameter is significantly larger than that of most modern decoys. In addition, more modern submarines typically launch these payloads aft, rather than sideways. Though Belgorod is, at its core, a Cold War-era submarine, this bulge is a new feature.

Some curious details on the 'Belgorad' bulge, though function(s) remains unclear pic.twitter.com/27PVEUmhnI

Adding in an outdated sideways launching self-protection system seems less likely than the possibility that these doors may point to a more specialized system, such as retractable auxiliary lateral thrusters or water jets for precise maneuvering. In the latter case, the doors could be part of a single system, with water getting sucked in on one side and pushed out the other.

One of the main missions for Russian special projects submarines is investigating, manipulating, or retrieving relatively small objects deep underwater, such as submarine cables on the sea floor. This kind of work requires fine movements and the ability to “hover” in a relatively stable position underwater. This might also explain the reinforced lower rudders if Belgorod is at all expected to “land” on the seabed during certain missions. Other subs Russia has outfitted for special missions, as well as American ones, have often featured retractable skids to help support them on the seafloor.

Being able to hold a particular position underwater could also be very important for launching and recovering manned or unmanned submarines. In 2015, in what appears to have been a deliberate leak, a briefing slide appeared in a Russian state television broadcast that showed Belgorod with a smaller submarine nestled in the underside of its hull. It’s not clear what this other submarine was, but some have posited that it could be the equally shadowy Project 10831 Losharik nuclear-powered midget submarine, another one of Russia’s special projects boats.

Unfortunately, there are no views of the top or the bottom of Belgorod‘s central hull, or of the front of the submarine, which could offer additional evidence of its capabilities and potential missions. The briefing slide that emerged in 2015 also indicated that the submarine would have some sort of additional object on top of the fuselage, which some have suggested might be a nuclear reactor intended to support underwater sensor networks, and that the boat will be able to launch a long-range nuclear-powered and nuclear-armed torpedo now known as Poseidon.

Additional views could help confirm just how many of the torpedoes, also known as the Status-6 or Kanyon, Belgorod may be able to carry and how.  Some have posited that the submarine could launch them from forward-firing tubes built into the gap between the hulls left from the removal of the P-700 cruise missiles. Another route might be to simply leverage the existing missile launch arrangement and modify it to release the Poseidons horizontally or at an angle. The large compartment seems ideally sized for the large nuclear-powered torpedoes, either way.

Regardless, Belgorod‘s development is intrinsically linked to this controversial weapon, which reportedly has effectively unlimited range and design features that make it very difficult to detect. By every indication, the weapon is meant to give Russia a second-strike deterrent capability that is entirely immune to U.S. missile defenses.

The torpedo will also reportedly carry a particularly dirty nuclear warhead. The resulting blast might be enough to evaporate all the water in a harbor or create a huge tidal wave that sends contaminated water flooding over what’s left of a target area, bathing it in dangerous levels of radiation to impede any continued activity at impacted sites.

In March 2019, CNBC reported that U.S. intelligence assessments say that Poseidon will not be operational before 2027 on Belgorod or other submarines. The month before, the Russian Ministry of Defense had released the video below, showing an underwater test of the weapon.

A computer-generated video that Russia released in 2018 as part of President Vladimir Putin’s annual state-of-the-union speech, in which he also officially confirmed the existence of Poseidon, has suggested that Belgorod could also launch the nuclear-powered Harpsichord 2P-PM mini-drone submarine from a hangar on top of the hull.

Harpsichord could carry additional sonars and other sensors to help scout ahead of Belgorod, and any manned midget submarine it might be carrying, for objects of interest or to just help map out a particular area or carry out deeper diving investigative, surveillance, and object manipulation missions.