Russia-Belarus Monetary Integration Would Actually Make a Lot of Sense 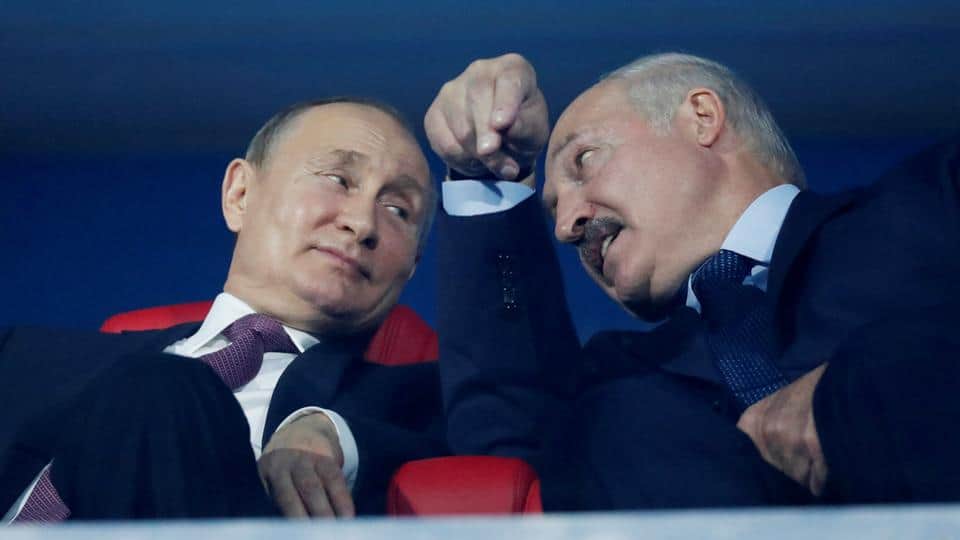 The fallout from the presidential elections in Belarus demonstrates how quickly a wholly domestic issue can become international and geopolitical – and the extent to which the Kremlin’s response to unrest on its doorstep is once again improvised as opposed to premeditated.

Belarus has always been unique in the post-communist region, a characteristic that is unlikely to change soon. It does not resemble Ukraine because its cohesive sense of national identity leaves few internal fault lines that may be exploited; nor does it resemble Armenia, given its strategic economic and political value to Russia. Its larger market is more sophisticated, while its territory provides a buffer between NATO members and Russia’s geographically exposed western border.

Thus, while a hybrid military intervention by Moscow is unlikely, so too is an amicable settlement with the opposition. Moscow does not want to control Belarus, but it is seeking to control events in order to safeguard its strategic interests. It has decided that siding with President Alexander Lukashenko is the least bad option – for now and possibly some time to come.

As such, the risk outlook in Belarus is clearer in the short to medium term than it appears. Without substantive political and economic support from Russia, Lukashenko would be very unlikely to be able to stay in office. However, through guaranteeing his position, Moscow is exploiting his weakness to consolidate its own interests ahead of a managed political transition in the coming years.

An offer that Luka can’t refuse?

The way in which Moscow is likely to accomplish this is through seizing the moment on the economic and political integration agenda between the two countries, which could include pulling Belarus into a much closer economic union, if not a currency union. Setting aside Lukashenko’s own political agenda, there is an economic argument for doing so.

Lukashenko signed off on a Union State deal with Russia in 1999 that would extend and deepen the current Eurasia Economic Union (EEU) partnership by creating a “Rublezone” that mirrors the Eurozone: open borders with totally free movement of labour, capital and goods as well as a common currency “from Brest to Vladivostok”, as Lukashenko said last week.

The Belarusian economy is currently in decline due to structural deficiencies, which are being exacerbated by the coronavirus (COVID-19) pandemic, the civil unrest, and reputational decline in international credit markets. State-owned enterprises, especially in the industrial sector, face long-standing productivity issues arising from economic policies that prioritise full employment and wage increases [LOL. What a bad person Lukashenko, prioritizing employment and wages LOL, giving a large swathe of the population the equivalent of a well-protected union job. Sure, when done at the expense of competitiveness it’s unfortunately self-defeating and empoverishing in the long-run (as the USSR etc proved), but come on, compared to the western elites which are trying their best to drive everyone into flipping burgers for them, the man is a saint.], which have been sustained through preferential lending by state-owned banks – with the central bank subsidising the interest rate differential. Distorted markets, restructuring disincentives, and subpar asset quality, combined with the corresponding currency instability and high levels of foreign debt, have been the result.

The integration of Belarus into a Rublezone would provide a more robust currency; outsource and improve macroeconomic management; temporarily eliminate dysfunctions within the banking sector; and enable the financial transfers implicit in a currency union.

A banking union would also be likely, not least because Russian banks occupy around a 30% share in the Belarusian market.

Joint liability, secured by the strongest anchor of the monetary union, is also an important part of such a set-up. In the euro area, it has taken decades of slow progress. With regard to the potential Rublezone, Russia already holds about 50% of Belarus’ national debt.

And it doesn’t have to stop there. There are other slower moving steps towards integration that could be achieved over the next six-month, nine-month and two-year periods.

The Belarusian ruble (BYN) has so far devalued by just under 20%, compared with 30-60% in previous crises. Time is on Russia’s side, as the longer it waits with its union the more pressure Lukashenko will be under. Hard currency reserves have fallen by $1.4bn in just the last month from $8.8bn to $7.4bn as of September 1, according to the National Bank of the Republic of Belarus (NBRB). And monetary integration certainly needs preparation.

From an investor’s point of view countries whose financial markets are characterised by higher risk premiums tend to benefit from participation in currency unions; Belarus will be no different. Yet, as the convergence in trades in government bonds between southern European states and Germany (the anchor of the euro area) in the 1990s and 2000s showed, monetary integration and positive headline data can produce a “convergence fantasy” into which investors are drawn. Such trading strategies may include some elements of moral hazard, but participation in a Rublezone would push the Belarus country risk premiums much closer to the much lower Russian levels and make borrowing a lot cheaper for Minsk.

In this scenario Belarus could avoid the classic shock therapy thanks to its increased borrowing power. That would allow for a more cautious approach to economic reform in which ownership changes and partial liberalisation are phased and better controlled. That should prevent the sudden emergence of a domestic oligarchy, which has so distorted the other two economies in the neighbourhood of Russia and Ukraine. In exchange, Moscow would gain oversight and control of the these transfers, thereby deepening its geostrategic footprint. With Belarus internationally isolated thanks to Lukashenko’s presence, it would also stall, and maybe reverse, the tentative diversification of foreign, trade and investment relations that has taken place over the past 5-10 years. New economic opportunities will present themselves in due course, however, not least through partial privatisation, which would effectively amount to an open call for Russian capital.

The limits of band-aids and steroids

But even if a well-thought-out Rublezone was set up, even in the short to medium term the economy is going to suffer a lot of pain. High quality foreign direct investment from the EU is very likely to dry up. EU sanctions targeting politically exposed individuals in state-owned companies will likely precipitate legal reshuffling by investors. Investors engaged in joint ventures with state-owned enterprises may face contract revisions, especially if Russian corporates or state-owned enterprises take ownership of privatised shares. The industrial sector faces elevated risks in this regard. Another layer of complexity will be added for Western investors if Russian buyers are on US/EU sanctions lists.

Elsewhere, the jewel in the cumbersome crown of the Belarusian economy – the IT sector – is being chipped out by the king himself. Amid Lukashenko’s crackdown on the opposition, some 300 CEOs of IT companies have threatened to shift their operations elsewhere. This is not an empty threat: twelve companies are already in the process of packing their bags; 59 have already moved staff; and another 112 are actively examining options.

Beyond the immediate impact, Belarus would lose its attractiveness as a gateway to the Russian market and/or the EEU that is not fully exposed to political risks within Russia itself. This is an inevitable consequence of trading off institutional sovereignty for closer economic and monetary union, which will also require some level of political integration.

Moreover, there are considerable economic risks, as the Russian economy itself is beleaguered by chronic and structural weaknesses. In recent years, Russia has failed to overcome its weak growth trajectory, reducing the long-term attractiveness of economic and monetary integration. By way of comparison, the Eurozone might not have survived the 2010s had Germany not successfully [“successfully”] healed its “sick man” status in the 2000s.

Nonetheless, the Rublezone scenario is likely to enable Belarus to muddle through economically over the coming years, even if it enters with weaker structures. Yet while there is clear logic for such an arrangement in the short to medium term, its economic sustainability is questionable in the long term absent deeper political integration.

The Euro area crises proved that integration within a currency union is not necessarily irreversible, as did the breakup of Yugoslavia. Yet in order to do this successfully, strategic preparation with other important economic partners is necessary, as Slovenia and Croatia demonstrated. The improvisational approach of Greece in 2015 showed how easy it is to get it wrong.

As it floats listlessly on the periphery of a Rublezone that is unlikely to be underpinned by a fully fledged political union, Belarus may find itself drifting away from Russia in the longer term. The tides will be economic, but also political. By keeping Lukashenko in power, Moscow will be threatening the goodwill of much of the strongly pro-Russian public, planting the seeds for instability further down the line.

The opposition is unlikely to simply vanish, even if Lukashenko has its leaders arrested or Moscow plays divide-and-rule with the factions that are likely to emerge. The protests have permanently undermined Lukashenko’s authority, eroding it to a final line of defence that is provided by the security forces and Moscow. Whether the opposition are forced underground, or a tentative consensus is reached, Belarus is likely to shift away from its system of centralised governance to a stakeholder model.

This is not necessarily incompatible with Russian objectives, but Moscow must first stabilise the situation with a view to preparing the ground for the post-Lukashenko era. Moscow was comfortable with the institutional autonomy that Belarus enjoyed under Lukashenko; although the president is erratic, he is a known quantity who knows which side his bread is buttered. If a new consensus is to emerge which is more pluralistic, Moscow must first reduce the scope that Belarus has to wander off-piste. Co-opting stakeholders, capturing institutions, shaping public discourse and increasing interdependence are key strategies to this end, but they take time and require that the pace of events be slowed. Creating a Rublezone, or at least a roadmap towards such a setup, would be a logical step in this regard.

Yet the strategy is a high-risk one given that the Belarusian public, who so clearly want change, are likely to associate Moscow with the violent intransigence of Lukashenko. The risks of political instability and civil unrest are unlikely to dissipate even if they are dampened, which creates the possibility of a more radical break between Belarus and Moscow and abandoning the Rublezone altogether.