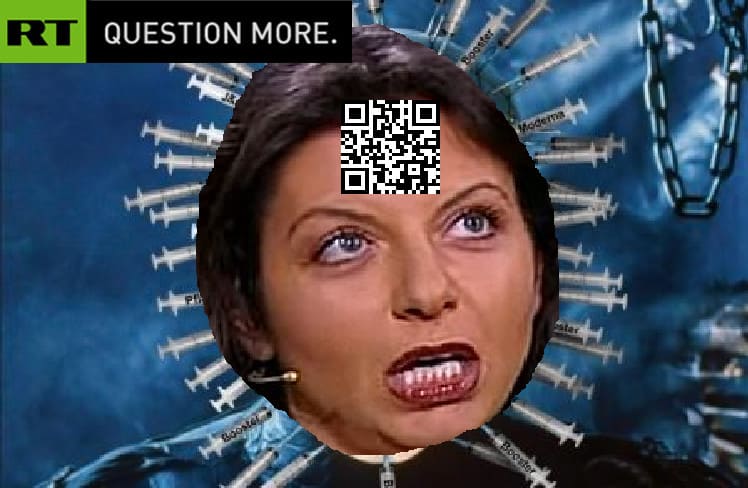 By Riley Waggaman, a former editor at RT.com

Dear friends, acquaintances and people who just know me: If you do not have antibodies and are not vaccinated, do not come to my house. Don’t come to my work. Do not come up to me on the street and at a party. I don’t know you.

Doesn’t Simonyan understand that she’s putting lives in danger with such a tempting offer?

The public health-loving Russian government is threatening to bring criminal charges against doctors who decline the 10,000% safe and effective COVID jab. That’s a very persuasive, scientific case for getting the shot. But now a lot of medical professionals are probably thinking: “jail is unfun, but… no more Margarita Simonyan.” What have you done, Margarita?

This alone is totally inexcusable and probably borderline bio-terrorism. But the RT chief then had the audacity to claim that the Unvaxxed are unrepentant child murderers—even while making seductive promises to those who refuse the jab, knowing full well that there are hundreds of millions of Russians who would do almost anything to never have to see or hear her ever again.

“[B]ecause of you, my children can now die,” Simonyan said, apparently accusing the unjabbed of robbing her offspring of immortality?

She also told 50%+ of Russians: “I cannot forgive you for the deaths of the children of my country.”

Margarita Simonyan used to be our role model. But how can we respect someone who tries to lure people away from the life-saving vaccine, and then hides behind her kids instead of taking responsibility for her vile words?

By the way: how many children have died from COVID in Russia? We only ask because we’re pretty sure the Russian government doesn’t publish data showing COVID-related deaths across age groups. In fact, when Moscow rolled out its compulsory vaccination policy in June, we sent several messages to the Moscow Health Department—using our official and very fancy RT email account!—asking if they could tell us the average age of COVID death in the capital. Never heard back. Why isn’t this extremely basic information publicly available? Also: whatever happened to the extremely dangerous “Moscow strain”?

“Inject yourself with our comically unproven slurry or Margarita Simonyan won’t talk to you anymore!”

Imagine how desperate and out-of-touch the Russian government must be.

These are truly special times we are living through. Do not despair, these people are clowns and will fail.

27 Comments
Leave A Reply
Cancel Reply
Read the rules before you think about commenting
Telegram Group
AE has a supporting readers Telegram group where we hang out and exchange leads and takes. If you have ever donated to AE drop me a line on email and I'll send you the link to join.