Report: Israel Plans to Attack the Houthis in Yemen Because “Iran” The Kuwaiti newspaper al-Jarida is quoting “sources” familiar with the situation ho say that Israel is planning to start attacking targets in the Shi’ite Houthi movementin northern Yemen, as well as targets along the Straits of Bab el-Mandeb.

The strikes are being presented by Israeli officials as a continuation of Israel’s attacks against Iranian interests, with the sources setting this up to spin the attack as being about Iranian weapons shipments.

Israel is said to be sharing intelligence with the Arab states in the area, presumably meaning Saudi Arabia, the United Arab Emirates, and other GCC nations involved in the ongoing war in Yemen.

Spinning the Houthis as a major client of Iran is in keeping with US and Saudi narratives trying to justify the Yemen War, and even though the Houthis have denied this, Israel seems to be willing to buy in.

https://stephenlendman.org/2019/08/cia-afghan-paramilitaries-prevent-restoration-of-peace/
CIA-trained Afghan militias look to prolong this conflict. Peace is but an illusion or so it seems.

Apparently the US military isnt doing enough to please its client, Israel – so Israel will take it upon itself to go into Yemen (and Iraq) to bomb the hell out of them ..all without just cause (is there any ‘just cause’ for bombing another country into oblivion?)..it will take some time for a retaliation…but there will be just that against the occupation obsessed Israel..

Maybe you should move over there so you can get bombed too..Iran has had it’s fingers in juat about everything and it should be wiped out too

Hope their drones can reach Israhell. Some kama they are gonna have to get.

You can’t even spell

It is believed by many Israel has already been in Yemen testing its neutron bombs nuclear arsenal in Yemen painted as saudi Jets
https://www.veteranstoday.com/2015/05/28/nuclear-war-has-begun-in-yemen/
https://www.youtube.com/watch?v=Aqlp8mTvFa8

Already happening I am sure.

The Non Semitic Russian Expats & spawn thereof Khazarians found out the Yemen people are the closest thing left to an ancient Hebrew as per modern DNA testing.

how uneducated can u BE
https://youtu.be/GOnOzzwMWhM

“how uneducated can u BE”
The h should be capitalized, as the beginning of a sentence, u should be spelled, you.

Be should not be capitalized, written rather as, be, and there needs to be punctuation at the end of the sentence.

I was only ranked in the top 97% of the whole of the North American States when I graduated and took my college entrance exam, because I don’t like advanced math and yankee english composition, and I know better than that hen scratch you cobbled together!

ur ignorant as fuck, its called SHORTHAND yemeni jews like me are israelite, not yemeni shiites who attack and kill us.

This discussion confirms the worst. Blood and soil are combing to a theater near you. All hate is self hate imo.

Then them zionist Non Semitic Khazarians must hate themselves a lot, cause they say anyone not in their cult is an soul less animal, not is not a sin to kill, rape, steal from soul less cattle peopel who are put on earth to serve them in any capacity they should chose.

If that ain’t hate, I don’t know what is.
Except maybe this.
How you like this Israhell T Shirt? 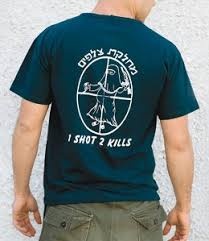 How interesting! So the ancient Hebrew blood is still running in veins of people in 2020! Simply shocking to me…no wonder Israel would love to get rid of them..
Yemenis have more right to call themselves Israelites than people in the recently (1947) formed Israel filled with Eastern Europeans of Khazarian decent..

ignorant lady get educated. all jees have genetic links and genes dont make a people that ur racist Nazi outlook https://youtu.be/GOnOzzwMWhM

100 Israeli Doctors Pen a…
13 Apr 21 by ken
People continually miss the point in this exercise which is ...

When Police Start Raiding Our…
13 Apr 21 by yuri
hyperbole amusing…the people in angloshere crave servitude you cannot convince ...
Who or What Is Empire?