How do they squeeze so much crap into a single week? 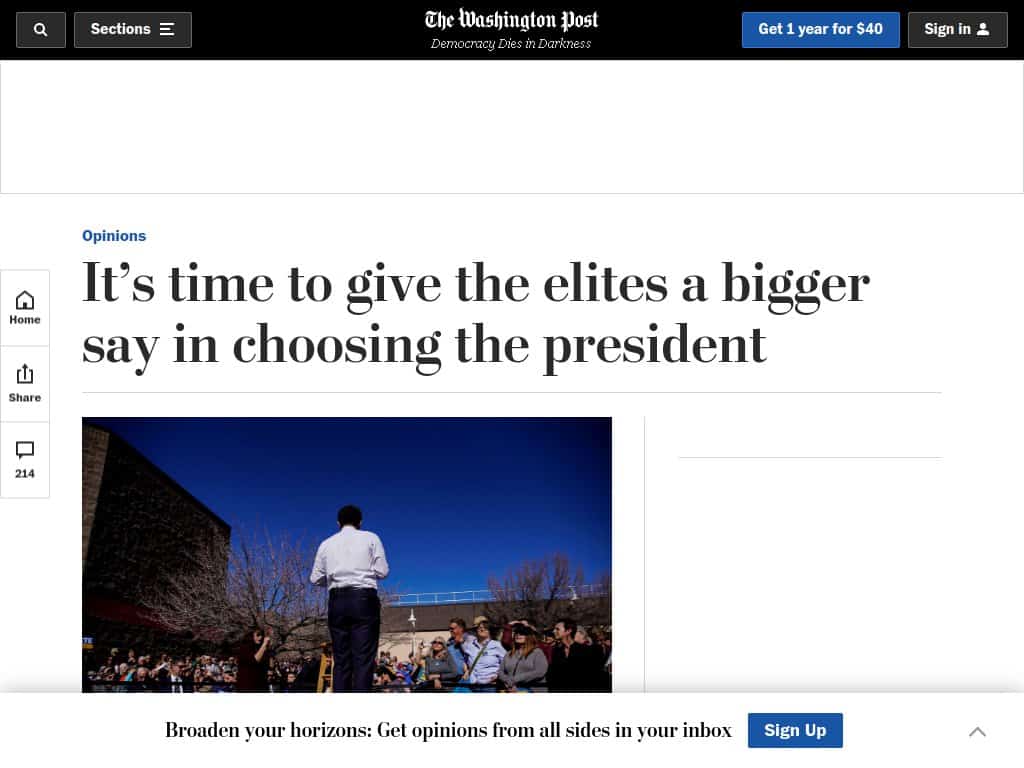 It is a strange world we live in. At least, it is if you live in the world of political commentary. I don’t know if it was always this odd, or it’s just me getting old and cynical, but it feels as if it gets more and more unhinged every year. This week in particular was a gem, with so much bizarre, wacky reporting flitting across my screen that it’s hard to pick out just one example to analyze in depth. Instead, I’ve decided to highlight several of the weirdest bits of writing I came across in the past few days. Here they are:

First out of the gates was The Washington Post. ‘Democracy dies in darkness’ is the newspaper’s banner, right under which it ran the headline ‘It’s time to give the elites a bigger say in choosing the president.’

Yup, you read that right. It’s not a spoof. Apparently, the problem with America is that its political system is not elitist enough. To be fair to author Julia Azari, there is a lot wrong with the way that Americans select president candidates. A party system in which candidates are chosen by party members, as in many other countries, might work better. But Azari’s solution of a system in which people choose delegates who are then free to do whatever they want regardless of their electors’ preference, and are thus left to stitch things up in a process of elite bargaining behind the scenes, is more than a little strange.

Unsurprisingly, the article got a very negative reception. In response, the paper changed its headline, which now reads ‘It’s time to switch to preference primaries’. But you can still see much of the original title in the webpage URL, which includes the phrase ‘fix-primaries-let-elites-decide/’. It seems that democracy doesn’t so much die in darkness as in right out in the open in the op-ed pages of the Washington Post.

Next up was a very weird article in The Guardian by former Moscow correspondent Ben Judah and David Adler, who’s listed as ‘Policy Leader Fellow at the School of Transnational Governance’, whatever that is. Judah is the guy who produced a book about Russia called ‘Fragile Empire’, with the gloriously ill-timed subtitle ‘How Russia fell in and out of love with Vladimir Putin’. I say ‘ill-timed’ because Judah published this in 2013 just a few months before Putin’s rating shot up to record highs following the annexation of Crimea. Meanwhile, the predicted collapse of the ‘fragile empire’ remains as remote as ever.

Anyway, Judah and Adler think that Bernie Sanders is the man for them. Not because he’d be the best president for the United States of America, but because ‘Putin should fear a President Bernie’. According to our Guardian geniuses, Vladimir Putin’s power rests on a) hydrocarbons, b) corruption, and c) propaganda. I’m guessing that political, economic, and social stability, improved health, a rising sense of national self-confidence, and the like have nothing to do with it. For Judah and Adler it’s a given that the foundations of Putin’s power are all bad.

And that’s where Bernie comes in. For apparently he will work to ‘decarbonize’ the American economy, so undermining point a) of Putin’s power base; he will institute a program of ‘corporate accountability’, which will make it impossible for Putin’s cronies to hide their money overseas anymore, so weakening point b); and finally, ‘Sander avoids the lazy cold war rhetoric about “the Russians” that helps boost Putin’s legitimacy back at home. Somewhat perversely, by not being so hostile to Russia, he’ll actually weaken it (or at least the ruling regime) by undercutting point c). Thus conclude Judah and Adler,

It should come as no surprise, therefore, that those who understand Putin’s kleptocratic system – such as the leader of the Russian opposition, Alexei Navalny – are now rooting for Sanders.

I have to say that it’s news to me that Navany is ‘leader of the Russian opposition’. But even if he was, this would still be nonsense on stilts. How exactly will ‘decarbonizing’ the United States wreck Putin’s power base? At best, such a process would take decades. Putin will be long gone by then. As for ‘corporate accountability’ – it’s a good thing in and of itself, but it’s connection with Russia is more than a little tenuous. And for sure, ‘lazy cold war rhetoric’ is harmful, but Judah’s denunciation of it is very much a case of the pot calling the kettle black. If you think it’s so wrongheaded, Ben, why don’t you tone it down a bit yourself?

More fundamentally, though, one has to ask why any of this should matter to American voters. Surely their decision should rest on who they think has the best policies for the United States, not on whether Putin ‘fears’ a given candidate. And, in any case, does he really fear him? Vladimir Vladimirovich Putin trembling in his boots at the thought of President Bernie! What a load of cobblers!

Judah and Adler aren’t the worst offenders, however. The prize for this week’s most hysterical piece goes to the US-based ‘Center for Security Policy’ and its article ‘Russia poises to grab Ireland to cut NATO, intercept cables’. This starts off with the alarming news that,

The Putin regime has mapped out a plan to invade Ireland, a vital telecommunications and logistics hub linking North America and Europe.

What, you might ask, is the basis for this amazing claim? The answer is an article in The Sunday Times which claimed that Russia’s military intelligence agency, the GRU, had sent agents to Ireland ‘to map the precise location of the fibre-optic, ocean bed cables that connect Europe to America.’ This may or may not be true. I have no idea. But as several people subsequently pointed out, if true, the GRU is wasting its time, because the ‘precise location of the fibre-optic, ocean bed cables’ is publicly available information, which anybody can look up on the internet. In any case, moving from GRU agents spying on Ireland to ‘The Putin regime has mapped out a plan to invade Ireland’ is, as Mark Galeotti put it on Twitter, ‘insane’.

Insane indeed, but also pretty much par for the course nowadays. Which leads me on nicely to the final dose of craziness – an article in Foreign Policy entitled ‘Iraq needs regime change again.’ Because it worked so well last time, you know.

Author [ex-Bus official] John Hannah suggests that the United States throw its support behind the Shia-dominated street protests which have been rocking Iraq for several months. America should ‘invest in the protest movement’, says Hannah. Because obviously, Shiite Iraqi protestors are all massive admirers of the United States, would just love to have the USA invest in their protests (think of how much it would boost their domestic credibility!), and would be sure to do America’s bidding should they come to power. ‘The Iraqi regime as currently constituted is increasingly not a viable partner for advancing U.S. interests … that is an intolerable situation’, writes Hannah. Intolerable! How dare a foreign government not advance US interests. Topple it! It never fails to do the trick.

Looking at the end of Hannah’s article we come across some interesting news about the author. ‘During the presidency of George W. Bush’, we are told, ‘he served for eight years on the staff of Vice President Cheney, including as the vice president’s national security advisor’. Now it becomes clear. He’s one of those people who urged regime change in Iraq in 2003. Not only urged it, in fact, but was right at the heart of the decision to enact it. You’d think he’d feel a little embarrassed and try to avoid pontificating about Iraq. Do these guys never learn??

Beyond that. I have some other questions. Why does all this stuff get published?

Why is nobody held accountable for serial errors of judgement? Don’t our media and think tanks have any sense of shame? Apparently not is the apparent answer to the final question. They just keep adding to the deluge of filth which fills ours news feeds. ‘Russia meddling to help Trump win re-election’ is today’s main headline. Ah yes, how foolish of me. It’s all the Russians’ fault. I must try and remember that.