Rand Paul Roasts Blinken: “You’d Think You’d Kind of Know Before You off Somebody With a Predator Drone”

Incinerate seven children then feint ignorance — it is the Empire way

Sen. @RandPaul: "The guy the Biden administration droned: was he an aid worker or an ISIS-K operative?"

Sec. Blinken: "I don't know because we're reviewing it."

Sen. Paul: "You'd think you'd kind of know before you off somebody with a predator drone." pic.twitter.com/kGWSuTySho

Sen. Rand Paul grilled Secretary of State Antony Blinken over whether the US actually knows whether a drone strike in Afghanistan killed an ISIS-K terrorist or an aid worker — adding, “You’d think you’d kind of know before you off someone,” after Blinken failed to provide a straight answer.

During a Senate Foreign Affairs Committee hearing on Afghanistan on Tuesday, Paul (R-Ky.) pressed Blinken about last month’s drone attack in Kabul, which reportedly accidentally targeted an aid worker, not a terrorist.

The Republican senator questioned Blinken over the identity of the person the Biden administration “droned” after reports emerged that an innocent aid worker and his family were killed instead of the intended ISIS-K target.

The secretary of state told the hearing that the identity of the person was still being reviewed.

“So you don’t know or won’t tell us?” Paul pressed the nation’s top diplomat. “I don’t, I don’t know, because we’re reviewing it,” Blinken responded.

Paul hit back: “You think you’d kind of know before you off somebody with a Predator drone whether he’s an aid worker or he’s ISIS-K.”

The senator warned that the strike would result in “blowback” by inspiring hundreds to join terror groups over the killing of innocent people.

“And the thing is there is blowback to that. I mean I don’t know if it’s true, but I see these pictures of these beautiful children that were killed in the attack. If that’s true, and not propaganda, if that’s true, guess what: Maybe you’re created hundreds or thousands of new potential terrorists from bombing the wrong people,” he said. 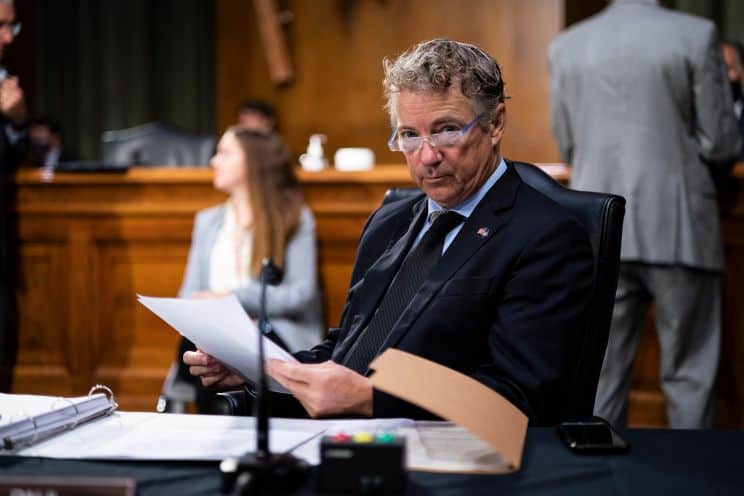 Then, speaking about the millions of dollars of military equipment the US left behind at Bagram Air Base, including Black Hawk helicopters and armored vehicles seized by the Taliban, Paul suggested the administration should have bombed the base instead.

“I mean, even though you said you didn’t know any of this and was all surprised. Once they took all of our stuff, we should have said, ‘You got 20 minutes to get out of it because we’re going to blow it all up,’” Paul said.

“Then you would have sent a message of strength. Instead we found somebody who we’re not sure whether it was an aid worker or an ISIS-K operative. See, that’s not, that’s not sending a signal of strength, and in the end there will be more blowback from it if you killed an aid worker on accident,” he continued.