Russia’s latest corvette, the “Gremyashchiy”, which is currently in the final stages of testing, will be equipped with Zircon hypersonic missiles, announced Russian President Vladimir Putin during an inspection of the ship, the TASS news agency reports.

The Russian president decided to visit the ship while on a trip to Kaliningrad. The ship’s commander, Second-rank Captain Roman Dovgaylov drew Putin’s attention to the bow of the vessel, which contains launcher pods for Kalibr cruise missiles.

While talking to the president, the officer pointed out that the pods can also take Zircon hypersonic missiles.

“It will definitely be a Zircon,” the president responded, turning to Defense Minister Sergey Shoygu, who nodded in response.

Putin unveiled the Zircon missile during his address to the Federal Assembly in February 2019. He claimed that the new missile could reach speeds of around Mach 9 (nine times the speed of sound), fly further than 1,000 km, and destroy both land and water targets. The president said that submarines and surface vessels would be armed with the new missile.

The Gremashchiy corvette was developed by the Almaz Central Marine Design Bureau. In April 2019, the ship was sent to the Baltic Sea for sea trials. The ship should be transferred to the Russian Navy before the end of the year.

Earlier reports indicated that the missile will be test-fired from a ship near the end of this year, and will be launched for the first time from a submarine in 2020.

Might we be seeing the future of Navel Warfare.
Massively armed. low profile, fast “Corvette’s”.
Yes, I will go with the classification that the Russians have deemed these ships.
Interesting times.
Wonder how the repairs are going on ALL those ridiculously expensive “floating barges”, currently in dry dock on the East Coast of the US.
Crazy world.

The Russian Navy calls them Corvettes but they are frigates, and are classified as such by NATO. At 2,200 tons they far outsize Russia’s actual missile corvettes the Buyan-M and Karakurt classes who each weigh in at 800 and 900 tons. I mean seriously, they are equipped with a helicopter, eight anti ship missile launchers, torpedo tubes and the surface to air missile defense system is the navalized s-350. That’s not a corvette.

Whatever the name, they sound impressive!

They are considered Corvettes by modern definition – https://en.wikipedia.org/wiki/Corvette

I’d be cautious in accepting anything on Wikipedia as definitive. If it’s so than we need to get the International Astronomical Union involved to provide in depth classification of missile corvettes. I mean if project 20380-20386 are missile corvettes at 2200 tons, robust anti-ship, anti air, and ASW functions (multirole) what are the karakurt class corvettes at 800 tons, no ASW and limited aerial point defense only? Dwarf Corvettes, anyone? Projects 20380, 20385 and the new Mercury (20386) are Frigates, in my opinion. But I’m not prepared to fight out an edit war on wikipedia or debate the point with the Russian Ministry of Defense. Let them employ their disguise.

The tonnage is not as important as the role.

Yes and this ship, not that tiny at all, is multirole. An embarked helicopter. With hangar. Eight anti ship/ land attack cruise missiles. ASW and anti torpedo weaponry. And what other Missile Corvette anywhere in the World has a surface to air missile capability anything remotely close to this class of ships? None. It is more than a mere Missile Corvette. 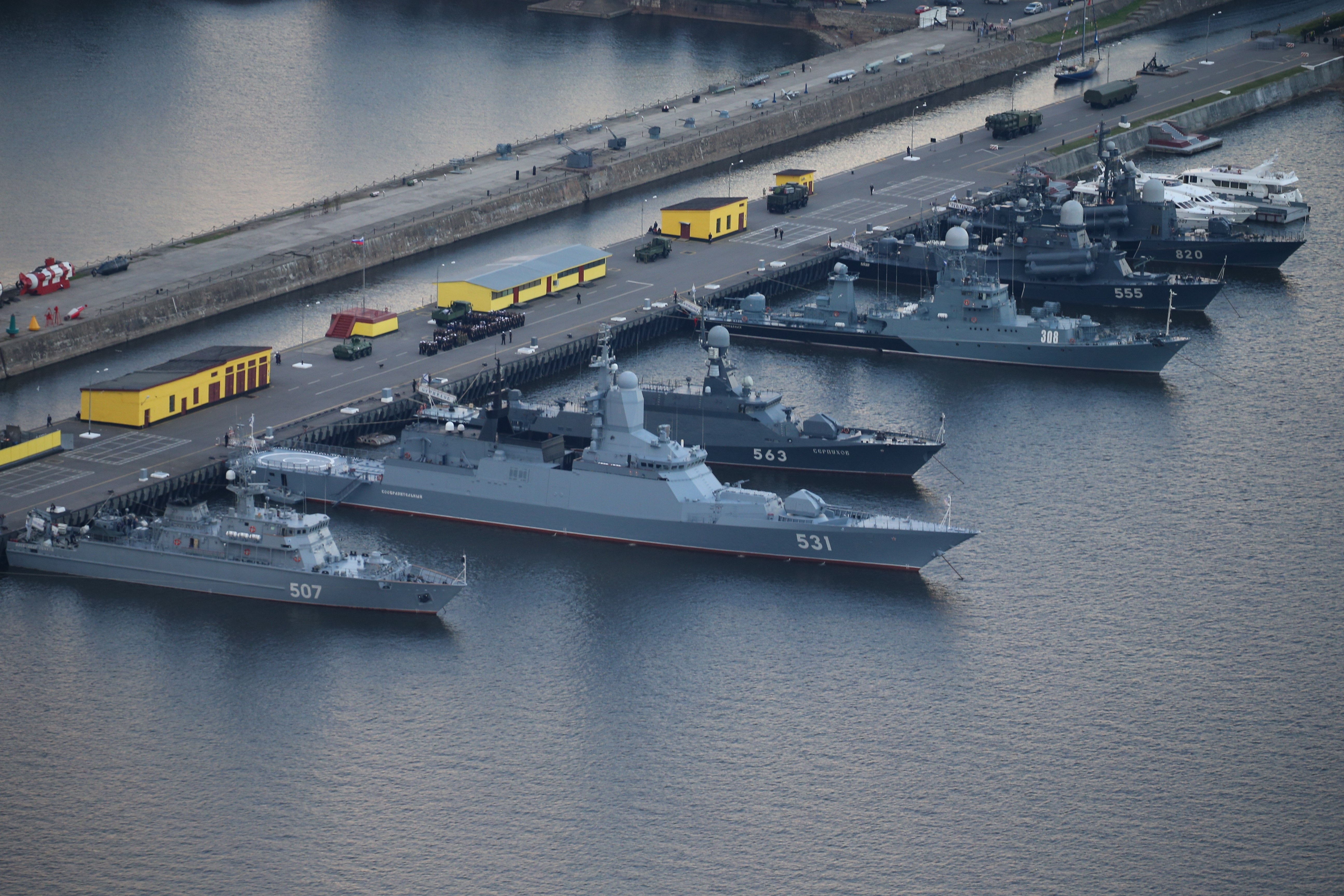 And Tiny? There are six surface combatants in this photograph, taken probably in St. Petersburg. Five are Russian corvettes and one is a minesweeper. Only one has a helicopter and hangar. Only one can destroy attacking torpedoes and only one has a robust surface to air missile capability. Only one combines both ASW and Cruise Missile armaments. That one ship, the “tiny” one we’re talking about and that is the subject of this Checkpoint article is the one that catches your eye in the photo above. At the very least, it’s a super-corvette, complete with blue water escort capability. One could be forgiven and even encouraged to call it…a frigate.