Press Secretary: Biden Exempt From His Own Mask Order Because He Was ‘Celebrating’

Psaki: "We have bigger issues to worry about." 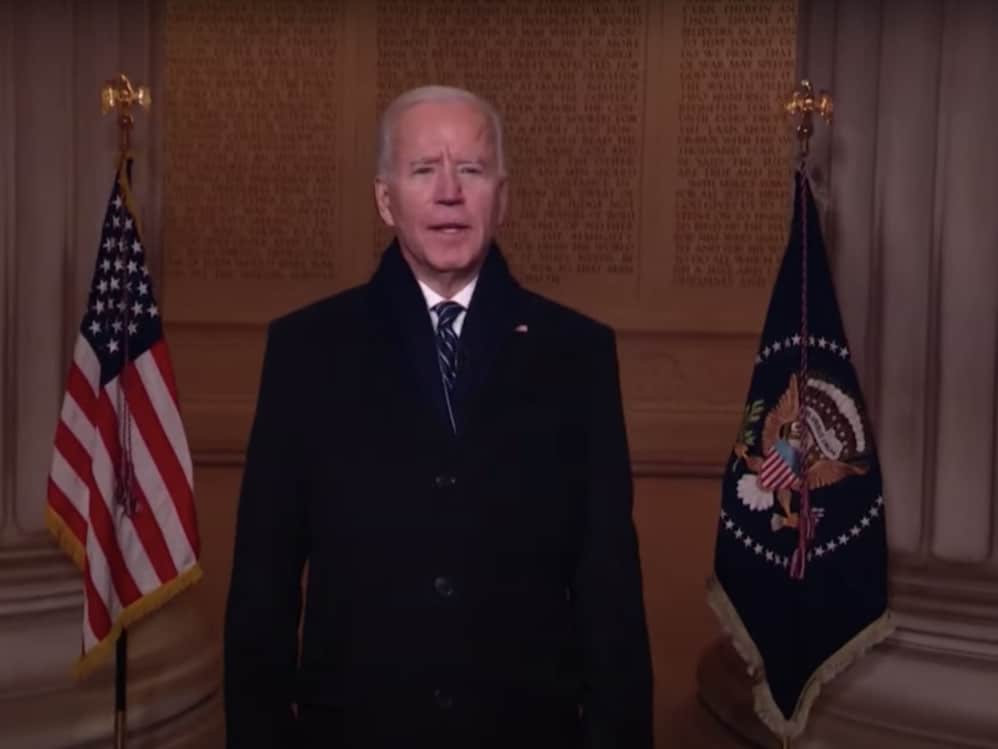 President Joe Biden asked Americans to wear masks for at least 100 days, but he thinks he is exempt because of his inauguration celebrations.

Biden signed an executive order on Wednesday, mandating the use of masks on all federal property.

“Wearing masks isn’t a partisan issue — it’s a patriotic act that can save countless lives. That’s why I signed an executive order today issuing a mask mandate on federal property. It’s time to mask up, America,” he wrote on Twitter.

Wearing masks isn't a partisan issue — it's a patriotic act that can save countless lives. That's why I signed an executive order today issuing a mask mandate on federal property. It's time to mask up, America.

Despite his recent mask order, the new president and his family were spotted parading around the Lincoln Memorial without face coverings during Wednesday evening’s inauguration celebrations.

Biden signed a mask mandate requiring everyone who is on federal land to have to wear masks.

Here is Biden tonight at the Lincoln Memorial, which is on federal land, not wearing a mask: https://t.co/Q1T01mrq29

Here's Biden addressing the media, all of whom are wearing masks, while he continues to not wear a mask pic.twitter.com/J5XlCY4uzi

When asked on Thursday why Biden so clearly violated his most recent executive order concerning face coverings, press secretary Jen Psaki said the president’s “historic day” should be viewed as an exception to the rule.

“He was celebrating an evening of a historic day in our country,” Psaki said.

When pressed further on the issue, Psaki merely shrugged off the reporter’s concerns about political hypocrisy and said the administration has “bigger things to worry about.”

“Yesterday was a historic moment in our history. He was inaugurated as president of the United States. He was surrounded by his family. We take a number of precautions, but I think we have bigger issues to worry about,” she concluded, despite previously noting that Biden signed the mask mandate as “a way to send a message to the American public about the importance of wearing masks and how it can save tens of thousands of lives.”

Why wasn't @JoeBiden wearing a mask last night after signing a mask mandate?

Press Secretary Jen Psaki: "He was celebrating an evening of a historic day…He was surrounded by his family…We have bigger issues to worry about."

Biden wants you to follow the rules that he won't. pic.twitter.com/P5xy0CireG

Biden joins the ranks of other government officials and politicians such as Speaker of the House Nancy Pelosi, California Gov. Gavin Newsom, Chicago Mayor Lori Lightfoot, and many others who have violated their own lockdown orders, mask mandates, and COVID-19 virtual signaling to live their lives normally while telling their constituents to stay home and cover their faces.

So lemme make sure I have this right: people from all over the country can go to DC by the thousands to celebrate an event that’s important to them, but visiting families for the holidays was immoral and wrong?